Since he was 14, in one form or another Adam Farley has been involved in growing produce. For around 20 years, Adam toiled for other people's operations so when the opportunity arose to purchase an old vineyard near Swan Hill, he jumped at it and Murray Valley Organics was created. 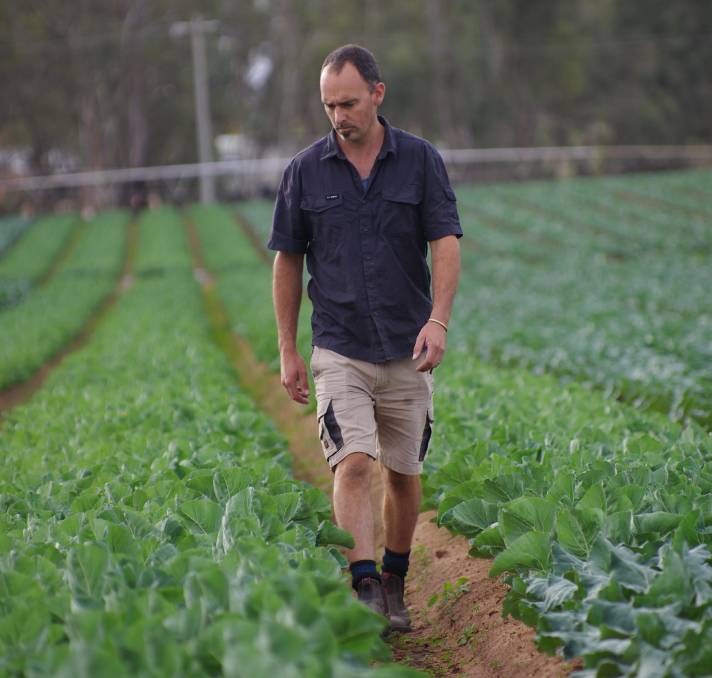 Since he was 14, in one form or another Adam Farley has been involved in growing produce.

For around 20 years, Adam toiled for other people's operations so when the opportunity arose to purchase an old vineyard near Swan Hill, he jumped at it and Murray Valley Organics was created.

Murray Valley Organics is on nearly 50 hectares at Wood Wood, 35 kilometres from Swan Hill, on the banks of the Murray River.

Out of those 50 hectares, Adam is only farming 20 as he finds his feet.

He is looking at expanding in the future to use the other 30 hectares growing organic feed, but at the moment he is solely focused on growing the best vegetables he can.

Murray Valley Organics predominantly grow broccoli and cauliflower, but also dill and garlic, and zucchini in the summertime.

"It is our first year doing cauliflower and garlic but they seem to be doing well," Adam said.

"I had the agronomist out and he was pleased with them.

"Broccoli is our main focus and they are going really well.

"We did it last year for the first time, although I have grown them for other people before.

"We went well early last year but variety selection can be a bit tricky in spring time as the weather can be difficult - you can have 41 degrees one day, 21 the next and no varieties enjoy that.

"So we learned to spread the risk over three or four varieties for that September time slot.

"We stop sowing the second week in September which gives us an early December harvest and I am normally out for Christmas."

Adam has plans to add more lines to his summer zucchini crops, possibly some capsicums, but doesn't see right now as the optimum time.

"Being a new business and water being so expensive, I'm not sure that now is the best time to be trialing new crops," he said.

"We have found a bit of a happy spot with the broccoli and cauliflower, and the zucchini has been going well in the summer, so adding another summer crop is on the agenda but I want to consolidate what we have going at the moment.

"We only have a 210 megalitre water license and I want to make the best use of that.

"We pump from the Murray River, up a channel and into a dam, and the farm gets watered from there.

"As water is critical to our operation we try very hard not to waste any."

As Adam is year round farming, soil health plays an integral role in crop productivity.

"Those three composts are mixed together and added to the soil via a manure spreader.

"In the future we will look at green cropping, using a lupin or legume crop, as a nitrogen fix.

"Last year water was too expensive to do this though.

"One of my three hectare paddocks really needs it so I am hoping this year we can put a green crop in.

"I would like to do more but with the costs involved I will have to pick off bits of the farm at a time and get the whole farm done over a few years."

When it comes to pests, Adam said climate at his Wood Wood location takes care of most of them.

"I'm pretty lucky, especially with my brassicas," he said.

"We begin planting in late February-early March and if we do get any moth action, the first frosts come in and take care of them, and I don't really need to do anything early.

"It's the same coming out.

"Once you get to October, you don't have any more frosts but we are all over by late November-early December.

"So the need for any spraying is very minimal.

"We are pretty lucky just from where we are climate-wise.

"Insect-wise, I have never had a problem but I have only been on the site three years.

"I have never really had to chase any insects away.

"Even if you get the odd moth or caterpillar eating a leaf, as long as they are not getting to the head there is no real reason to go out and spray.

"With the dill, the pests don't really like it anyway.

"We can get an aphid, but the weather mostly takes care of them too.

"Sometimes, I have had to go out and put a vegetable oil on with the boom."

As the day-to-day running of Murray Valley Organics takes up more and more of Adam's time, he has less of it to use sitting in a tractor.

Luckily for him, he has two reliable helpers in the wings to assist.

"My dad and my father-in-law are both retired and keenly help out on the farm," Adam said.

"It is a real benefit as it allows me to do all the organising and return calls and it keeps them busy as well."

Adam markets the majority of his produce through Butler Market Gardens as he has a long standing association with Rick Butler.

"We went to tafe together to do our horticultural certificates," he said.

"We kept in contact over the years and when I wanted to grow for myself, he gave me somewhere to sell to."

The story A strong passion for vegetables first appeared on The Land.