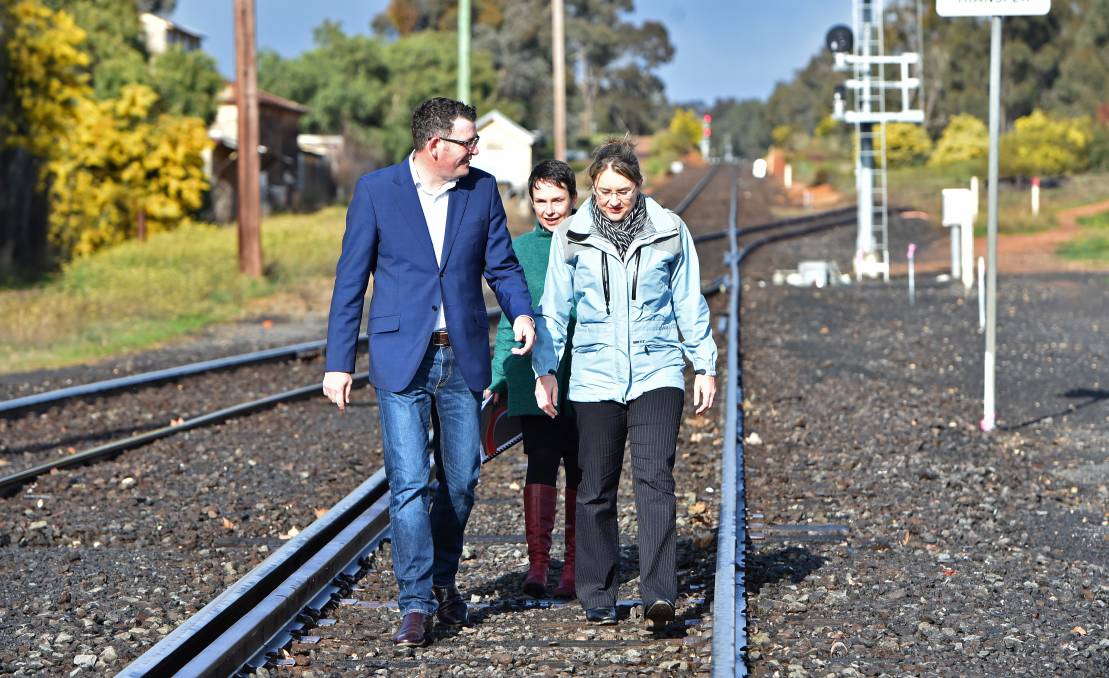 Grain haulers and accumulators are urging the state government to release the revised business case for the contentious Murray Basin Rail Project, ahead of a predicted bumper harvest in the north-west.

Industry insiders are predicting nearly 70 per cent of this summer's grain harvest, is now expected to go by road, rather than rail, to port.

They say 3.5 million metric tonnes of export grain will be produced - in previous years about half the crop would have gone on rail. It's estimated that equates to the equivalent of 107,000 B-Double return trips from the north-west to Victorian ports.

The claims come as one of the biggest operators, GrainCorp, says it is yet to see the revised MBRP business case. The business case was revised, when the state government ran out of money, to complete the project.

"We were exceedingly disappointed there was no reference to the MBRP in the federal budget, especially since the business case has gone through to the federal government," GrainCorp's Peter Johnston said.

"The business case has not been shared with industry, which makes it extremely difficult for us to understand what the recommendations are, or are not, in it."

Work on project, to standardise lines from the north-west to Melbourne, stopped in June last year, when the MBRP was only half finished. It was meant to have been completed in 2018.

Mr Johnston said no other operator, who he'd spoken with, had seen the business case.

"We appreciate, and understand, there are certain restrictions on what can, and cannot be discussed.

"But ulimately all industry players want to see the business case, so we can contribute, proactively, to get a better rail system operating in Victoria.

"Without knowing what the content is, it makes it very hard, for business and industry to make future investments."

The MBRP was shovel ready and there was a clear benefit in returning the Mildura line to the capacity it was, prior to the project commencing.

"It' something the industry needs - growers have an expectation we provide a world-class supply chain to get their product from farm gate to port and international destinations."

He said GrainCorp would now be looking to the state budget for further announcements.

Farmers were being incentivised to built on-property storage or buy trucks, to carry grain to port.

"Once those assets are in place they will utilise them, instead of the rail assets and the facilities many bulk handlers have in Victoria," Mr Johston said.

The rail system, under its current configuration, would also struggle to cope, he said.

"In conjuction with other industry players, we have pretty much utilised all the (rail) paths that are available. The network capacity is tapped out - its maximised.

"Economically it is far better for us to get grain onto trains, but if the pipeline is full, and we can't get any more paths because the network doesn't have that capacity, then it will go on trucks."

The price differential between road and rail varied depending on how far the grower was away from port.

"Growers can see a rail based price will give them more dollars in their pocket."

Road rates varied, depending on availability of trucks, but using rail was "well and truly north of $20 a tonne."

"Our position remains that the Victorian government should complete the project as per the original business case, as this would benefit the whole industry," Mr McBride said.

Emerald Grains David Johnson also confirmed the company had not been shown the business case.

"We do not have a position on the funding of the MBRP, but obviously still support the state and federal government working together to complete this project as soon as possible," Mr Johnson said.

"Ms Allan has previously said she wouldn't release the project's business case without the support of the federal government,' Mr Fraser said.

"Given Minister McCormack's support, we fully expect the revised business case to be released now."

The VFF has repeatedly called for the details of the project to be unveiled, to enable the grains industry and wider rural communities to view the State Government's plan to get the project back on track

"While it's very disappointing the project received no funding in the federal budget, it is fair enough for the federal overnment to expect feedback from stakeholders on the business case for the project.

"As a result, the Victorian government has no alternative other than to release the details of the stalled project now to ensure there's time to scrutinise the details ahead of the state budget," Mr Fraser said.

"We simply must ensure this promised once-in-a-generation project, to revitalise and standardise Victoria's freight rail network, is delivered as planned way back in 2015.

"Rural Victoria is crying out for major infrastructure projects to stimulate the economy and provide much needed local jobs."

Mr Fraser said it was staggering to think the state could be heading into 2021 without any funding on what was billed as a major project for rural Victoria.

"Victorian farmers should already be experiencing the benefits of the project that was scheduled for completion in 2018."

"The ball is in the court of Minister Allan and the Victorian Government," Mr Fraser said.

And Ms Allen was attempting to rewrite history by handballing blame for the stalled project to the federal government, according to Victorian National Party leader Peter Walsh.

He said Ms Allan's claims that Victoria has been let down by the lack of federal budget funds to restart the stalled project couldn't be further from the truth.

"The Labor government was handed a fully-funded project and botched it, leaving our north-west producers and stakeholders saying they're now worse off than when the project started.

"Rumours have been circulating for months that Jacinta Allan is seeking a cheap exit strategy because her failed mismanagement has blown out the total cost of the project from $440 million to more than $1 billion."

He said producers and stakeholders should be reaping the benefits of more efficient links to Melbourne's port, but instead were left with a barely half finished mess.

A Victorian Auditor-General Office report on the government's failed handling of Basin Rail found "completion of the MBRP is a year overdue, with over twice the original budget now estimated as necessary to complete the project to its original approved scope"

Mr Walsh said Ms Allan must come clean on how the government would fix its mess by releasing the revised business case for consultation.