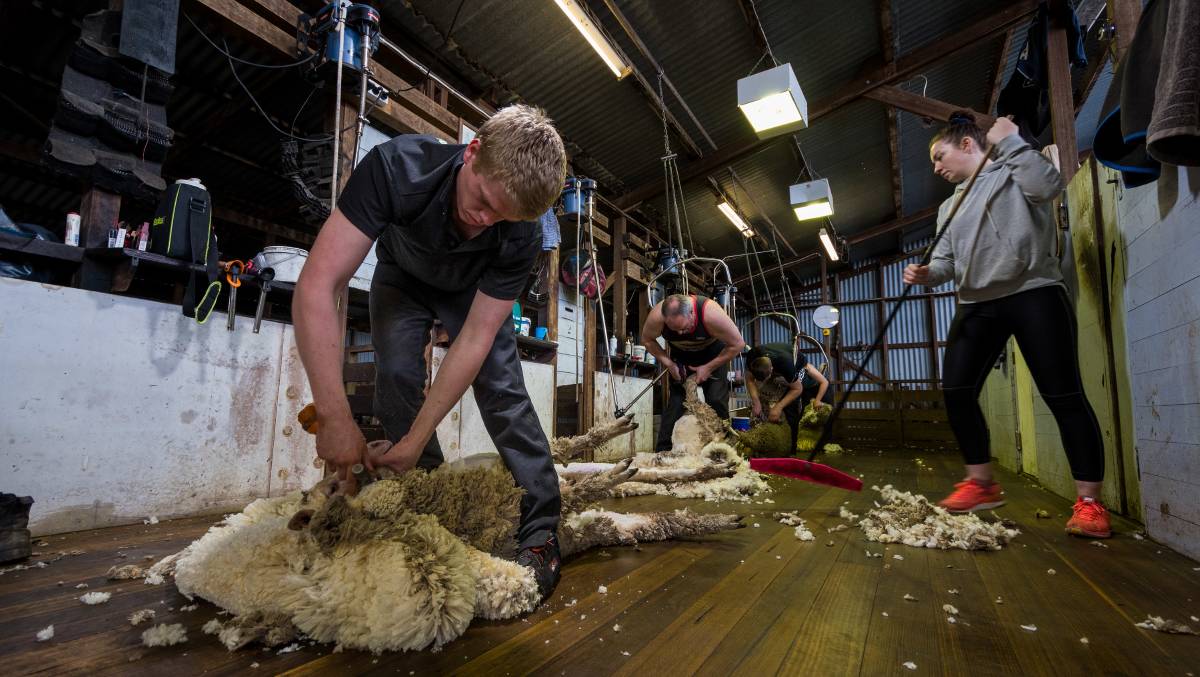 WINDING DOWN: Tasmanian shearer Sam Byers (front) is waiting coronavirus out in Tasmania, but the season is winding up soon.Photo by Phillip Biggs.

Tasmanian shearers are facing financial limbo as the state's border control measures force them to stay in the state or face lengthy and expensive quarantine.

Not classed as essential workers, shearers are not able to gain exemptions to enter Tasmania, and the state was left without its injection of New Zealand and interstate shearers it relies on for a speedy season.

As the Tasmanian season begins to wind up, Tasmanian shearers and interstate shearers who were in the state before the pandemic face financial uncertainty and the inability to find future work once the season finishes up in the state.

NSW shearers Aryn Bazeley and Ben Reinke travelled to Tasmania in March, before the pandemic reached its peak, and intended to travel interstate and New Zealand.

"We had planned to do some travelling, go back to New South Wales, maybe South Australia, New Zealand, but the pandemic has just pushed everything back," Ms Bazeley said.

The pair met last season in Tasmania and planned to travel together, which is not unusual in shearing circles, but they had decided to stay in the state for a second season.

"We found that we really liked it here, the people were all really nice and it's beautiful," Ms Bazeley said.

But then, the pandemic hit, the borders closed and the pair became stranded. Luckily they got some work for the most recent season, but they said they didn't know what would happen once the season ended - in about three weeks.

"For us there's a lot of uncertainty, financially it will have an impact," Ms Bazeley said.

She said they were unsure about what the future held, but Ms Bazeley said she hoped to return to New South Wales to support her sister, who has recently given birth. However, Ms Bazeley said she wasn't sure if she would be able to go home - she is trying to secure an exemption, so she doesn't have to quarantine.

"If I have to quarantine at both ends, in New South Wales and Tasmania, then it's a month where I would have been working and earning an income, it's a lot," she said.

Mr Reinke said he planned to stay in Tasmania, but he had no plans once this lot of work dried up.

"I don't really have any future plans at the moment, unless something comes up," he said.

Primary Employers Tasmania chief executive Felicity Richards said the shearing season in Tasmania was pushed to its limits due to the border restrictions.

She said Tasmania's shearers had put in long hours and long days to ensure they could meet all contract commitments because the New Zealand and interstate shearers were unable to support the workforce.

"It's been a really stressful period for a lot of shearers and for farmers," she said.

Ms Richards said sheep, like the fruit and vegetable crops, need to be shorn at this time of year to reduce the risk of diseases such as flystrike, which can be rife in summer.

She said farmers timed shearing for the pre-lambing period, before spring, to ensure there is less impact on the ewes before they give birth.

However, the state government has focused its support on the horticulture industry, which is gearing up for its harvest season, but no such help was forthcoming to woolgrowers and shearers.

Tasmanian shearer Sam Byers has travelled to South Australia for the past three years but is waiting out the pandemic working in the state.

"It's a good lifestyle, you learn a lot by going to a new area, and meeting new people," he said.

Mr Byers, who is from southern Tasmania, said he typically did the Tasmanian season, then moved to South Australia on a prescribed path.

However, he said this year his plans were on hold - mostly because his home is interstate.

"I bought a caravan and live out of that - but I left it in Victoria thinking that I'd only be in Tasmania for a short time, then the second wave of the pandemic hit Victoria."

Mr Byers had to quarantine in a hotel when he returned to Tasmania in March and said he wouldn't do it again.

"It wasn't really good for someone like me who loves to be outside, I was stuck in a hotel room," he said.

He said even if he did not have to pay for quarantine, which is the case in Tasmania now, he wouldn't do it again. Instead, he will wait in Tasmania until borders open.

"I will head back interstate as soon as I can," he said.

My Byers will stay in Tasmania and has work contracted with Launceston-based shearing company Steve Rigby Shearing.

Twice as long to finish season

Owner Steve Rigby said the season had been tough, without the usual influx of interstate workers to help bolster his workforce for the season.

"Every job we did ended up taking twice as long, so we did push the deadline for a lot of farmers," he said.

"But it was to ensure we did the job safely, with the appropriate social distancing in place."

Mr Rigby said he could operate only every second station, to ensure physical distance, which meant only half the typical workforce worked on a particular job.

He said the Tasmanian season was one of the roughest, but he was proud the industry had pulled together to get the job done.

However, he said he was advising a lot of his workforce, particularly those who interstate workers isolated in the state, that they'd better start looking to secure their next contract. He said he wanted to help them find work, but the season was winding up, and it was up to them to see where their next job would be. If borders aren't open, he said many would have to consider the financial and time impact of quarantine.

The border controls have not only impacted the shearers though but also the steady flow of wool classers between the states.

Mr Rigby said a portion of his wool classers were from Tasmania, but he also employed partially from interstate. The shearing season in Tasmania will end in about three weeks.

The story Tasmanian shearers left in limbo due to state border restrictions first appeared on The Examiner.