Rock-Bank's online auction attracts as many clients as sale rams. 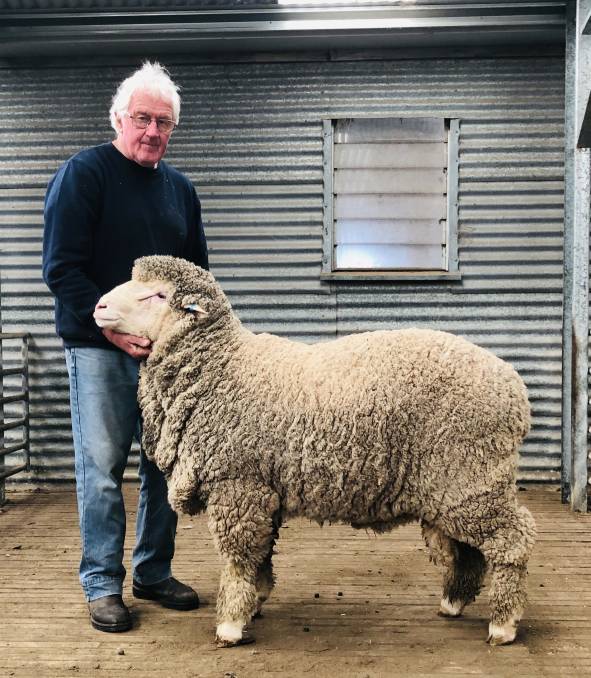 A Rock-Bank Merino is again heading across 'the ditch" to New Zealand, with travel restrictions proving no barrier to the successful bidder.

In the end, Merino Ridges, Ida Valley, New Zealand, was one of many repeat buyers participating in the online sale.

Due to coronavirus, Rock-Bank sold all its rams through Auctions Plus, although principal John Crawford said he was a little nervous at first

"It really worried me, but we had nearly as many clients, as we had rams," Mr Crawford said.

The ram weighed 102.5 kilograms, had a fat measurement of five and eye muscle depth of 42 millimetres.

Mt Challicum stud principal Phil Hartwich said there was "a fair bit of interest" in the top-priced ram.

"We just wanted a good Poll ram, he was what we were looking for," Mr Hartwich said.

"He will go over the first lot of Polls, we've got sorted - he is such a big-bodied, 'barrelly' ram with a lot of wool."

Mr Hartwich said Mount Challicum had been with Rock-Bank bloodlines for many years.

"We have Rafer semen before, so we know their breeding is good."

"They have a high genetic depth to them, and we are breeding polls that are very large sheep with high quality wools and high meat yield."

He won the 2018 Rabobank supreme Merino ram of the year at the National Merino Sheep Show and Sale, Dubbo, NSW.

"He has proven to be an outstanding sire," Mr Crawford said.

He admitted some concerns, after the recent drop in the wool market.

"Only 14 months ago, the wool market was really good and they were all making hay in the sun, while the meat side was really flying along," he said.

"But the buyers said to me they had done so well in the last four or five years,so they could afford to have a go."

He predicted the wool market would turn around at Easter, next year, and "slowly creep up again."