The stud recorded a higher average that 2019. 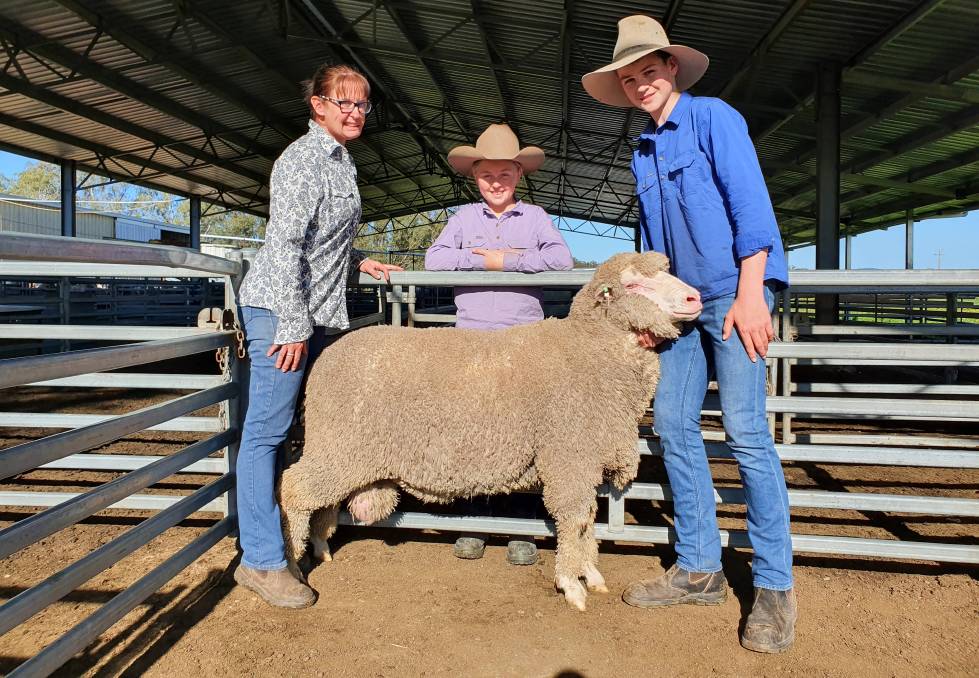 LOOKING GOOD: Toland Merino stud principal Anna Toland with Matilda and Charlie and one of the top-priced $7800 rams.

"I was a bit apprehensive before the sale and with the lack of clients arriving with trailers, it was hard to gauge how the sale would go," Ms Toland said.

The sale was conducted on AuctionsPlus, due to coronavirus restrictions, with buyers from NSW, SA and places about Victoria, including the north-east and Surf Coast, securing the in-demand rams.

Ms Toland said the rams presented exceptionally well, however, photos "did not do them justice" as 90pc of buyers opted to view them in the flesh prior to the auction.

"They have great carcase attributes and this is what our clients are going for ... they are able to turn off their wether lambs early as they reach maturity quickly and easily."

"They are plain, non-mulesed and this will help our clients to cease mulesing in the future if they wish to and they also have low worm resistance."

The top-priced rams, lots 13 and 29, were bought by return top-priced purchasers Phil and Jackie Muecke, Penola, SA, who bought four rams in total.

Lot 13 had figures of a six-kilogram post weaning weight (PWWT), 0.6 millimetres yearling fat depth (YFAT), 1.6mm yearling eye muscle depth (YEMD) and was tested to have 17.7 micron wool with a 100 per cent comfort factor and standard deviation of 3.1.

Lot 29 had a 4.5-kilogram post weaning weight (PWWT), 0.6 millimetres yearling fat depth (YFAT), 1.5mm yearling eye muscle depth (YEMD) and was tested to have 19.3 micron wool with a 100 per cent comfort factor and standard deviation of 3.2.

Border restrictions meant the Mueckes, who run a self-replacing Merino flock and produce first-cross lambs, had to visit the Violet Town stud overnight and then return to self-quarantine on their Penola farm.

"It's about a 550-kilometre trip one way so we took our caravan across and camped on the farm overnight," Mr Muecke said.

"The self-isolation hasn't been that bad because we stocked up but our daughter did at one stage drop some supplies off at the gate when we were running short."

Mr Muecke said he liked the Toland rams for their early growth and high fat and muscle which had figures to "back them up".

"We got knocked off the top last year but we've been purchasing rams there for about 18 years now," Mr Muecke.

"Where we are in the lower south-east of SA, it's a very similar climate and rainfall [to Violet Town] and we had trouble sourcing Merinos within our state that would perform well in our higher rainfall area, that was until we started buying from Toland Merinos."

The four rams will be joined to about 60 ewes respectively in January.

"We had to pay more than we anticipated but they were good rams and we got what we wanted," Mr Muecke said.