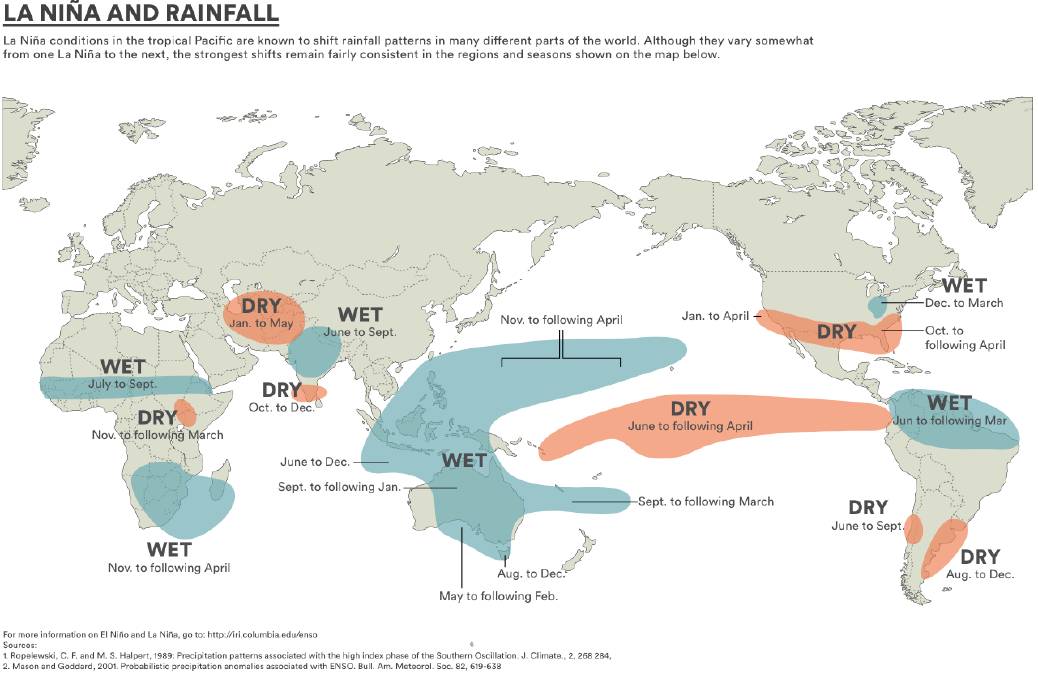 LA NINA: The worldwide effects of a La Nina event.

La Nina call likely to be made, next week.

The Bureau of Meteorology is inching closer to declaring a La Nina alert, but the organisation's Head of Climate Prediction, Dr Andrew Watkins, says it's still taking a cautious approach.

The Bureau's latest ENSO Outlook is at a La Nina alert, meaning there is a 70 per cent chance of one forming.

It's adopted a more conservative approach than the American National Oceanic and Atmospheric Administration, which has declared a La Nina.

Great to join forces with @VICSESChief to demonstrate just how little flood water can be dangerous for a small car. It will be wet over the coming months, so always remember; turn around, don't drown. https://t.co/2p3lPcT2zppic.twitter.com/rE18XL3mLr

"I think their call is a good one for the US, we will make the call, for us, early next week," Dr Watkins said.

"All the models, we survey, are suggesting we will go into a La Nina, in October, we are touching on some thresholds, in the Pacific Ocean, at the moment - it's getting very close."

That would mean the odds of a greater than normal rainfall for at least 80pc of the northern half of Victoria, with slightly lower odds for the southern half.

With Friday's forecast temperatures well below the September average, and the snow level dropping to 600m it's going to be a cold end to the week. Remaining chilly over the weekend, we'll finally see a slow return to spring-like temps next week. https://t.co/LfbMxz23yzpic.twitter.com/zLNSyiwFe7

"The outlook is pushing fairly firmly to the wet conditions, from October through to December, and October is looking like a wetter month," Dr Watkins said.

"It's not like the bureau declares a La Nina, a switch gets flicked, and it starts raining.

"It means we are likely to be locked into these wetter conditions, to the end of the year."

BOM have declared a 70% chance of a La Nina forming. A LN can result in wetter conditions for the eastern states.

This chart shows the average wheat production for each decade on the east coast (SA, VIC, TAS, NSW, QLD), along with the LN years singled out since 1900. pic.twitter.com/A89OORR4gL

A La Nina would also mean cooler than average days, with more cloud, "which will keep the sun at bay" and warmer nights, as damper soil trapped heat.

We are likely to see above-average rainfall across the eastern two-thirds of Australia, warmer-than-average days in the topics & Tasmania. Frosty mornings are possible in spring, particularly in WA:https://t.co/WUkqOW5IVepic.twitter.com/OhTSgpt86A

"The NOAA have a slightly different definition to us, we look for particular changes in the trade winds, in cloudiness, and soil and measurement of pressure," Dr Watkins said.

"We are looking at the atmosphere, and also the ocean, how cool the central Pacific Oceean is, and the Southern Oscillation Index, as a measure of pressure.

"What we are looking for is when the atmosphere and the ocean lock in together and that guarantees an event will happen, well into the summer and even into autumn.

Northern Tasmania weather is not quite past the winter chill