Regional easing as early as next week and relief for abattoirs has been mooted for Victoria. 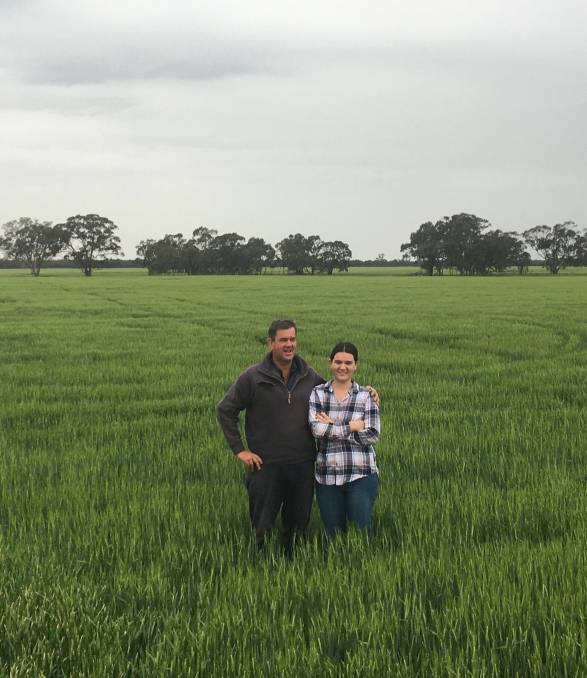 WIDE OPEN SPACE: Peter Mullan and daughter and year-12 student, Kate, live near Lalbert, a part of the state barely touched by the coronavirus, but remain under stage three restrictions.

ALL of regional Victoria could soon go straight to the third step of the reopening roadmap.

With daily new COVID-19 case numbers in regional Victoria averaging less than five a day this week, there were increasing calls for an immediate easing of restrictions outside the metropolitan area.

The calls come as the Department of Health & Human Services announced on Thursday that the daily average case number for regional Victoria was 4.5 and 70 for metropolitan Melbourne.

"If the trend continues, and the numbers are very promising, we'll be able to take a step, or steps, as early as toward the end of next week," premier Daniel Andrews said on Thursday..

Earlier Mr Andrews said the move to step three could happen "very soon" although mystery cases would need to be investigated to identify the source of those cases.

"I think there will be some relief for regional communities very soon," he said.

Mr Andrews also gave the meat processing industry hope of an easing of tough regulations currently limiting production to 66 per cent of capacity.

"We know that the next period, in an ordinary year would be amongst the busiest periods of the year," he said.

"We are trying to work out how we can do it safely; let them flex up a little bit, but not compromise the amazing work they had done," he said.

He said there had been no significant problems with the abattoir sector for "many weeks" and that was a credit to them and those who had created a "culture of absolute safety".

He said it was unfortunate that regional abattoirs had to have the same settings as those in metro Melbourne.

Mr Andrews said if regional works were on a different setting, the work being done in metro areas would be "pushed out to the regions and they would become a higher risk workplace".

He said the government was working with abattoirs to develop arrangements that allowed abattoirs to "do more but not pose a higher risk".

"I'm confident we will be able to make some changes there," he said.

"It's only possible because of they have done an amazing job. We've seen a real culture change and that's an absolute credit."

Andrews announced that regional Victoria would go to the second step on the reopening roadmap on September 12.

He also said that regional Victoria would go to the third step when the 14-day average daily case number had fallen below five with no new unknown source numbers, but with no start date.

Lalbert farmer Peter Mullan said it wasn't too hard to break the state up into areas.

"Look after your own back yard. I think we are behaving pretty well, it's people who are trying to escape their own problems that can create problems for us," he said.

"If they split off the north-west part of the state we could live a reasonably normal life."

He said he was concerned about his children.

"Realistically they should have been at school the whole time," he said.

"My kids haven't seen anyone and that's terrible. As a farmer we are used to working by ourselves, but we look forward to social events for months."

Agriculture and industries such as abattoirs in particular cite their adherence to the stage three restrictions that had achieved low levels of new cases as a good reason easing should be considered at a quicker pace.

Under the roadmap plan, the meat and food processing sector is heavily restricted with workforce restrictions and would remain at that setting.

Abattoirs had been operating under reduced staffing numbers of 33 per cent, or 66pc of capacity, as well as mask wearing, additional personal protective equipment in some sectors, staff record keeping and practicing good hygiene including auditing of cleaning schedules.

Rules around staffing density and movement in abattoirs should be similar to that allowed in the general community, industry says.

Australian Meat Industry Council executive officer Patrick Hutchinson said his members in Victoria needed an immediate lifting of the staff limits from 33 per cent of capacity to 20pc, or 80pc of total capacity.

Mr Hutchinson said the numbers of people permitted to move within the workplace should be commensurate with what existed in the general community.

A move to 20pc would give the industry the opportunity to process effectively the rising number of stock reaching the market as spring hit, he said.

"Regional abattoirs are in areas where there are no COVID cases. They have managed their staff really well, testing and managing the human aspect and workplace safety, but even with good spacing they can only operate at restricted capacity," he said.

"There should be individual risk assessments on every plant. We are coming into a big spring lamb season and grass-fed cattle season and people were looking forward to this year being a recovery mode."

He said abattoirs were spending extraordinary amounts of money to meet the requirements. The industry can't afford to lose any more abattoirs out of the state. Victoria is very lucky we have a diversified ownership of abattoirs," he said.

The industry had already managed diseases such as Q Fever and Anthrax that could make humans seriously ill "and even kill them", he said.

"The industry is well practiced at biosecurity and managing these diseases," he said.