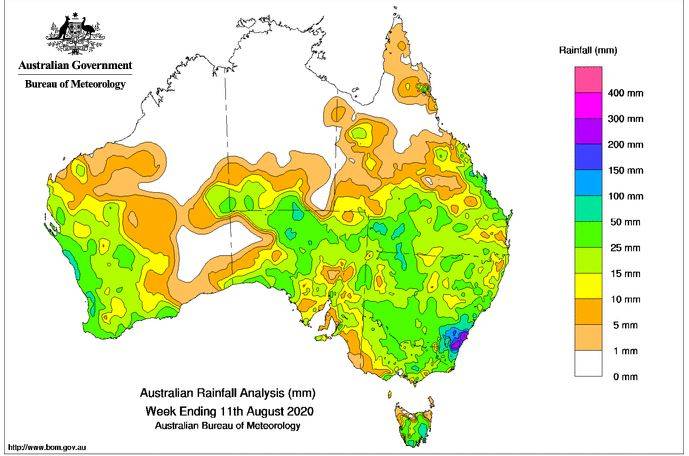 There was excellent rain over Australia's cropping regions in the past seven days, with more on the way.

Australia's winter crop is on the brink on one of the biggest Cinderella stories on record, with improvements of up to 70pc expected.

Analysts are becoming increasingly confident in yield predictions that will lead the nation to what could be one of the biggest year on year recovery in crop production in the past 50 years.

And Australia could also set to recover its mantle as one of the world's largest wheat exporters after two well below average years caused by the east coast drought.

Rain across the nation in the past week has either bolstered prospects of a bumper harvest, with the majority of regions looking at average to above average yields, or shored up crops in the short term in areas getting dry.

And there is further room for upside, with StoneX senior derivatives dealer Nick Orssich saying estimates could be ramped up again in the next round of estimates if current favourable weather patterns persisted.

In particular he said there could be further additions to the NSW crop, which is already set for an incredible 450 per cent year on year increase.

Both ANZ and StoneX have issued national wheat production numbers in excess of 26 million tonnes, which is above the historical mean, while Rural Bank is flagging a 45pc rebound in the total winter crop.

ANZ's agri research director Michael Whitehead said his organisation was expecting a crop of 26m tonnes, which would be a 71 per cent year on year increase on last year's 15.2m tonnes.

He also flagged wheat exports of 17.5m tonnes, which is an incredible 90pc year on year rise with east coast ports set to resume exporting rather than importing intercontinental shipments of grain as they have for the past two years.

At StoneX Mr Orssich said the expectation was for a wheat crop of 26.87m tonnes.

Central to the figure is a NSW crop of 9.2m tonnes, over 4.5 times last year's crop of 2m tonnes.

"There's certainly a really good rebound in NSW, the central west looks really good, the far north-west cropping area where there was virtually no grain is also looking much better so this is a critical part to the rebound in national production," Mr Orssich said.

However, he said there was an even spread of grain across the country.

"Prospects are good in most regions, in central Queensland and the upper Eyre Peninsula things are not so good, but across nearly all other key growing regions things are in average or better condition."

The bullish assessments from the grain trade come on the back of excellent and timely rain in many regions.

"Crops in areas through the Central West that struggled to do a tonne to the hectare last year will be likely to go 4.5-5t/ha this year," Mr Orssich said.

Across to Western Australia he said crop yields were not likely to be impacted by the dry start and the wind blasting that meant some crop had to be resown in autumn.

"The yield is retrievable, it was still at a time when the crop could be replanted so no area was lost."

He said falls over the past week consolidated rain in late July.

"Prospects are improving in the west and that adds a lot of grain to Australia's bottom line."

Greg Kuchel, Rural Bank regional agribusiness manager, based in Swan Hill in the Victorian Mallee, said crops through northern Victoria and southern NSW were back on track after rain.

"There was a positive start, then a very dry winter had people nervous, but then we had 15-25mm over the weekend which has improved crops out of sight and the short term outlook is promising for a little more, so we'd still be targeting above-average yields in this part of the world.

It all adds up to a potent combination when assessing Australia's chances of having a bumper harvest.

Mr Orssich said he felt there was more chance of projections going up rather than down over coming months, although cautioning that depended on weather.

"There is definitely scope for the entire national crop outlook to move higher if conditions are favourable over the next couple of months," Mr Orssich said.

The rain, however, was not, so beneficial for all.

On the NSW South Coast there was over 400mm in places like Nowra, following up from a similar heavy rain band a fortnight ago.

The rain caused flooding and disruption to the region's agriculture sector, which include oyster producers and dairy farmers.

The story Record recovery in crop production on the way first appeared on Farm Online.