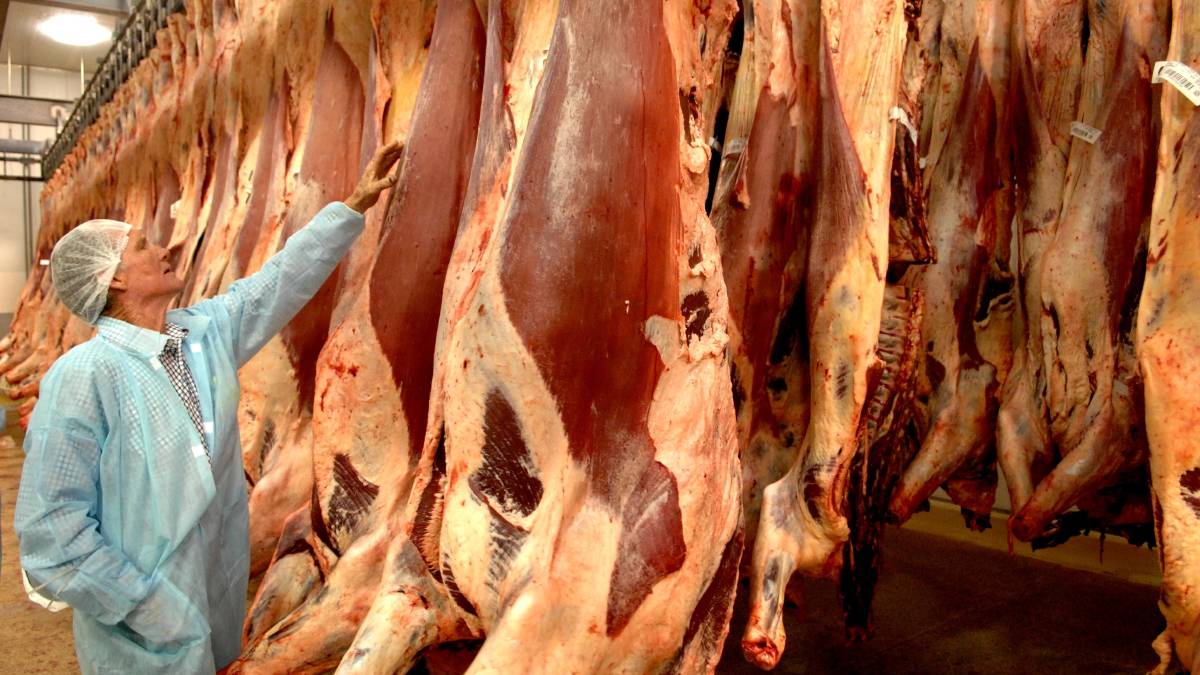 JBS SHUTDOWN: JBS' Brooklyn abattoir is back operating, after one of the two unions representing workers at the site tried to shut it down, over coronavirus concerns.

Victoria's biggest abbatoir, JBS' Brooklyn, is operating as normal, after WorkSafe Victoria declared there were no health and safety risks at the site.

A union health and safety representative issued a direction, at 5am on Tuesday, for staff in the plant's cold storage area to cease work.

The direction was issued on the grounds there was an "imminent risk" to employees from coronavirus.

Its believed about 45 workers in the cold storage area walked off the job.

But a site inspector from WorkSafe Victoria, who investigated the complaint, found there were no health and safety issues and ordered everyone back to work

The United Workers Union, which covers the 150 cold storage staff, said the action was in line with the Victorian Occupational Health and Safety Act.

The UWU is one of two unions representing workers at the site, but the action meant the plant would have again had to close.

The safety claims have been rejected by JBS and the other body representing the majority of workers on the site, the Australasian Meat Industry Employees Union.

The stopwork comes after 71 positive cases connected to the JBS outbreak, and 15 days after the abattoir was ordered to close by the Department of Health and Human Services.

The UWU has since said JBS senior management, workers, health safety representatives and the union had a constructive meeting this morning.

"The company has now agreed to a 30 minute separation between shifts, so workers are not forced into a confined space during change over, and agreed to give workers a safety briefing before they start," a spokesman said.

"They have also provided workers with clear details on cleaning regimes for all high touch areas, the laundering of shared equipment, and on the provision of PPE.

"Because of these changes, workers have now returned to work."

Victoria's biggest abattoir has been cleared to reopen

United Workers Union Victorian branch secretary Susie Alison, said the company had not responded to many of the workers' concerns about the safety of the site.

"These workers have been battling through this crisis with almost no support.

"They don't want to have gone through all that only to walk back onto the floor and catch the virus."

Ms Alison said workers across the country were getting wise to the way companies thought profit was more important than people.

The UWU had written to JBS, asking them to explain how they would keep workers safe.

But the union representing the majority of workers on the site said its members wouldn't be joining the industrial action.

"We seem to be mangaging working through the issues, but it will mean it will stop production - our guys won't be able to work either."

Mr Conway said he hoped the dispute would be resolved quickly.

The AMIEU had been in constant contact with JBS senior management.

"I would say, credit where credit is due," he said.

And JBS has said it had worked hand-in-glove with DHHS to make the Brooklyn facility as COVID Safe as it was possible to do.

"Right now, our focus is on safeguarding the jobs of the 1230 Victorians who rely on us for their livelihood, safeguarding the supply of meat to both our local and export markets," a JBS spokesman said.

"Just yesterday, the AMIEU, with whom we have an excellent working relationship, went on record saying that they were satisfied we had done everything possible to make our workplace COVID Safe."

Ms Alison said the company responded by telling the union they would meet with them, only after workers return to work.

In a notice to the company, JBS cold storage workers told the company that "without safe systems of work and without adequate information, instruction and training" there would be a "serious and immediate threat to... health or safety, namely a high threat and degree of risk to the COVID-19 contagion".

Ms Alison said In one alarming report, a worker who returned to the site on Monday, July 27, had yet to complete 14 days in isolation.

The worker remained on site for more than an hour before being sent home.

There were also lingering questions over JBS' conduct, in the lead up to the outbreak.

Workers had reported that social distancing measures were inadequate, with afternoon and day shift crossing paths in a confined space with no social distancing, balaclavas were being shared between workers and management had not taken concerns raised with it seriously.

Workers have been forced to isolate over the last two weeks, some forced to draw upon their leave annual entitlements while others were left without any income at all.

In one case, a JBS worker who was saving his annual leave to help care for his soon to arrive newborn.

Ms Alison said the mother would be getting a c-section and would need help caring for the child.

Like many workers, the company started subtracting the worker's annual leave without his consent.

The union has been calling on JBS to provide additional paid leave for the workforce.

Workers felt the extra paid leave would be a fair compensation after they contracted the virus at work and through no fault of their own.

The union asked JBS to provide workers with information on how they will manage:

. Supply and use of appropriate masks

. Laundering of cloth masks and other Personal Protective Equipment

. Cleaning in particular of high touch and traffic areas

. What type and when will hygiene training take place

. Screening of current and/or new employees for coronavirus