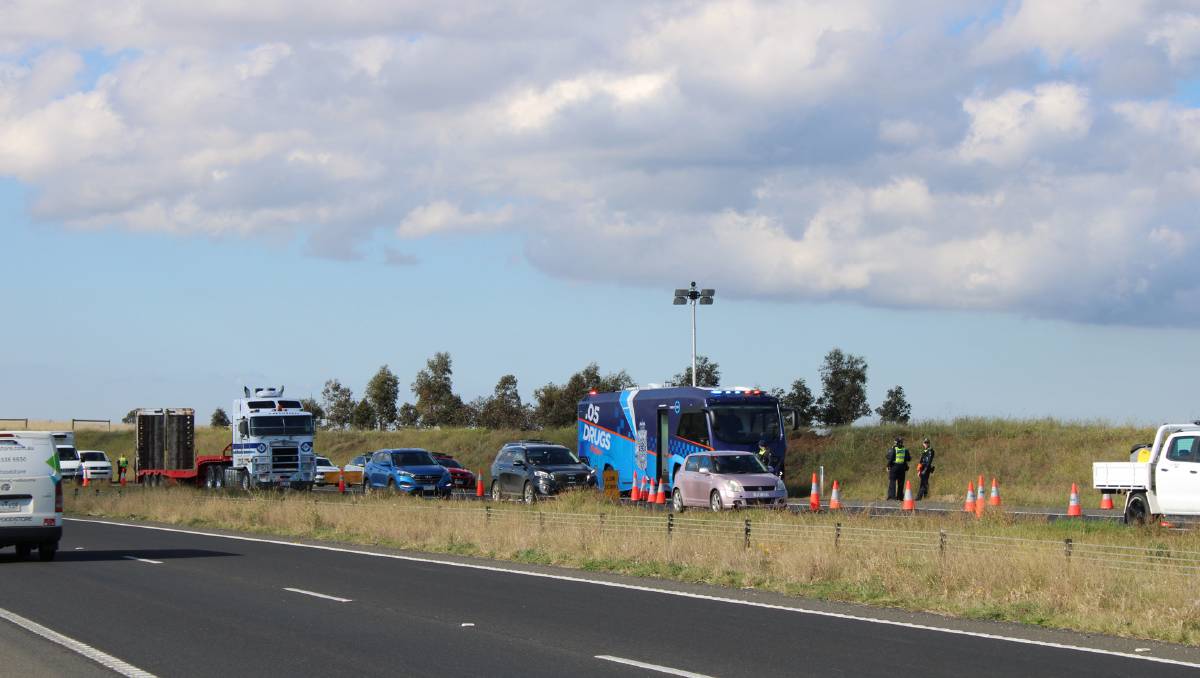 CHECKPOINT: The Victoria Police checkpoint, near Bacchus Marsh, on the Western Freeway.

Victoria Police have advised primary producers, farm workers and contractors to carry identifying documents with them, during the current coronavirus lockdown.

All of metropolitan Melbourne and neighbouring Mitchell Shire are under stage 3 lockdowns.

"If you live in these areas, there'll be only four reasons to leave your home: shopping for food and essential items; care and caregiving; daily exercise; and work and study, if you can't do it from home,' Victoria's Chief Health Officer Brett Sutton said.

Shepparton's Senior Sergeant Ross Brittain said permits would not be issued for farm owners or employees. But he said farm work fell under the travel exemptions.

"There'll be no permits, for checkpoints, but you should have some sort of evidence, " Sgt Brittain said.

Documentation should validate where the person was from, what they were doing and why they were going to a particular area.

"If you have an Australian Business Number or a rates notice, or some kind of paperwork to show you live in Mitchell Shire, and have a property in Strathbogie (for example) that should be fine."

He said it seemed that every second person police spoke with had a valid reason for moving around.

"People tell you all sorts of things," he said.

"But, as they say, we're all in this together and we are trying to stop the spread of this disease."

Dogs may be a good coronavirus "defence"

"The checkpoints will be operational 24 hours a day," the spokeswoman said. "Police will be intercepting vehicles at random to ensure they are complying with the restrictions.

Premier Daniel Andrews said 546 fines have been issued since Stage 3 "Stay at Home" restrictions were reintroduced throughout metropolitan Melbourne and Mitchell Shire.

Police had conducted more than 100,000 checks since enforcement began in March.

Operation Sentinel has been underway since March and has seen an even greater police presence in and around the 32 Local Government Areas with Stage 3 "Stay at Home" restrictions reimposed last week.

"Farmers' Markets are part of the communities, where they operate, and it's important everyone there feels comfortable, including the people who run those sites."

She said there had been few people from Melbourne, visiting regional markets, even those in tourist hotspots.

"It's locals, from the region, going to those markets - more and more it's clear those markets are being supported by local communities."

She said she felt Melbourne residents would still be able to go to metropolitan farmers' markets, as buying food was one of four reasons to leave home.

Suppliers of metropolitan markets would also be exempt from travel restrictions.

"It is a direct supply and they are coming from their farm to the market at around four and five am.

"They also have really good protocols to hand over their produce."

She urged farmers, travelling to markets in the restricted zone, to have a booking form, they could share with police at checkpoints.

"Most of them are obviously in work vehicles," Ms Archdeacon said.

"So far, our experience with police has been very positive

"They are visiting the markets regularly and saying they are happy with what they are seeing." McIvor Farm Foods, which raises Berkshire pigs at Tooborac, has again switched selling systems, as a result of the latest lockdowns.

McIvor's Belinda Hagan said she felt it would be "business as usual.

"It's not easy, but, at the same time, we are just going to do what we did last time," Ms Hagan said.

"We do have some restaurants back up on board in Bendigo and we will make deliveries to them as contactless as possible."

The farm runs a herd of mostly Berkshire pigs, an old breed, which acts like a natural four-legged plough, to turn the soil and add nutrients back to the paddocks where they live.

The farm also planted seasonal crops, such as daikon radishes, grasses and grains that carried water down into the soil to create the ideal conditions for bugs, worms and "critters " to grow.

But once she said McIvor started attending markets again, she had noticed they were doing a great job of managing social distancing and hygiene regulations.

She said, despite that, the pandemic offered the business a time to refocus.

"Do we go to farmers' markets and sell 'x' amount of dollars or products, or do we stay at home?

"Our health is of greater value, and that's a question we should all be asking, as businesses.

"We saw this as an opportunity to reassess, we are having a bit more family time, and financially we are doing okay, so we can do this.

"We keep adapting, rolling with the punches."

Currently, McIvor was selling through the Bendigo Mini-Market, at The Good Loaf, at Lancefield, where the market had been set up on the football oval, at Watts Fresh, Kyneton, and offering home deliveries in the local area.

She said as McIvor had become more focussed on a regional market, the coronavirus pandemic had not really affected the business.

"Our business decisions are not changing, but we will need to adapt, if this goes on forever."

Ms Hagan said the business had a strong following in Melbourne and was running its farmgate shop by appointment only.

"We do have a unique product you can't access anywhere else."

If Melbourne residents did come to Tooborac to buy products, they would have proof of purchase, in the form of a receipt.

She said the family was mindful of travelling around, only going to the shops and coming home.

She said 80 per cent of her eggs were going into the restaurant and cafe trade.

"I used to go all over Melbourne, as far as Nagambie and South Yarra," Ms Docking said.

She said she was now involved in four different "box" programs, which had grown since the first restrictions were imposed.

"We had trialled them, before COVID-19, but it has strengthened considerably."

She said they had waned a little, as restrictions had been eased, but she was predicting sales would start going up again.

"Im not sure how its all going to pan out," he said.

"At the moment, we are deemed essential, so they would be fine to come to work."

While it was quiet in Victoria at the moment, he said he was about to start work in NSW, shearing at Conargo, Boolligal and Ivanhoe.

He said he hadn't been affected too much, during the first shutdown.

"I had a four stand shearing shed and could only use two, so it took us a week to do the work, which runs costs up."

He said he was concerned about what would happen, when he came back from NSW.

"If I have to quarantine, when I come back in the middle of spring, I'll lose two weeks of work, which is just impossible."

Wayne Shields, Peninsula Fresh Organics, has a farm at Barham, on the Murray River, growing lettuce, leeks and broccoli.

Mr Shields also farms at Baxter, on the Mornington Peninsula, which is part of the latest lockdown area.

"There is just a bit of rigmarole in trying to find the right form, for my trucks, so they can come and go, when I need them to."

He said staff were being allowed to travel across the Murray River.

"We all know what's going on, we know what we can and can't do.

Livestock and Rural Transporters Association Victoria president John Beer said after some initial hiccups, the permit system for travel into South Australia and NSW seemed to be working well.

"We have had a good go, we can't complain - the trucks are being given the green light and getting waved through."

Llivestock operators were classed as an essential service.

But he warned drivers not to take non-working passengers and to ensure they had all their paperwork in order.

"If you have a passenger they will be looking and wanting to know, so if it's a two-up driver, or a worker with the stock, make sure you are okay."