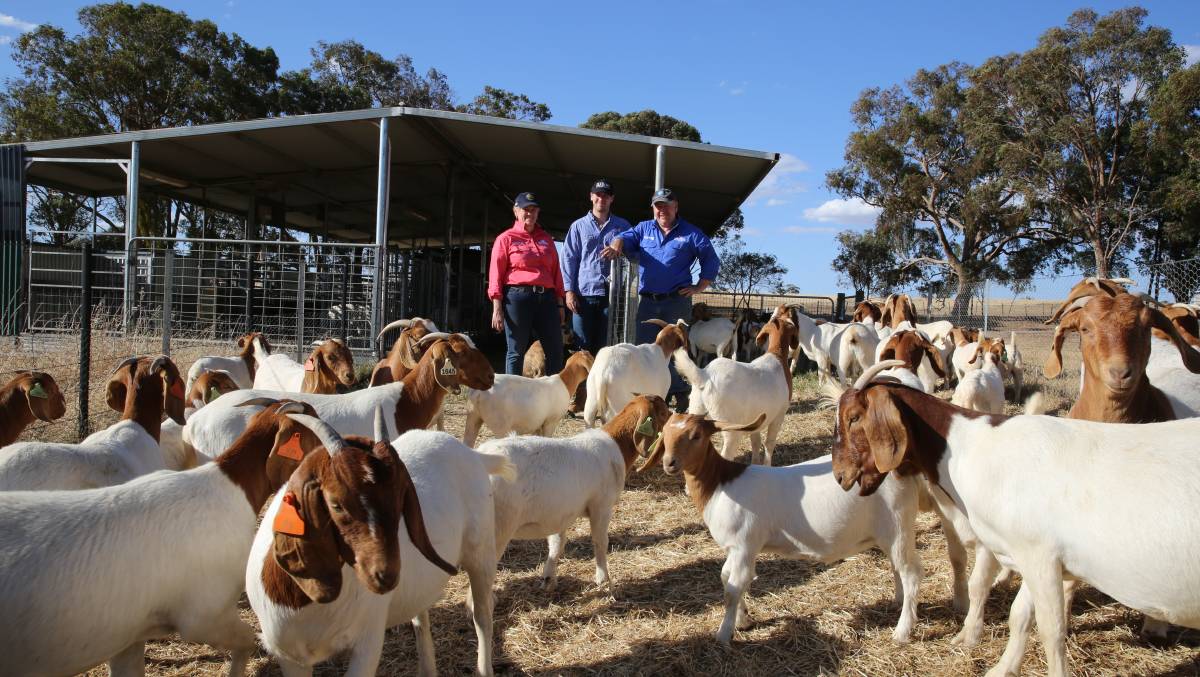 It was mid-March and Victoria's state government had announced a string of tough lockdown measures aimed at easing the coronavirus curve.

Boutique restaurants in north-central Victoria were calling to cancel thousands of dollars worth of fresh goat meat as the new restrictions halted the state's foodservice and hospitality sector almost overnight.

Mrs McKenzie, who along with husband Peter, were bemused.

What would become of the 11 goats she had earlier that day picked up from the butcher?

How it all began

Born in Swan Hill and raised in the southern Riverina and Mallee, Mrs McKenzie had an inkling or two about what was required to run a large-scale farming operation.

Complementing her on-farm experience growing up was a degree in business and a background in transport, which saw her move to Perth and later to the Gold Coast with her family to oversee the integration of bus services during the 2018 Commonwealth Games.

In 2018, the family returned to Boorandarra Farm at Mangalore, an 80-hectare property they had purchased four years earlier.

"When we bought the property the former owners Frank and Dorothy Brown asked what we would like to do with the Boer Goats, and we decided to buy them," Mrs McKenzie said.

That moment laid the foundations for what would later become Strathbogie Goat, a small but mighty full blood Boer goat stud focused on providing premium quality meat to local restaurants and specialised outlets.

"I wasn't that fond of sheep because they require shearing and mustering whereas with my goats I can go out into the paddock and they come to me when I call them," Mrs McKenzie said.

Three bloodlines are used in the stud each for different traits; one for good length and form, another for muscling and a third bloodline for its all-round ability.

A downturn in business brought on by COVID-19

With phone calls starting to filter through to cancel orders for goat meat as Victoria entered lockdown, Mrs McKenzie was left without a market to on-sell her premium goat meat.

Prior to COVID-19, the business was "viable" and reporting positive gains towards the end of 2019.

Its success continued to grow when local eatery Palling Bros Brewery saw a steady increase in their dish sales with Strathbogie Goat Tacos becoming one of its most popular dishes, according to Mrs McKenzie.

But after the collapse of hospitality more broadly in Victoria - and little to no options for wholesale customers - alternate markets spaces were considered to promote the brand.

With the help of Meat & Livestock Australia, a co-marketing initiative was adopted which included market research, evaluations of carcase quality and defining product and pricing options for retail sales as part of a 10-week social media campaign.

Mrs McKenzie enlisted her local butcher, Taurus Fine Meats and Smokehouse, Seymour, and a social media creator and began spruiking her goat meat to an online audience for retail sales.

The butcher developed a rolled loin Strathbogie Goat product with stuffed apricot and pistachio which has proven to be a strong success with locals during lockdown.

"It was the first time ever I'd sold out of loins," Mrs McKenzie said.

"We went from selling maybe five kilos to over 70 kilograms within a month."

Initially, Mrs McKenzie was sceptical of the social media campaign and was required to outlay several thousand dollars for the 10-week campaign which included content creation to bolster brand awareness.

The plan involves co-marketing with the Seymour butcher which sells the meat through their business.

"I needed to be proactive and assist them in their business solutions, not just providing a product, but giving them something unique that gives them a point of distinction," Mrs McKenzie said.

Local businesses who use the goat meat, such as the local pizza shop at Avenel, also receive cross-promotion on the Facebook and Instagram accounts.

"The pizza shop rotates between a special menu which offers goat or lamb on a particular week and usually the goat sells out within a few days," Mrs McKenzie said.

"The businesses in Avenel have increased their intake by two thirds since we've been co-marketing them on our social media platforms and that's all been during COVID-19."

Mrs McKenzie said the cost to develop the social media campaign would take up to 10 months to recoup but believes it has lifted her profile from "being amateurish to being fair dinkum".

"It's given me a greater level of brand and market awareness and it really focuses on the niches that we're ethical, sustainable and environmentally friendly," Ms McKenzie said.

Often meat goats are processed between 13 and 15 kilograms but Strathbogie Goat grows its animals out to 23 kilograms.

"That's where I think I get the best meat and bone yield because otherwise it's just not enough meat on the bones if you're doing prime cuts," Mrs McKenzie said.

"I've only been doing this a year and I'm getting better all the time but usually it takes an extra 12 months to get them to that heavier weight.

"Some of the better genetics usually only take a bit over six months but it really depends on the genetics."