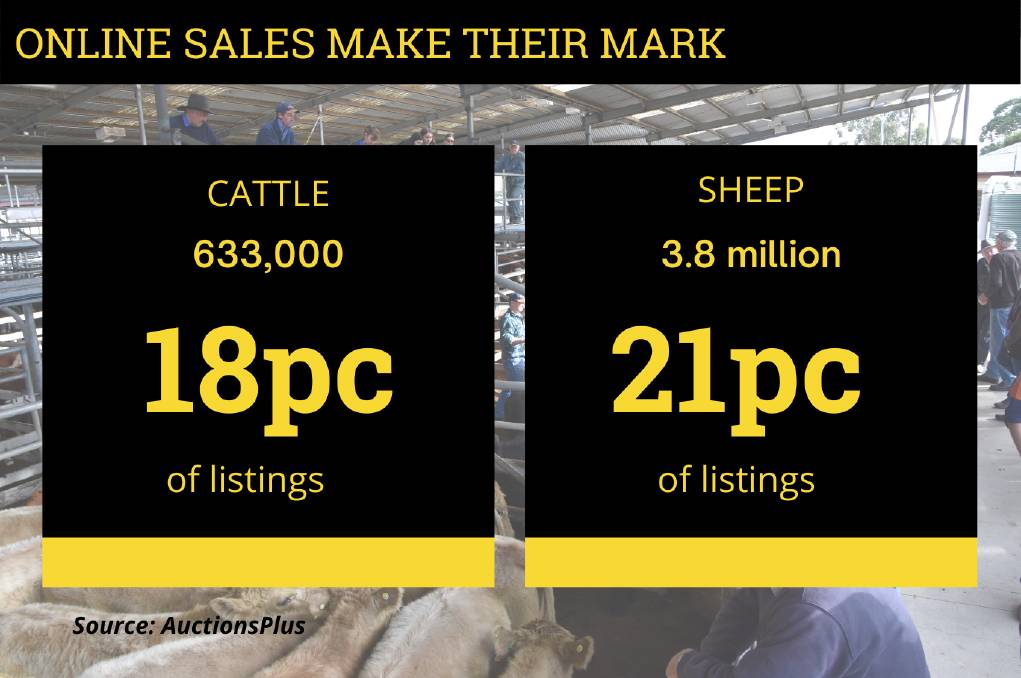 ONLINE AND UPWARDS: AuctionsPlus says it is selling up to one in five head of cattle offered at auction, whether on its platform or in bricks-and-mortar saleyards.

Around one in every five cattle and sheep offered at auction are sold via the AuctionsPlus platform and, the saleyards association believes that, five years from now, online bidding will part of normal sale days at half of Australia's saleyards.

Around one-in-every-five head of cattle and sheep offered at auction are sold via the AuctionsPlus platform and the saleyards association believes that, five years from now, online bidding will be a normal part of sale days at half of Australia's saleyards.

In the financial year just ended, AuctionsPlus listed 633,000 cattle and 3.8 million sheep, up 62 per cent and 24pc respectively.

AuctionsPlus commercial manager livestock Anna Adams said the numbers represented approximately 18pc of all cattle and 21pc of all sheep offered for sale on the platform and at saleyards.

It had partnered with seven bricks-and-mortar saleyards to offer an online option to physical attendance, Ms Adams said.

Online sales at those yards were typically 10 to 15pc of the yardings and up to 28pc.

Ms Adams said the use of online bidding at conventional saleyards had been in the wings for a long time.

"It was certainly fast tracked by COVID restrictions but there were a lot of saleyards who had considered it for a number of months, or a number of years, in the lead up to that," she said.

Rival online platform StockLive is owned by AAM Investment Group, which had its network of eight RLX saleyards roll out online bidding as the pandemic unfolded.

"We've been having up to 1000 people watching a sale on any particular day."

Ms Adams said while some of the AuctionsPlus sales may have come at the expense of saleyards, online sales could help smaller yards maintain viability.

"If we're bringing more buyers to those yards and it maintains that level of competition, it gives vendors more confidence to send their stock there," she said.

"It has certainly brought another level of competition to those sites and their sales."

Australian Livestock Saleyards Association executive officer Mark McDonald said there were upsides to the rise of online bidding for vendors and buyers at the 65 to 70 saleyards operating at least fortnightly across the country.

"The benefit, in theory, is that you can have more buyers participate, apart from just the ones who physically turn up," he said.

Saleyards had to compete with out of paddock sales and direct to processor arrangements but set the pricing across the industry.

"Selling direct or between farmers, the pricing will be based on recent saleyard prices for similar stock ... as long as there's enough saleyards operating often enough to get that good public market information, the industry is in good stead," Mr McDonald said.

"Online sales are a competitor to us but the real competitor for saleyards are direct sales."

Mr McDonald said there was a perception that selling direct was more cost-effective but saleyard fees represented a very small percentage of the sale value, around $300 for a $30,000 sale of 20 steers, for example.

"I often wonder whether some of these people who sell direct will actually start selling direct without going through an agent and then they potentially can save a lot more."

But Ms Adams said livestock agents had an important role to play, even in online sales to ensure security of payment and leverage networks.

"We certainly value agents really highly, they just bring a level of market knowledge and expertise," she said.

Mr Norris said Elite Livestock Auctions enshrined the traditional model of "an auctioneer standing over a pen of cattle in a saleyard" because it drove competition and agents offered valuable expertise.

"We're still in the bricks-and-mortar saleyards because buyers want to touch, feel and see the animals," he said.

Mr Norris said online services would bring added transparency to saleyards rather than replace them.

"Yes, we're seeing a little bit of a shift at the moment, obviously, with the COVID-19 restrictions," he said.

"However, once they ease, they'll be back to normal, saleyards will be here forever."

Ms Adams and Mr Norris both said it was more important than ever for producers to build their own brands.

In fact, within the next six to 12 months, AuctionsPlus would introduce new facilities for farmers to "tell their stories" and a rating system that would allow buyers to provide feedback on their purchases.

"With virtual reality and augmented reality, there's certainly a possibility they could have that pen of steers in their living room with them while they're looking to buy them online," Ms Adams said.

In any case, Mr McDonald said, the trend towards fewer, larger saleyards was set to continue.

"I don't think anyone would deny that, in maybe 20 years' time, there'll be a lot less saleyards, and a lot more of them will be run by the private sector," he said.