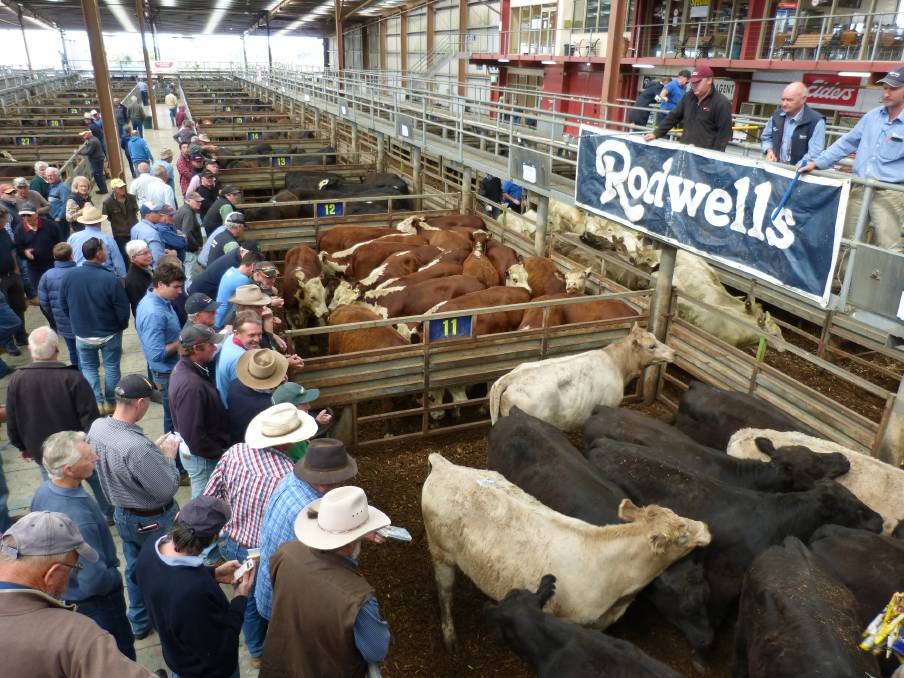 MORE RESTRICTIONS: A pre-coronavirus sale at Pakenham; now the selling centre has further tightened restrictions on the number of buyers, who can attend.

Buyers, turned away from the Pakenham store sale, say they're mystified by the decision.

Buyers turned away at this week's Pakenham store sale, have expressed their frustration at how coronavirus restrictions are being handled by the market operator the Victorian Livestock Exchange.

About a dozen buyers were turned away from the sale, after VLE staff told them they were not on the list of registered attendees.

Buyers from as far away as Swan Hill and Albury were turned away at the entrance.

They also said they'd met with objections to their attending a previous sale, at Leongatha.

Bruce Cook, Swan Hill, was one of the restockers and smaller-scale buyers, who were not allowed into the facility, due to coronavirus guidelines.

Mr Cook said members of the group, that had been turned away, were big supporters of the Pakenham sale.

"There were seven or eight of us, talking outside, and we worked out we had bought 500 cattle, between Koonwarra (Leongatha) and Pakenham in the past few weeks," Mr Cook said.

He said he was on the permanent list, but had been taken off it.

"We are buyers, not just lookers - there were another 500 head we could have bought, between us," Mr Cook said.

"There is no competiton for the cattle, it's not right for the farmers, selling cattle inside.

"Farmers are not getting the prices they should."

Mr Cook said VLE knew he was a genuine buyer.

"I was on the list at Koonwarra, where I bought 56 head, but at Pakenham they said 'you are not on the list, you can't go in'."

Mr Cook said he had also been turned away from sheep sales at Bendigo and Ballarat.

"I am just a farmer, I buy for friends, and do a bit of commission buying," he said.

More competition on the sale floor was good for farmers.

He said he operated seven farms in the north, and in Gippsland.

"We have good feed, up north, and I could handle 1000 head of cattle, myself, but can't afford to buy them."

"Victoria was looking good, we were starting to think we were going to be able to relax our restrictions," he said.

But the recent spike in coronavirus cases, and Cardinia Shire (where Pakenham is located) being designated a hotspot, meant restrictions had to be tightened.

"We asked the agents to nominate buyers, or provide us with a list," Mr Paynter said.

But he said the agents provided lists of potential attendees, which added up to more than 40 visitors.

"We had done that previously but we then asked them to refine the list for us, and restrict numbers further.

Mr Paynter said he had apologised to some of the buyers, who were turned away.

"If we get further outbreaks, it may well be that we are not able to have sales at the yard - there is a real possibility, we could be shut down.

"We need to do everything possible to restrict numbers and protect our business and the industry."

He said numbers would continue to be restricted, until VLE was advised otherwise, by local and state governments.

"We are trying to do our best here, to adhere to strict regulations.

"We are forced into restricting numbers and the only way we can control thatt is through the agents.

"It's out of our control, I want them back in, I want us having full markets and people being able to come and go, as they please."

Keith Chambers, Albury, said JBS and Coles had two buyers each, at the sale.

"What do you want two buyers from the same company there for?" Mr Chamers said.

"They deprived two other people of going into the yards."

He said he didn't know of the existence of a list.

"Doona Dan (Premier Dan Andrews) is trying to be a little dictator, and it's going to backfire on him," Mr Chambers said.

"In future, I have told my agent, in Albury, to ring VLE up and notify them I am coming.

"I can go anywhere else and walk straight in

"I did at Mortlake, two weeks ago, and Leongatha, three weeks ago. I filled out a form and walked straight in."

He said agents and buyers who knew him, asked why he wasn't allowed in.

Russell Motton, Russell Motton Livestock, Poowong, said it was the first time since 1970 he had been barred from attending a sale.

"We purchased 70 cattle at the previous sale and we had orders to buy around 120 head, but we were told we were not on the list."

Mr Motton said he'd been told VLE had to cut the number of people, attending the sale.

"I am not sure where the existing list came from, but they said they had to cut it,' Mr Motton said.

"We run our own business, and it's pretty frustrating when you come to the front door and get approached and told you can't go in."

As a public auction, reducing the number of buyers disadvantaged vendors.

"I do understand we are in different circumstances now, there are protocols, but there was no video link in place, to buy from.

"VLE hasn't got facilities like that to address issues if they are going to turn people away or not allow them in there.

"They should have had something the same as Mortlake, where people can purchase online."