ONE OF A KIND: Benambra brumby runner, the late Ken Connley, during the 2005 search for three people near Mount Hotham.

"The name Ken Connley is synonymous with the high country"

HIGH country legend Ken Connley, who lost a fight with cancer which prevented him from taking part in the recent brumby rescue, was the subject of a special tribute in the Victorian Parliament on Tuesday.

Bill Tilley, who represents the electorate which shares the same name as Connley's hometown, Benambra, recounted an action-packed life in the mountains, which also included cameo appearances in movies including The Man From Snowy River.

"The name Ken Connley is synonymous with the high country," Mr Tilley said.

"Ken was a master horseman, on a horse or in the bush, he was without peer.

"His contribution to the high country over the past 74 years was just as profound.

Mr Connley holds the record for the most wins in the Cattlemen's Cup at the annual Mountain Cattlemen's Association get-togethers and regularly competed in the Man From Snowy River Bush Festival. Mr Connley won the Cattleman's Cup seven times and was reported to have caught 364 brumbies off his famed horse, Ace, as well as winning his first four cups on him.

He was recruited to perform the bush riding scenes in The Man From Snowy River movie from the early 1980s as the double for legendary actor Jack Thompson, who played the role of Clancy.

Mr Connley also appeared in other movies, Quigley Down Under, The Light Horsemen and Red Hill; the latter movie starring Steve Bisley was set in the Omeo township.

Mr Connley also assisted on horseback in the 2005 search for a pilot and two passengers following a small plane crash near Mount Hotham. 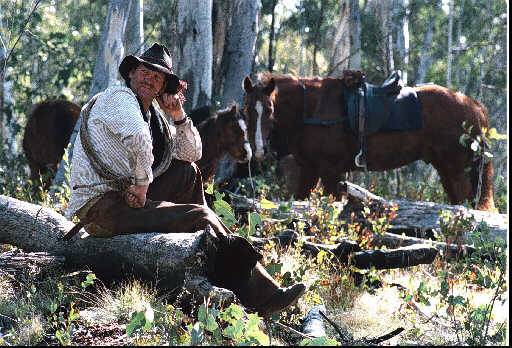 "Australian folklore loves a legend, a rogue, a character. Ken met all requirements and I can say he didn't die wondering," Mr Tilley said.

"He was a passionate advocate for the protection and use of the high country and committed to the proper management of the brumby.

"When mountain men were able to catch, run and cull, we didn't have a brumby problem. We had a tradition and a link to our past."

While actor Jack Thompson spent his formative years as a stockman in the Northern Territory, it was Mr Connley who taught him how to ride in the high country.

"Galloping downhill not something people do by choice - they walk down and gallop up - he taught me how to sit right in the saddle with long stirrups going down the hill," Mr Thompson said.

"He was the real deal. When Ken turned up essentially as my stunt double I was really fortunate because Ken was a man who really was a Clancy - a man who spent his life with horses and was extremely good with horses," he said.

"He was a generous spirited man and had a wry sense of humour... who's headed off into the great beyond."

Mr Connley once claimed the most dangerous stunt he undertook involved stepping out in front of 100 charging horses in The Man from Snowy River. He also played about 30 polo tournaments with the annual Geebung Polo Club, where he captained the Geebungs against the Cuffs 'n Collars on a high altitude plain.

In 1972, Mr Connley married Joan Irish, after meeting at the Bairnsdale Hospital in 1971 following a car crash in which he injured his back. Mr Connley and Joan had four children, Angela Shoemark, now of Albury, Tarina Pendergast, Benambra, Sharlee Cavill, of Alexandra and Christopher Connley, of Benambra.

Mr Connley was ill with bone cancer for the last seven months of his life, and cared for at 'Rosevale', Benambra, by his wife Joan Connley, his partner Heather and friend, Evan.