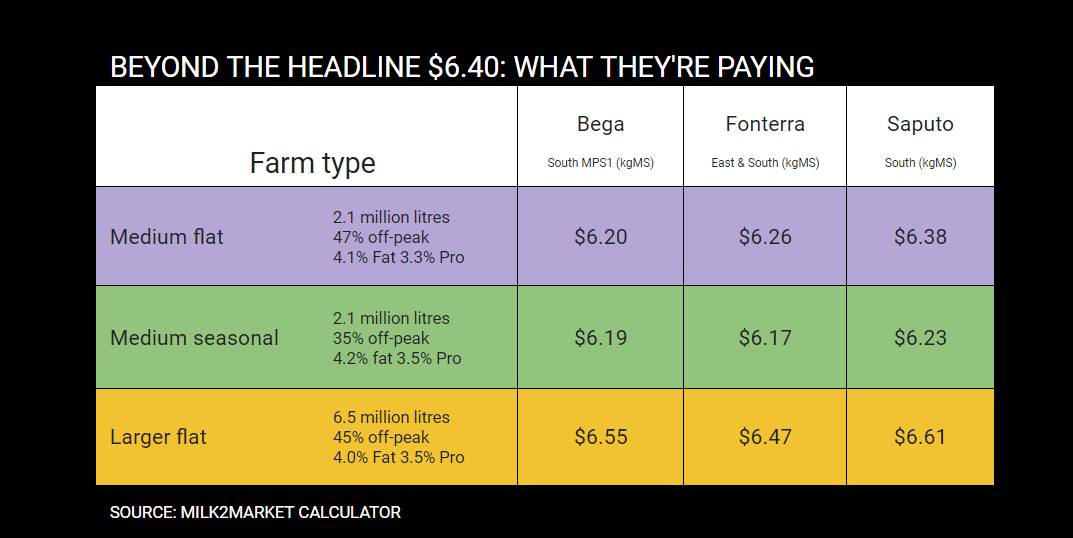 CORRECTION: The Milk2Market calculator originally returned a price of $6.51/kgMS if the "medium flat" farm was supplying Saputo under its south agreement but the correct price is $6.38/kgMS and the large flat farm would receive $6.61/kgMS, not $6.75/kgMS.

While Bega, Fonterra and Saputo have all announced a $6.40 a kilogram of milk solids price, the Milk2Market calculator illustrates the stark differences farmers can expect to be paid.

While Bega, Fonterra and Saputo have all announced a $6.40 a kilogram of milk solids price, the Milk2Market calculator illustrates the stark differences farmers can expect to be paid.

The range of incentives on offer as part of standard milk supply agreements meant even neighbouring farms supplying the same processor could receive quite different prices.

"It was tricky 10 years ago, it was tricky two years ago, and it's still tricky, but at least now the mandatory code has forced companies to publish their offers," Mr Lange said.

In response, Milk2Market makes a calculator comparing up to 68 milk supply contracts offered by processors across Australia freely available to farmers.

The dairy code of conduct's requirement for every farmer to sign a contract with their processor had brought added urgency this year.

"The period since June 1 has been very intense," Mr Lange said.

"I hope they'll release that pressure in subsequent years because, with the cooling off period, you really only have two weeks to sign up and then to be sure you're going to start that on July 1."

It was also possible to have shorter term contracts that did not all start on July 1.

"I think some of the bigger companies are to be commended for offering only non-exclusive contracts and being confident in their pricing ... and that has been a very positive outcome."

While the code required processors to offer non-exclusive contracts, some were heavily discounted.

Fonterra, for example, offered 50 cents a kilogram of milk solids less for non-exclusive supply but Mr Lange said that, in time, those disparities were likely to lessen.

"I don't think that's a sustainable model because the mandatory code enables split contracts, and as more and more people see the benefits of that, I think we'll see that difference competed away," he said.

"Not all contracts have to start on July 1 ... as long as it's got a start and end date ... the milk exchange will be trading all through the year, not just at the start, so that'll relieve some pressure."