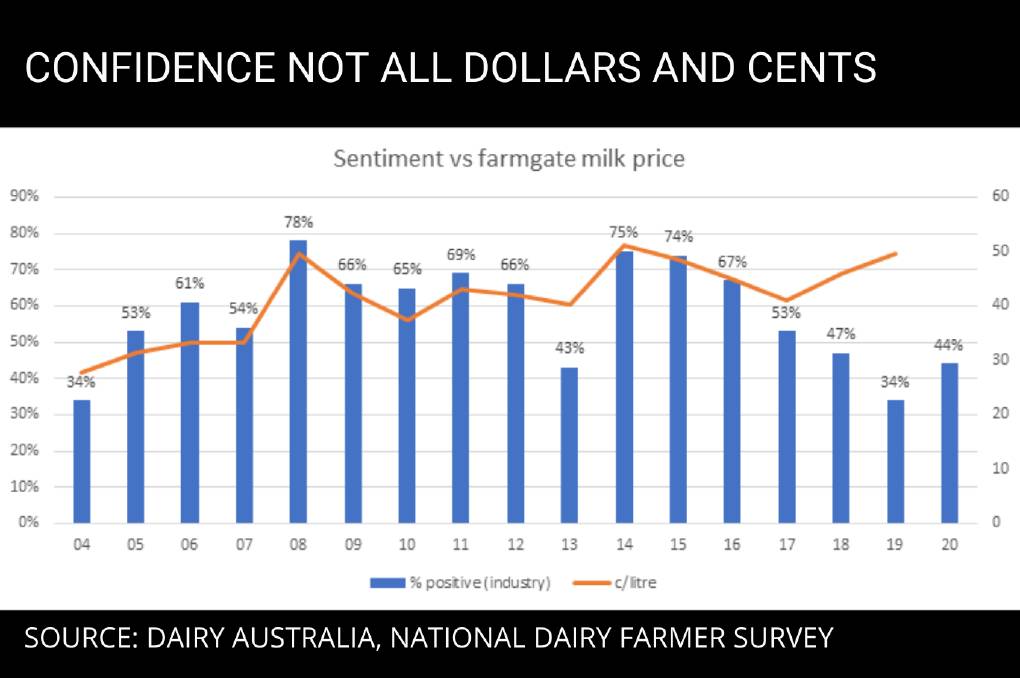 Dairy Australia has revised its forecast on the back of a rebound in dairy farmer confidence and surging production in Tasmania and Gippsland.

Dairy Australia has revised its production forecast on the back of a rebound in dairy farmer confidence and surging volumes in Tasmania and Gippsland.

"What a difference a year makes," was the opening line of DA's June 2020 Situation & Outlook report.

DA now expects a 1-3 per cent drop in production for the current year, putting the annual total between 8.5 and 8.7 billion litres.

Nationally, the five months to April were all higher than the same time last year and DA forecasts milk production to grow by 1-3pc in 2020-21.

The National Dairy Farmer Survey (NDFS) showed 44pc of farmers were positive about the industry's future in February, up 10pc from 2019.

But it's come off a low base and the uptick is isolated.

South and west Gippsland have had the best summer and autumn in many years.

All the way from January to April, Gippsland's production has been up by more than 20pc on last year, making it the only region in Victoria to record overall growth, at 6.8pc, for the season to date.

That boom showed up in the confidence survey, too.

Even though only 40pc of Gippsland dairy farmers felt confident in the future of the industry, a whopping 71pc said their profits were higher than the five-year average.

And, at 11pc, northern region farmers were also the most likely to say they may leave the industry within the next two years.

It seemed to be all about water: their main concerns were input and irrigation costs, followed by climate.

Northern Victorian production is showing signs of recovery since January and was 10pc higher this April than in April 2019 but the region remained down overall at -3.6pc.

The only other region to record overall growth was Tasmania, at 4.8pc.

READ MORE: Pressure on as north adapts to new normal

Farmer confidence in their own businesses rose from 53 to 72pc in the southwest but doubt still lingered about the overall picture with only 42pc confident in the future of the industry.

And, despite the better seasonal conditions and milk prices, which mean 93pc of farmers expect to be profitable, up from 75pc who were profitable last financial year, the region's milk production has not rebounded.

It grew only marginally in February, March and April, leaving the southwest on track for an overall contraction.

The most optimistic region in Australian dairying was Tasmania, with 90pc upbeat about their own businesses and 56pc positive about the future of the industry.

They were also the most profitable, with 85pc making a profit last year and 91pc expecting to this year.

Over the past 12 months, Tasmanian dairy farmers answering the DA survey were the most likely, at 42pc, to expand their businesses.

The state's production is now getting very close to that of NSW, making it Australia's third-largest milk producing state by a large margin over South Australia.

In contrast, Queensland production has fallen by 13.1pc year to date, making it the state contracting fastest.

Only half of all the subtropical dairy farmers surveyed expected to be profitable this financial year, a similar proportion to 2018-19.

The challenges came from almost every direction, including climate, input costs, feed and milk price.

Despite all that, DA recorded a bounce in the region's confidence, with the proportion of farmers confident in the future of their own businesses up from a dismal 27pc to 66pc.

The DA survey revealed that less than half NSW's farms made an operating profit in 2018-19 and only 38pc expected to be profitable in 2019-20, giving NSW Australia's lowest proportion of profitable farms.

Input costs, feed, climate and milk prices all battered the state's dairy farmers last financial year and all of them - with the exception of milk price - were the big challenges this year, too.

With the exception of two months, its production this year has been consistently lower.

Despite that, just 2pc of NSW dairy farmers surveyed said they might exit the industry in the next two years, one of the lowest results across Australia.

The confidence of surveyed South Australian farmers in the future of the industry grew from 24pc to 57pc as it did in their own businesses, from 36-77pc, largely thanks to better milk prices.

Concerns over input costs and feed, which dominated last year, have eased although climate is now the number one issue.

Its production was consistently lower this year, other than in February, March and April, and a significant 8pc of farmers said they may exit the industry.

According to the NDFS, Western Australian dairy farmers are suffering a long crisis of confidence.

"Since 2016, confidence in the industry's future has trended downwards among respondents and this year they are the only region more likely to be negative in the future of their own business than positive (48pc and 45pc)," it said.

"Most likely nationally to expect challenges with input costs (78pc) as well as feed price and availability (73pc) over the next 6 months."

Only 60pc expected to be profitable this year.

WA's milk production was down 3.8pc as at April for the year to date.

"Australia is not immune to the growing headwinds facing global markets," the Situation & Outlook report said, pointing to the impact of the pandemic and unresolved trade disputes.

"Whilst exceeding some earlier expectations, for most farmers current indicated milk prices will represent a decrease compared to the 2019-20 season, which highlights the importance of continued moderation in input costs.

"After a troubled relationship in recent years, Mother Nature may prove a timely ally in the months ahead."