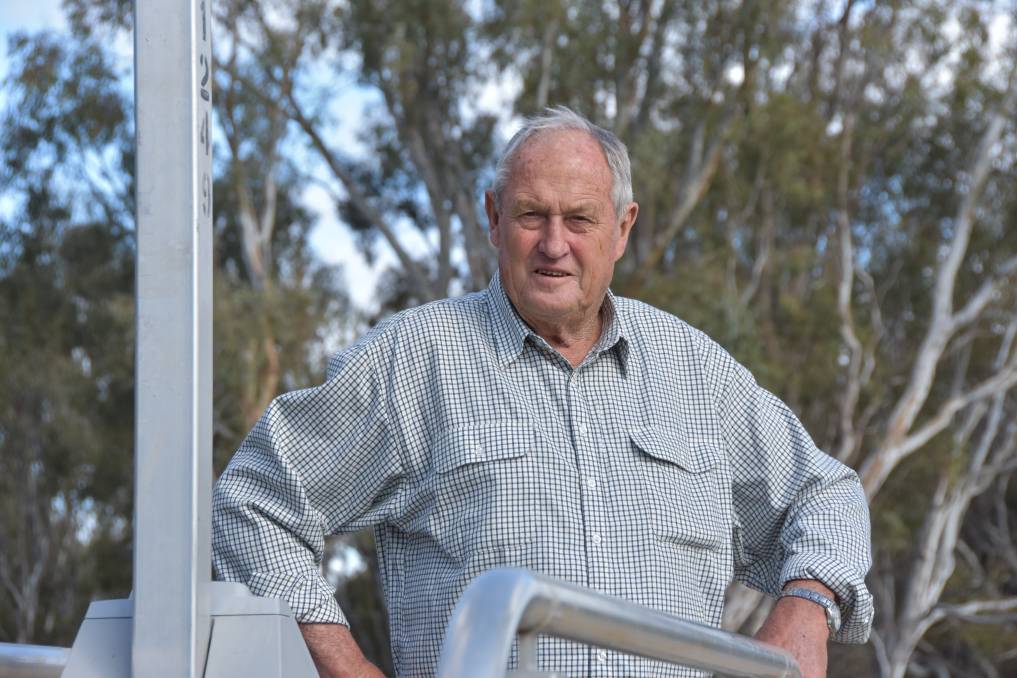 HISTORICAL INFORMATION: Loddon Valley Water Services Committee chair Lawrie Maxted says he's concerned the historical understanding of how the 75 gigalitres of water savings is to be returned to irrigators has been forgotten.

A Loddon Valley irrigators group has called on the independent committee, set up to advise on the distribution of water savings, to reject a proposal to return them as high and reliability water shares.

The Irrigators' Share Consultative Committee (ISCC) has been looking at the best way to return 75 gigalitres of water, recovered under the $2 billion Connections Project.

The project modernised infrastructure in the Goulburn Murray Irrigation District.

The ISCC has sought feedback on its proposal to return a once-off distribution, with saved water issued to those with a delivery share of 0.25 megalitres a day, or higher, and bill credits for those below that threshold.

About 200 submissions were received on the proposal.

But Loddon Valley irrigators, represented by the area's Water Services Committee, have raised concerns the water will be returned as high and low-security entitlements.

In its submission to the ISCC, Loddon Valley called on it "to reject the government's offer of 61GL of HRWS and 28GL of LRWS and request 75GL of HRWS as was originally promised."

The WSC said 61GL of HRWS was 14GL less than what was initially promised by the Victorian government.

Group members have previously pointed out that in 2007, former Premier Steve Bracks wrote to the then Victorian Farmers Federation president Simon Ramsey promising the return of HRWS.

"As the savings are generated through distribution losses, this water will be available, every year the system operates, whether it is at 100 per cent, 75pc, or 40pc," Mr Bracks said in the letter.

He went on to say irrigators shares from Stage One of the project, "and any subsequent water savings will be accrued as additional water entitlement for irrigators in the form of a water share.

"Irrigator's shares of savings will be issued as additional high-reliability water shares, as systems are modernised," Mr Bracks said.

Dissension over how irrigators 75GL saved water should be returned

Loddon Valley WSC deputy chairman Lawrie Maxted said one of his most significant concerns was that historical knowledge about the original deal, was now lost.

"The staff there now are not going to know the full context of what the rules were, in the original plan," Mr Maxted said.

"When (Mr) Bracks put that stuff in place, it was all pretty much cut and dried - but the staff who knew those rules are no longer with GMW."

He said he, and the WSC, firmly believed that the original agreement should be honoured.

"The commitment from the Bracks-Brumby government to the VFF, to allocate 75GL of high-reliablity water shares, was irrefutable," Mr Fenton said.

"It has to be honored by the Water Minister, Lisa Neville, and the current government, if the Food Bowl Initiative (the forerunner of Connections) is to be completed with honour and integrity.

"The VFF stands for nothing, if the 75GL of high-reliability water shares are not allocated to the Food Bowl district."

The submission said that in 2006, 20 per cent of a tradeable, low reliability water entitlement, equating to 120GL, was transferred to the environment as a water recovery measure for the Living Murray project.

To compensate for the loss the government invested $50 million to recover 25GL of high-security water shares - later to be known as HRWS - through asset rationalization, carried out through the Reconfiguration Project.

An agreement between the government and Goulburn-Murray Water specified the 25GL of HSWS was to be transferred by May 2009, irrespective of the actual water savings achieved.

In 2007 the Food Bowl 1 program was introduced and ran alongside the Reconfiguration Program, with the two being merged in November, 2008.

Then GMW managing director David Stewart reported the program was on track, with savings of 12.5GL of water.

He promised an auditor would be appointed to verify the 25GL in water savings from Reconfiguration, once it was completed.

"It is no wonder that GMW and the Department of Sustainability and Environment have never completed an audit of the Reconfiguration Program, because it involved so many other water savings programs."

The submission said despite the failure to carry out an independent audit, in May 2009, 25GL of HSWS was transferred to the government, from the GMID.

That occurred without "proper community consultation, accountability and auditing," the submission said.

"The Bulk Entitlement of the GMID was adjusted by 25 GL, does this mean GMID irrigators' security (has been reduced) as a result of the failed Reconfiguration Project?"

GMID businesses had contributed 120GL of low security water, but had received only $15.1million, out of the $50m project budget.

"This shortfall, if costed at (the amount of water saved by the individual projects), would have a combined value of $52 million."

The WSC submission raised doubts about the efficacy of the management of the water savings programs.

The WSC also raised questions about where what it said was $39.4 million of unspent Reconfiguration funds went.

The committee also asked Water Minister Lisa Neville to conduct a full, independent audit of the Reconfiguration Project, and its relationship to Food Bowl One, and other water savings programs.

"It is only then all irrigators can make an informed decision about what your committee has proposed,' the submission said.

The LTCE is a type of average, taking into account different characteristics and reliability of entitlements across NSW, Victoria and SA, while intending to create a standard unit of measurement.

"If you look into the protocol, the way they work out savings, it's not done on real water, anyway," Mr Hacon said.

"The savings are biased, in that they give the public a false impression they are saving more than they are because it's based on long-term, cap equivalents."

He said it was claimed rationalising Dettheridge wheels would result in savings which were 30 per cent higher than the actual water recovered.

"Once you start dealing in fiction and fantasy, you get yourself into trouble - they may have saved a long-term cap equivalent, but they haven't saved the wet stuff," he said.

He believed the whole process should go back to the start, but that was unlikely to happen.

'They said all three parties (the environment, Melbourne Water and irrigators) would get equivalent shares, but that's not happening, as they are saying it's worked out on the long term cap equivalent.

"It's ended up a mess, that's what happens when you deal in fantasy and fiction."

"The view of the committee was to give the water back, as an entitlement," Mr Andrew said.

"Everyone has rung me has been happy with that outcome."

He said he still didn't understand why the committee could not recommend an ongoing assignment of water allocations, from a generally held entitlement.

The ISCC was told that would be inconsistent with Murray-Darling Basin Trading rules.

"That is the case whether that centrally held entitlement is in the form of a bulk entitlement or a water share and, if the latter, is held by GMW or a separately constituted entity," the committee was advised.

"Consequently, ongoing water allocation-based options are not a viable distribution model for the irrigators share of water recovery. "

Mr Andrew said it was also unlikely irrigators would sell the water they received.

"The concern was that people would sell their water, to pay off delivery shares, but everyone wanted to use it," Mr Andrew said.

"It's an asset that's been given to you, it's capital, there is no debt on it, and you can borrow against it," he said.

He predicted the committee would agree to the proposal that had been put forward.

The ISCC is believed to be holding its next meeting in mid-June, to discuss the submissions.

The state government and VFF have been contacted for comment.