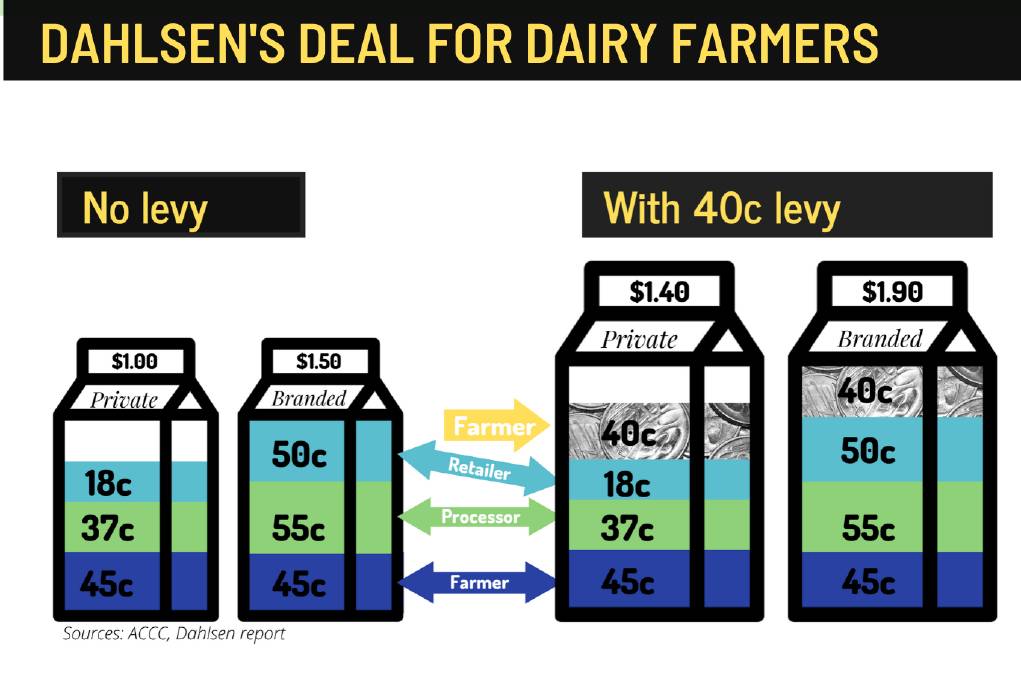 NEW DEAL: Under the Dahlsen plan, 40 cents from every litre of drinking milk sold would be shared among all Australian dairy farmers, irrespective of which processor they supply.

Frustrated with advocacy's slow pace, former Woolworths chairman John Dahlsen is urging grassroots dairy farmers to push for a retail levy on milk that would be shared among them all, irrespective of where their milk ends up.

Dairy farmers could be far better off within weeks if the grassroots can jolt its leadership into action, a former Woolworths chairman says.

John Dahlsen believes a retail levy that would benefit every Australian dairy farmer, irrespective of where their milk ends up, is simple to implement, realistic, and critical to the industry's future.

The idea has been endorsed in principle by the United Dairyfarmers of Victoria (UDV) but, with nine dairy farmers leaving the industry every week last year, Mr Dahlsen said there was no time to wait for a chain of national committees to act.

"Australia's is the cheapest milk in the world by a mile and they are very efficient farmers yet our sector is declining and its export prowess is declining, so what's wrong?" he said.

"The dairy farmers haven't done anything wrong, they're hardworking people.

"But what I've learned is that they're so blindsided, so disillusioned.

"Once, dairy was quite a strong sector; it's just steadily going downhill.

"That isn't because it hasn't been written about - I think this is one of the most reported-on sectors with the most talkfests that I know - but nothing happens."

"That makes me so sad for dairy farmers, because I understand why they're so negative."

READ MORE: A 'lack of will', not resources, hobbling dairy

He is determined his own 107-page report will break the cycle and restore the confidence of dairy farmers.

A 20-cent levy on every litre of milk on supermarket shelves - fresh white all the way through to UHT and flavoured - would return 6.7 cents a litre to each Australian dairy farm.

All the money would be paid to farmers but sharing the proceeds among those whose milk was manufactured into other products, like cheese, explains how 40c/l at the supermarket becomes 13.3c/l at the farm gate.

Mr Dahlsen said his report justified an urgent and significant economic boost for the industry, ensured all the money would flow to farmers rather than processors or supermarkets, and showed an increased milk price was affordable for consumers. 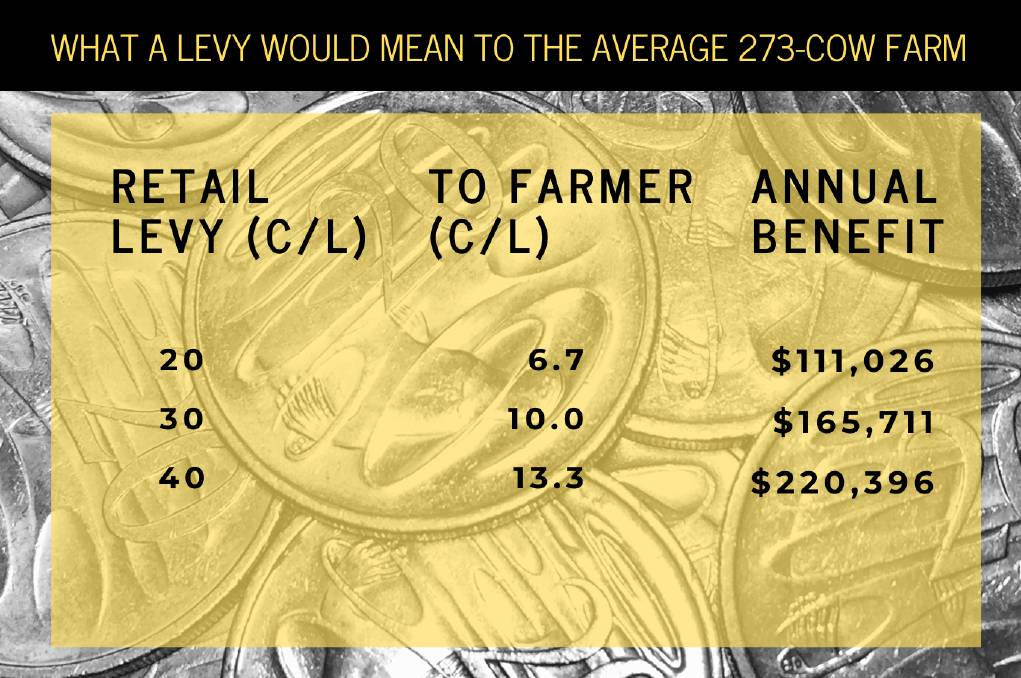 His report concludes milk on Australian supermarket shelves is among the cheapest in the world and a 40c/l rise would bring it closer to the global average of $1.70/l yet still well under the developed world's $2.40/l.

How the plan would work

Put simply, the government would mandate that the price of all drinking milk on supermarket shelves would rise by a certain amount.

While Mr Dahlsen suggested a levy of 40c/l in the first year, it would be annually reviewed by the ACCC, after submissions from industry stakeholders.

Rather than flowing back through supermarkets or processors, all the money raised would be handled by an independent entity.

Every Australian dairy farmer would get a share of the money in line with their milk production for that month, irrespective of the processor they supplied.

Prof Sampson cleared the concept, making three points about the proposal in a letter to Mr Dahlsen shared with Stock & Land.

First, to be classed as subsidies, any price supports had to be funded by governments but, "As you state in your letter, what you are proposing 'does not involve any contribution by Government but simply by the consumer ...'," Prof Sampson wrote.

"On this basis, it would appear that your proposal would not be subject to WTO disciplines on subsidies."

They also had to relate to exports or the use of domestic over imported goods, which did not apply to the Dahlsen proposal.

And third, he added, "If a government considered the proposal to be covered by the agreement, they would have to be prepared to take the case to the WTO Dispute Settlement System and prove injury to their own industry. This would be a tough call."

If it made imports more attractive he warned, any trade restrictions would raise a "new set of questions".

John Dahlsen's interest in the dairy industry was sparked by conversations with relatives, Chris and Peter Nixon, who run a large dairy and beef business out of Orbost.

In what he describes as being in the "twilight" of his career, Mr Dahlsen is a competition economist and lawyer, former chairman of Woolworths and The Herald & Weekly Times, co-founder of Southern Cross Broadcasting, long-time ANZ director, and chairman of hardware company, JC Dahlsen.

"I've had a lot of experience in various areas as a competition economist and a competition lawyer and, where I don't think the public interests have been served, I've gotten involved," he said.

Since November, Mr Dahlsen said he'd spent about a third of his time studying the dairy industry, reading "masses" of reports and ground-truthing his conclusions with the Nixons and other dairy farmers.

"I did my best to get to the bottom of it and I claim to be fairly clinical and fair about it."

Would you like to see the Dahlsen plan implemented? Vote now!