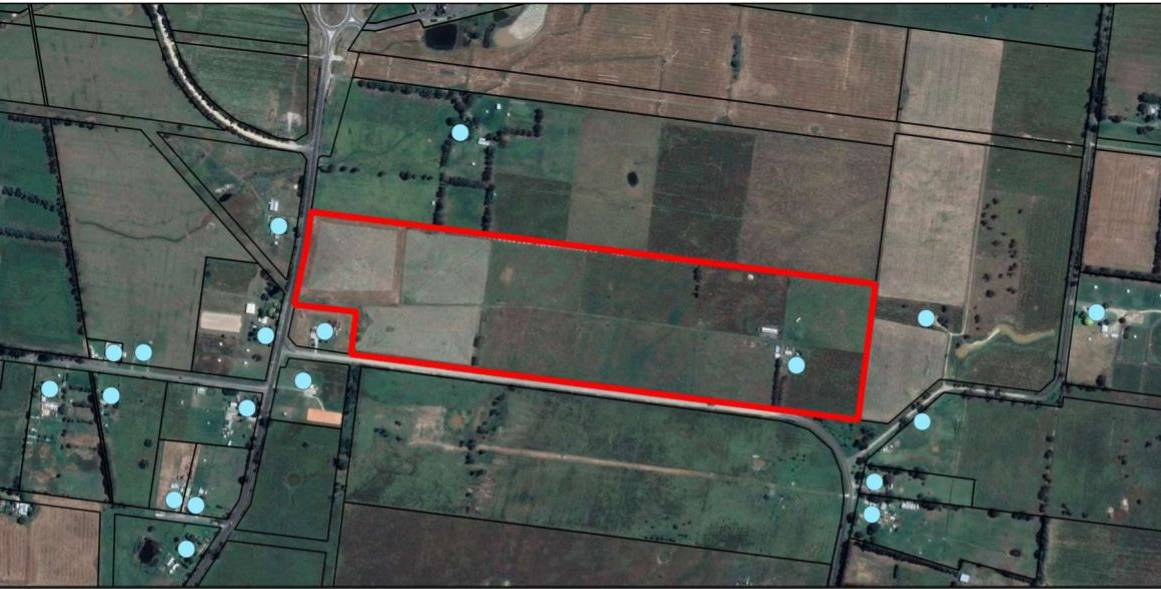 LONGWARRY: The red line shows the area of the Longwarry site and the blue dots are nearby residences.

Longwarry saleyards planning permission is on hold, with Baw Baw Shire council and the EPA waiting for more information.

The land is bought, the designs drawn up and the community consulted but Longwarry saleyards is far from a reality, with Baw Baw Shire Council deciding to postpone a decision on planning approval until September.

The council is working in conjunction with the Environment Protection Authority (EPA), which has "paused the assessment clock" on granting works approval until the syndicate can respond to objections and complete an independent human health risk assessment.

The development is not without opposition; 11 homes sit less than 500 metres from the "activity zone" of the saleyard and EPA received over 85 individual submissions and one petition.

Residents - most of them smallholders with horses, greyhounds, chickens, goats and alpacas - have formed the 'No Saleyard for Longwarry' group.

Pam Hall whose 2.5-hectare property is directly across the road from the site, has become the unofficial spokesperson.

She says they're not anti-farming.

"I understand and completely support that the farmers need a saleyard but this is just not the right place for it," Ms Hall said.

The group has clear concerns and clear demands that mostly revolve around drainage, noise, smell, dust and disease.

At the centre of it all are Ben and Melissa McCoy, whose property would be enclosed on two sides by the development's 3.8-metre-high noise abatement walls.

The McCoy family moved in almost three years ago, unaware of the saleyard proposal until a Longwarry Saleyards Pty Ltd representative knocked on the door.

They thought little of it, Ms McCoy said, until plans were developed and the saleyards syndicate approached the family asking to purchase the property.

The McCoys had asked for $2.8 million with a 30-day settlement but Longwarry Saleyards was prepared to offer $1.1 million conditional on planning approval.

"They wanted to purchase our property for less than market value and with a whole heap of conditions," she said.

Among the submissions the McCoys have made to the EPA about the Longwarry saleyard proposal is a report prepared by KLM Spatial, the same consultancy company that drafted Victorian Livestock Exchange's (VLE) submission. Ms McCoy said VLE had "fully paid for" the KLM Spatial submission on their behalf.

VLE, which runs saleyards in Warragul, Pakenham and Leongatha, plans to build a new facility five minutes from Longwarry.

VLE managing director Wayne Osborne said he had funded the KLM Spatial report for VLE but allowed the McCoys to leverage the work.

"We're not objecting to competition but when we built Pakenham we had to abide by various planning requirements... so all we're saying is, if there's going to be competition, that's fine, but everyone has to play by the same rules," Mr Osborne said.

MORE TO COME: The issues Longwarry must address.