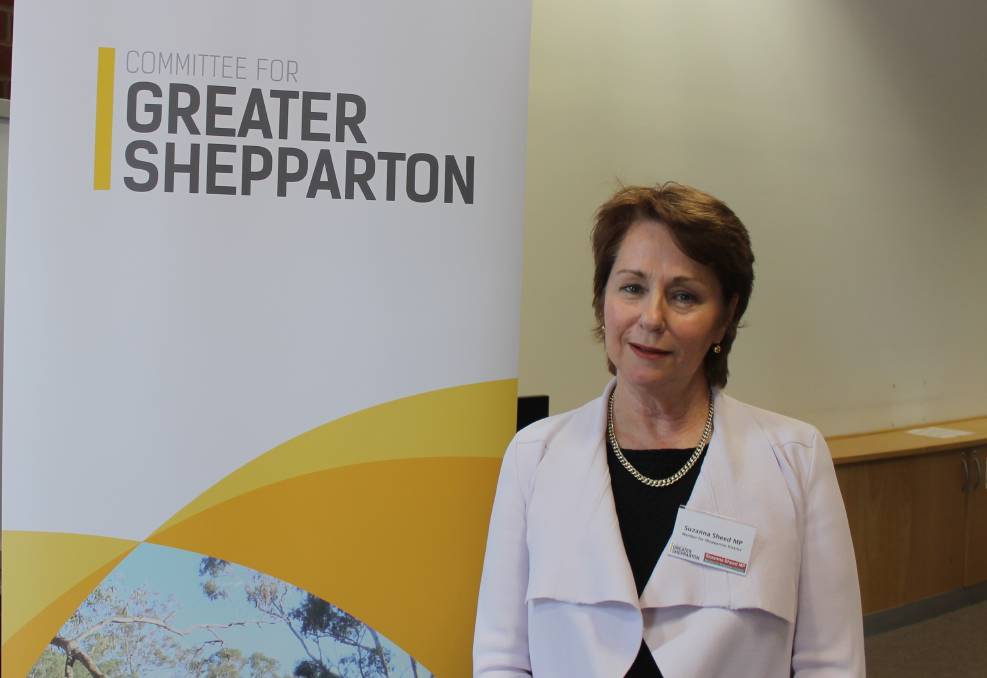 PROJECTS AND INSULT: Shepparton Independent MP Suzanna Sheed says the projects are an insult to everyone who worked to put a robust socio-economic test in place.

The Victorian Farmers Federation (VFF) says federal authorities should stop acquiring water to meet demands, over and above what's required under the Murray-Darling Basin Plan.

Mr Anderson said the VFF had long argued for the proposed recovery of an additional 450GL environmental upwater should be scrapped.

"It makes no sense for the Government to be pursuing this water," Mr Anderson said.

"The VFF successfully lobbied for a strengthened socio-economic test to assess projects under the 450GL back in December 2018, where politicians committed to firstly pursuing off-farm water-saving projects.

"It seems the federal department is determined to ignore the criteria and advice from politicians at the time."

"It's crazy to be pursuing the 450GL when we don't even know if the water can be delivered to South Australia," Mr Anderson said.

"Basin States are currently working on reports looking into deliverability.

"The federal department should be waiting on this information before targeting water that simply cannot get down the Murray River".

The two latest projects released for public comment are in South Australia, with five of the six projects located in that state.

One project proposes to install netting structures over 33 hectares of citrus and claiming 5megalitres per hectare of water savings.

Mr Anderson said practical experience in the Sunraysia suggests that a more realistic saving is 0.5ML per hectare.

The other project is converting a field nursery into a vineyard.

Mr Anderson said it was very surprising the commonwealth was prepared to subsidise farmers' commercial decisions to change from one farming enterprise to a completely different enterprise.

He said In total, the six on-farm projects would result in 480.3ML less water available to agriculture.

The proposals lack transparency, total project costs were not provided, nor was the Government funding contribution.

"Changes need to be made," Mr Anderson said

"We cannot continue to pursue the 450GL, and these projects should not be supported."

"The fact these proposals got as far as public exhibition shows the Commonwealth has abandoned any pretence of due process," Mr McKenzie said.

"The Commonwealth hasn't even bothered responding to substantive concerns raised in submissions on earlier projects.

"Their contempt for Basin communities is all too clear."

Two were displayed for comment without alerting interested parties, so deadlines were missed. All three failed to address the socioeconomic criteria comprehensively, as required.

Shepparton Independent MP Suzanna Sheed said the projects were an insult to everyone who worked so hard to put a robust socio-economic test in place.

"So now they want to pay a vineyard for its commercial decision to rip out one grape varietal and replant with another? ,' Ms Sheed said

"Pay an orchard for the commercial decision to net its trees?

" Pay a nursery to turn itself into a vineyard?

"All without evidence the claimed water savings are real."

She said it was hard to believe the schemes would pass muster with the Australian National Audit Office.

"It certainly does not pass the public interest test of value for taxpayers money,' Ms Sheed said.

"It is just extraordinary the Commonwealth continues to try to squeeze more water out of irrigators regardless of the socioeconomic impacts."

The last three projects follow the same pattern as the previous four: worryingly light on detail and in defiance of the Basin ministers' commitment to prioritise off-farm projects.

Mr McKenzie said although the volumes of water involved in these projects were small, the breaking of the agreed neutrality principles sets an ominous precedent for larger projects that may come forward in the future.

Ms Sheed questioned whether or not the Basin Ministerial Council would intervene to say 'no more' due to the cumulative impacts.

"The Ministerial Council agreed to put socio-economic criteria in place and those are now in effect," Mr Pitt said.

"States need to consider if a project has acceptable socio-economic outcomes before it is put to the Australian Government for funding consideration and there was not agreement that there would be no further on-farm water recovery projects as VFF claims," he said.

The new proposals had not been approved by either the Commonwealth or South Australian Governments.

"Consistent with the agreed process public comment is being sought on them," he said.

"No actual state-led projects have commenced so far however there are a number of feasibility studies being funded by the commonwealth for NSW, ACT and South Australia," Mr Pitt said.

There were also negotiations underway with Victoria on two projects.