The Bundara Downs three-breed ewe sale achieved an average of $857 across the catalogue of 251 lots sold. 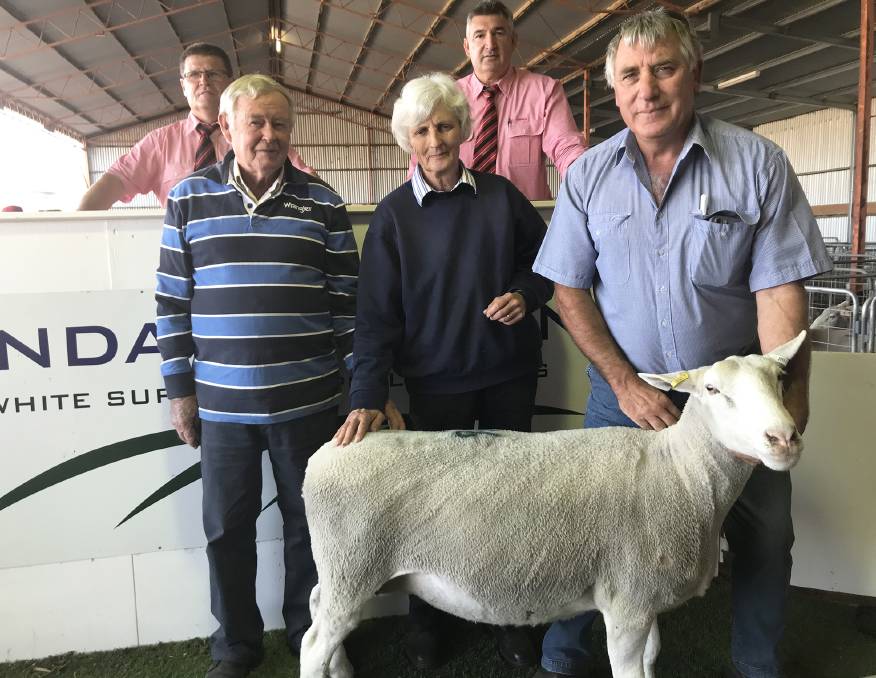 Bundara Downs's sale result of 251 of 261 ewes offered selling to $2200 and averaging $857, across three breeds, was a rewarding result for the dogged determination of the vendors.

Steve, Ros, Greg and Selena Funke overcame severe logistical challenges to hold the sale with increased input and promotion of on-line sale capabilities, and assistance from staff of sale agents Elders and AuctionsPlus.

To have achieved a 96 per cent clearance with less than 10 buyers in the sale complex, was beyond any pre-sale expectations.

For the Elders stud stock auctioneers, Tony Wetherall and Laryn Gogel, it was a unique three hour experience, offering 261 sheep in single lots, primarily communicating with bidders they could not see or hear.

"With only a very small buying gallery in attendance, we were optimistic that buyers would be operating through Auctions Plus, but until the sale started we were dealing with the unknown," Tony Wetherall said.

"The result was outstanding, with just eight bidders at the sale, but a huge number online kept it going at a fast pace with us having to have a constant eye on the video screen and just a glance or two at the gallery.

"It was certainly an unusual sale to have 90% of the action on the screen, but with the COVID-19 restrictions, it is one we may well have to get used to," Mr Wetherall said.

At the completion of the sale, all three breeds produced very good results. Because of their greater numbers in making up 61pc of the overall offering, the White Suffolk draft was the only one not to see a complete clearance. The breed contributed 62% of the sale gross. 149 of the 159 White Suffolk lots sold to the overall sale top price of $2200 and averaged $897.

A draft of Suffolks was offered for the first time in this sale, with 32 sold under strong demand, topping at $1800 and averaging $1009.

The sale started with pregnancy-tested-in-lamb (PTIL) White Suffolk ewes, and typically the bidders were initially hesitant while the sale level was found. The first 10 lots, containing what the stud principals considered to be top 2019-drop ewes averaged just $770, 14% below the average for the entire draft.

Brett Picker, Bigga, NSW, operating via Auctions Plus grabbed the first lot at $800 and and buoght five ewes at an average of $820.

From there bidding became stronger with the ewes that attracted more competition regularly exceeding $1000.

Top price of the sale was $2200 paid for lot 96 bought by long-time Suffolk and White Suffolk breeders Bob and Karen Cameron, Kingston, SA, who were present at the sale facility. The lot was Bundara Downs 9867 twin, a 2017 drop daughter of high performance sire Bundara Downs 2261, and scanned in lamb with triplets by Ashmore 80.The Camerons were selective and picked up three White Suffolks and one Suffolk at a $1475 average.

David Pipkorn, Detpa Grove stud, Jeparit, was the only other purchaser to go to $2000 when he successfully bid that for BD 9868 twin, another 2017-drop ewe by BD 2261. Like the sale topper, she was scanned in lamb with triplets, this time to Ella Matta 180100. Mr Pipkorn purchased four select ewes at an $1175 average..

The biggest volume buyers in the White Suffolk draft were Ian and Kathy Ross, Edenhope, who made the most of the opportunity presented to start a new White Suffolk stud with high quality and in-lamb ewes. They purchased 28 ewes, paying to $1100 and averaging $743.

The Poll Dorset draft of 70 ewes was dominated by one buyer; Craig Wilson Livestock, Wagga Wagga, NSW. He purchased 56 of this draft, paying to the top of $1400 and averaging $695. His purchases included a further 38 lots at the $600 base price.

Nicholas Say, Glen Innes, NSW, was the most prominent of the other four buyers in this draft, selecting six ewes to $800 and averaging $700.

The stud's inaugural offering of Suffolks met strong competition with 10 bidders successful, purchasing from one to thirteen ewes. That saw the Suffolks achieve the highest average of the day at $1009.

In summing up the result, Tony Wetherall said it was a great day for Bundara Downs, Elders as agents, and the industry as a whole in being able to achieve such great success.

"Bundara again presented all three breeds in ideal sale condition for PTIL ewes. The depth of quality was extremely good, both visually, where they exhibited all the renowned qualities of the breeds, and also for performance levels, with the EBVs being second to none. It was quite a spectacle to see the entire offering all penned up," he said.

"The length and depth of effort the Funke family went to, to visually display these qualities through videos and photos for interested clients wishing to compete online through Auctions Plus was exceptional and a great example of their professionalism and dedication, ensuring their product was properly marketed."

"It's not often you can have such a successful sale with such a small gallery," he said.

"I wouldn't recommend it as it was quite stressful, but it proves the technology can come through to fruition.

"Considering all the Covid-19 restrictions, without Auctions Plus we certainly would have seen a vastly different result, so thank you to them. Likewise, thank you to Elders for their efforts; it's nice to have a corporate company with which you can have a meaningful and productive partnership.

"It is extraordinary times, but in general we were very pleased with how well the ewes came up under the restrictive conditions. To have been so well supported is extremely pleasing, so on behalf of the family, thank you to everyone online and here for your support; it has made all the work and stress worthwhile," he said.