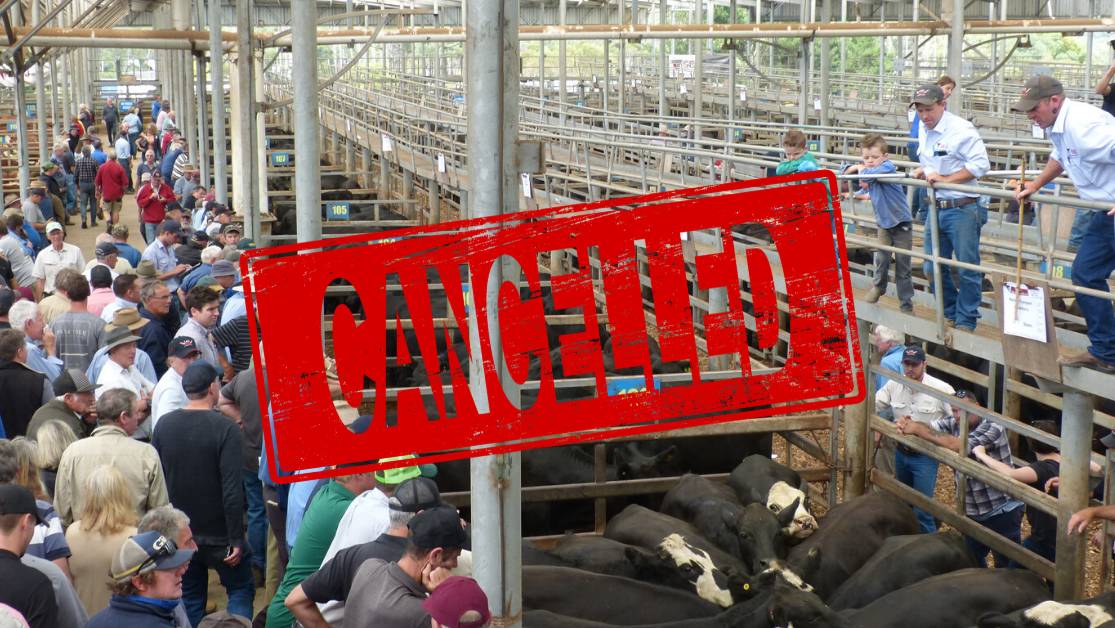 CANCELLED: Friday's Leongatha store sale has been cancelled due to COVID-19.

Several cattle sales have been cancelled due to the coronavirus.

Friday's 4000-head cattle sale at Leongatha was cancelled on Wednesday as Ballarat's 3000-head female sale was postponed and is expected to be rescheduled within weeks.

It followed the cancellation of monthly store sales scheduled at Warrnambool on Friday and Echuca on Monday.

"With the situation and the way it is at the moment with the regulations the government brought out [on Tuesday] night, we thought it would be hard to police," Mr Ould said.

"I don't think it would be fair to vendors if the sale went ahead without a full field of buyers there."

Big updates coming through for Victorian store sales: #Leongatha and #Ballarat off, #Warrnambool's monthly sale on Friday (3000 cattle) also off. Monday's #Echuca sale cancelled. #SwanHill's prime sale - along with most fat sales - to go ahead. #agchatoz@journoandy26

Despite the cancellation, Bairnsdale's fortnightly store sale was expected to continue, at the time of publication, with agents drawing for 1200 cattle.

"No one has ever encountered something like this before and we have to do something in Australia to take coronavirus seriously and if this is what we have to do, so be it," Mr Ould said.

He said the postponed Friday store sale featured female cattle with a large component of cows and calves.

"We had several buyers state that they wouldn't attend the store sales ... we hoped people would understand but it needs to be enforced so buyers and agents feel safe."

He said last week's livestock markets experienced a "correction", coming off a high price for lamb and cattle.

"That correction will be short-lived and things will level out," he said.

"The worst thing that people can do is panic and put a heap of stock over the hooks and flood the market. We have got to work together and get this new system 100pc right."

Warrnambool Stock Agents' Association president Anthony Mahoney said the decision to cancel was based on the advice regarding social distancing and travel.

He said the centre would continue to run its weekly prime sales after Wednesday's sale where buyers reported a smooth market.

The VLE runs saleyards at Pakenham, Leongatha and Warragul.

Mr Osborne would not speculate on how long the markets would be closed and said he hoped other markets could be kept operating.

"Prime sales will continue but it is strictly meat companies only, stock agents, transporters and saleyards staff," he said.

"We've got a vehicle checkpoint set up out the front of the saleyards. Meat companies have to pre-register with us and we tick them off as they come through.

It follows the cancellation of the Thursday, April 2, store sale at Pakenham.

"Closing the Pakenham store sale wasn't an easy decision but once the Koonwarra and Ballarat agents called theirs of, it made it more problematic for us to go forward," Mr Bennetts said.

"We are looking at implementing some procedures we will put into place at the Monday prime sales that might allow us to be able to get the store sale up again sooner."

"I think they will get their act together," Mr Tuohey said on Wednesday afternoon.

"Store sales are a big part of the marketing of livestock, so I am pretty sure they will get them back up and running.

"I spend two or three days every week at a store sale - I have backgrounders, agents, feedlots and cockies, as clients."

As vendors seek an alternative, online platform AuctionsPlus said it had been inundated with enquiries and bookings in recent weeks due to the coronavirus restrictions.

"They throw up another lot of challenges, in relation to managing the saleyard," Cr McLean said.

"It's a pragmatic decision. It's a different sale to a normal prime market where there are less people in the yards," he said.

"It's pretty hard for vendors not to be in the yards, for those particular sales."

"It's like shutting the state borders, it's a joke," Mr Vallance said.

He said he'd sent cattle to Swan Hill's Thursday prime sale and hoped that the sale would proceed.

"The government will have to foot the bill if I have to freight them home and incur a loss," he said.

"They have to give people adequate warning," he said.

"We are having a prime cattle sale tomorrow, and we will continue to hold sales, until we're told we can't," Ms Herman said.

"We're advising there is no public entry, essential personnel only, agents, buyers, transporters and staff.

"Everybody needs to abide by social distancing."