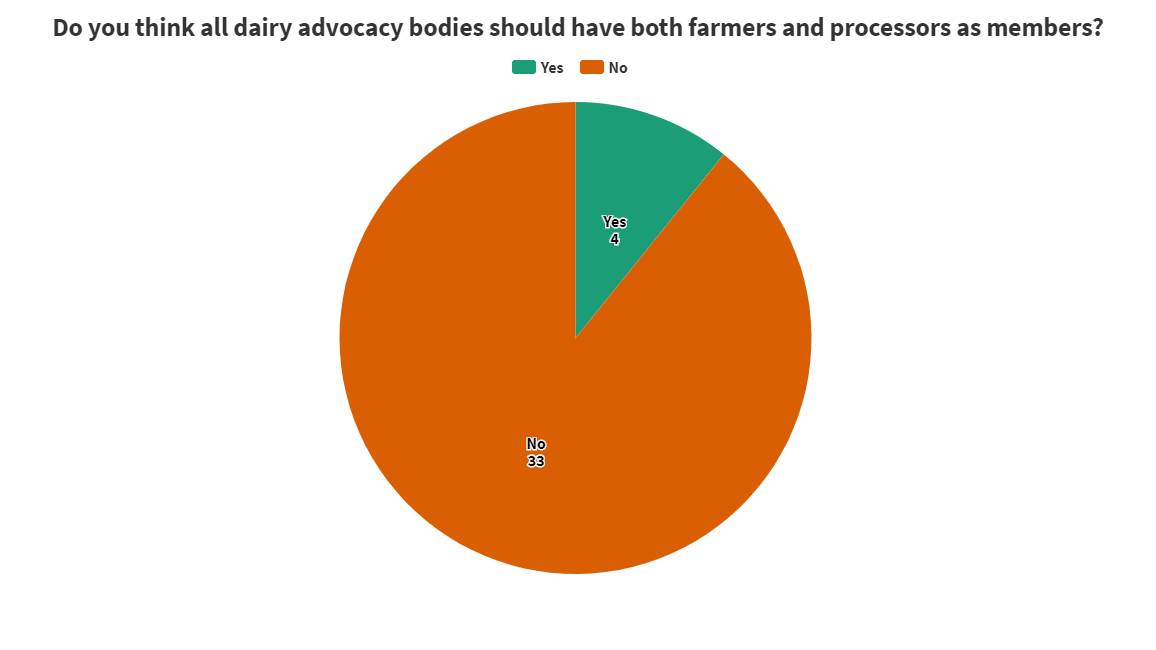 In a historic meeting of former bitter rivals, south-west Victorian UDV branches and Farmer Power have demanded what they describe as 'farmer sovereignty' under any new advocacy body.

In a historic meeting of former bitter rivals, farmers have demanded what they describe as 'farmer sovereignty' under any new advocacy body.

At Camperdown on Monday night, the United Dairyfarmers of Victoria (UDV) Corangamite branch hosted its Wannon counterpart and Farmer Power to rally against the Australian Dairy Plan (ADP).

"It was unprecedented and beyond our expectations," Mr Morris said.

"The desire to engage and incorporate different perspectives from Farmer Power and Wannon branch made for very strong discussions.

"It was a really good meeting with a lot of passion with considered discussion and dialogue."

At the meeting, the Corangamite branch passed several resolutions, which were passed unanimously.

While visitors were not eligible to vote, Farmer Power chief executive Garry Kerr said they were formally asked whether there were any dissenting voices and all signalled full agreement.

The resolutions won't be released publicly until they are ratified in a few days but farmers at the meeting said they centred around concerns about the ADP.

Top of the list was a demand for farmers to have full control over their advocacy.

"They were all aimed at securing farmer sovereignty of the dairy institutions and control going into the future around industry structure and advocacy arrangements," Mr Morris confirmed.

"Actually, I think I can say both the Australian Dairy Farmers (ADF) president, Terry Richardson, and the CEO, David Inall, were in attendance and I can honestly say they saw firsthand the universal passion that the farmers want and demand nothing less than a farmer-sovereign organisation moving forward without the processors involved."

Mr Richardson said he had been keen to answer questions and collect feedback from farmers at the meeting.

"There were a range of views expressed from wanting the plan rewritten to, 'Do we need it at all?'," Mr Richardson said.

A vote on the advocacy proposal released by the Joint Transition Team (JTT) as part of the ADP is slated for mid-year.

So far, the only details a spokesperson could confirm is that 'dairy businesses' would be able to vote.

"Among the common touch points were, once a proposal was put forward, is how the voting process is going to work because if it's not one farm, one dairy licence, one vote, and is more along the lines of the Dairy Australia system, the smaller farms are going to have virtually no say in it," Mr Dwyer said.

He said farmers at the meeting were also concerned by the possibility of processors being eligible to vote.

"Pre-JTT, it was all about 'grassroots dairy farmers', but once the JTT came out, it's been called 'dairy businesses'."

The ADP spokesperson would not elaborate on what was meant by 'dairy businesses' and Mr Richardson said it was likely processors would be involved.

"What we've said is there will be a fight but we haven't landed on the final details of it," Mr Richardson said.

"We will work through the process and we're not the only party in this - we might be given direction on how the vote should take place.

"Whether processors will get a vote is a question that will have to be considered.

"I think that the chair, John Brumby's made reference to 'dairy businesses', so I would assume that that's what he's referring to."

The demand for 'farmer sovereignty' comes after claims the calls for unity during the ADP workshops was misconstrued.

In a Stock & Land online poll, 89 per cent of readers who said they were farmers voted for a farmer-only advocacy body.