Agents yarded about 2000 cattle for the fortnightly Leongatha store sale. 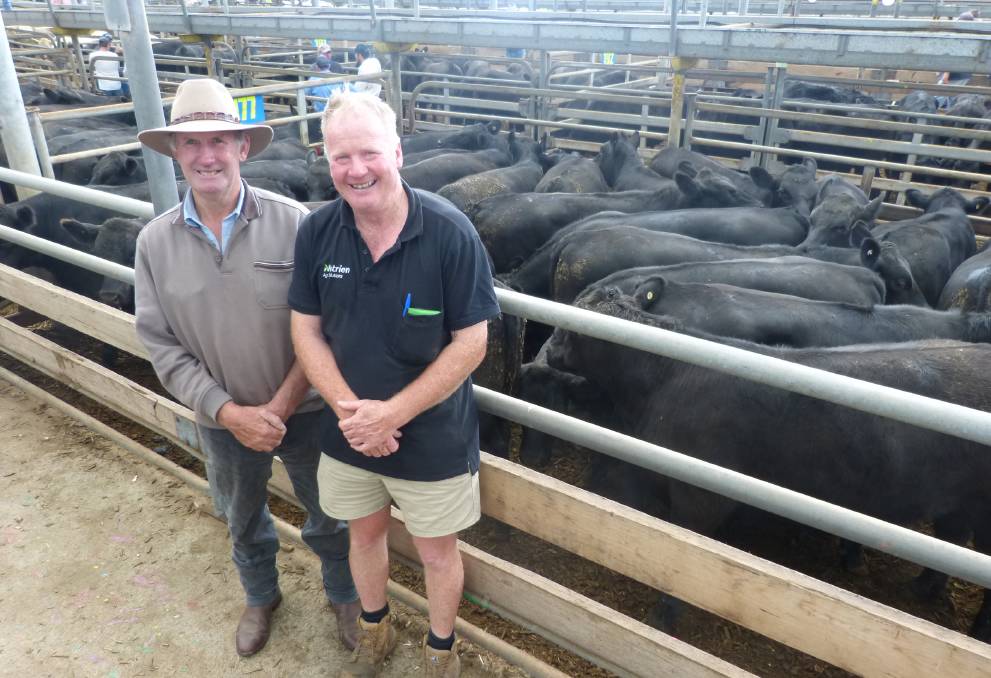 South Gippsland cattle prices continued a month-long trend at Leongatha on Thursday when prices pushed beyond $4 a kilogram as demand for heavy cattle beefed up.

Competition was bolstered by additional feedlotters operating at the Victorian Livestock Exchange where agents penned about 2000 cattle for the fortnightly store sale, up from the 1200 head advertised last week.

Landmark Leongatha livestock manager Brian McCormack sold several pens which passed the $4 a kilogram mark, including a top pen of Brookville Angus eight-to-10-month-old Angus steers, 300kg, which made $1370 or 456c/kg.

"Steers started at 350 cents and they rose as they got lighter and any quality heifers started at $3 or more," Mr McCormack said.

"Steers sold above expectations even though we did expect it to be dearer than what it was a fortnight ago, it was much, much better than what I thought it would be off the back of a rise in the fat market on Wednesday.

"We had a big run of cattle out of the Kuch family and their steers are impeccably bred and sold to $1900 and weighed 540-550 kilos so there was plenty of demand for well-bred cattle."

Feedlot-weight cattle took a 30-40 cent rise, agents estimated, on the previous sale a fortnight ago as prices for female cattle jumped by a similar margin.

"We sold some Clarke heifers from Mirboo for $3.40 and equivalent at Pakenham made 315-320 cents a kilo so you could say those heifers have jumped 20 cents on last week," Mr Ould said.

Feedlots filling orders for cattle bound for Deniliquin, NSW, Ravensworth and central Victoria helped put a floor in the market, edging local graziers out of some sales.

"Those [feedlots] aren't traditionally here either but the cattle were here and I think that really underpinned the sale," Mr Ould said.

"We had plenty of heavy steers making 360 cents a kilo plus and the lighter steers were making a bit more and heifers also stepped up because people are seeing the value in future breeders and the good quality cattle here certainly received a premium."

Elders Leongatha branch manager Rohan McRae described the sale as the "perfect storm" with a plethora of feedlots and restockers keen to get their hands on cattle.

"It was a very strong sale and probably one of the biggest rises in such a short space of time I've seen in my time in the industry," Mr McRae said.

"All classes of cattle picked up and it didn't matter whether it was a heavy Angus steer or Friesian steer, they were all dearer and there was really deep competition to buy those ranges of cattle.

Heifers also held their value throughout the sale, jumping up 20-30 cents on a fortnight ago.

"Heifers were back well over $3 a kilo and it wasn't that long ago they were selling for 260-270 cents or worse so it's really jumped right across the board," Mr McRae said.