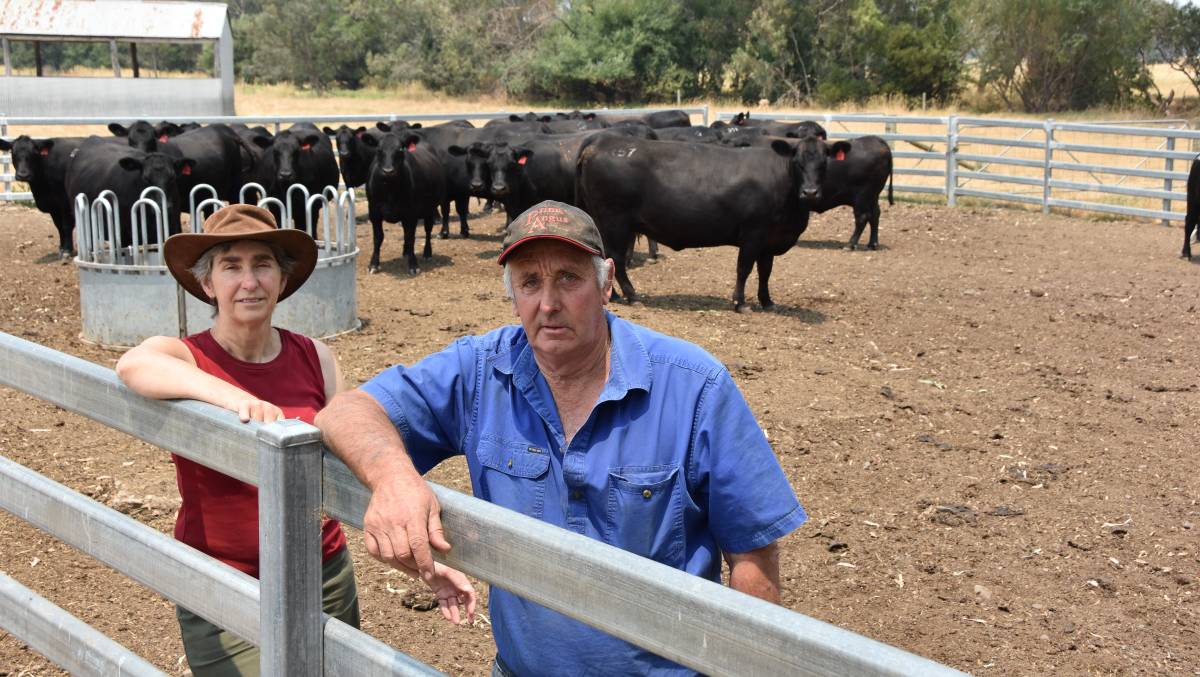 South Australian breeders Pat Ebert and Colin Flanagan have purchased Prime Angus stud and Glenwellyn at Warrenbayne, from the Butterfield family in November.

Last year was supposed to mark the end of a stud breeding era for Colin Flanagan and Pat Ebert.

Selling their South Australian-based stud and property, Granite Ridge Angus stud at Avenue Range, last year was supposed to mark the end of a stud breeding era for Colin Flanagan and Pat Ebert.

But encouragement from some of their biggest supporters, in particular, Allan and Coralee Gillogly, Montrose feedlot, Moree, NSW, and Michael Glasser of GTSM, urged them to stay in the game.

A six-month search across NSW and Victoria lured them into buying 174-hectare property, Glenwellyn, at Warrenbayne, from Peter and Annick Butterfield, in November.

Included in the acquisition was the family's stud, Prime Angus, and 94 stud cows, 46 maiden heifers, and 36 yearling bulls.

The breeding reputation of Prime Angus is well-known, with the stud holding the Australian record price for a yearling Angus bull for several years in Juggernaut J15, who sired over 1100 progeny.

The duo's expansion plans are already underway with the buy-up of 25 Ardrossan Angus cows and bull calves at foot, as well the purchase of a nearby 100-hectare block at Boho.

"Originally, we wanted to scale down, and we had plans to go commercial, but then this came up," Mr Flanagan said.

"None of the kids were interested in Granite Ridge Angus, and after our worker left, that was the big crunch for us to sell."

Granite Ridge will continue to operate with the property buyer, also securing the stud cattle and prefix for an undisclosed price.

While some major changes are shifting from a 500-head breeding herd to an anticipated 160-head, as well as a rainfall difference of 600-millimetre average at Kingston to 900mm at Warrenbayne, the breeding focus will remain the same.

"We go for easy births, weight for age, they must grow to 600-day weights and be able to finish with good carcase and fat cover that is not extreme," he said.

"We breed the cattle to be able to hit every market.

"Everyone in the chain has to be able to make money to survive.

"If progeny are bought for 100 or 150-day weights and don't meet that market, they go into the next program which costs buyers money.

"NLIS (National Livestock Identification System) tags mean your stock are traceable until they are slaughtered, so you need to stand by your tag the whole way." 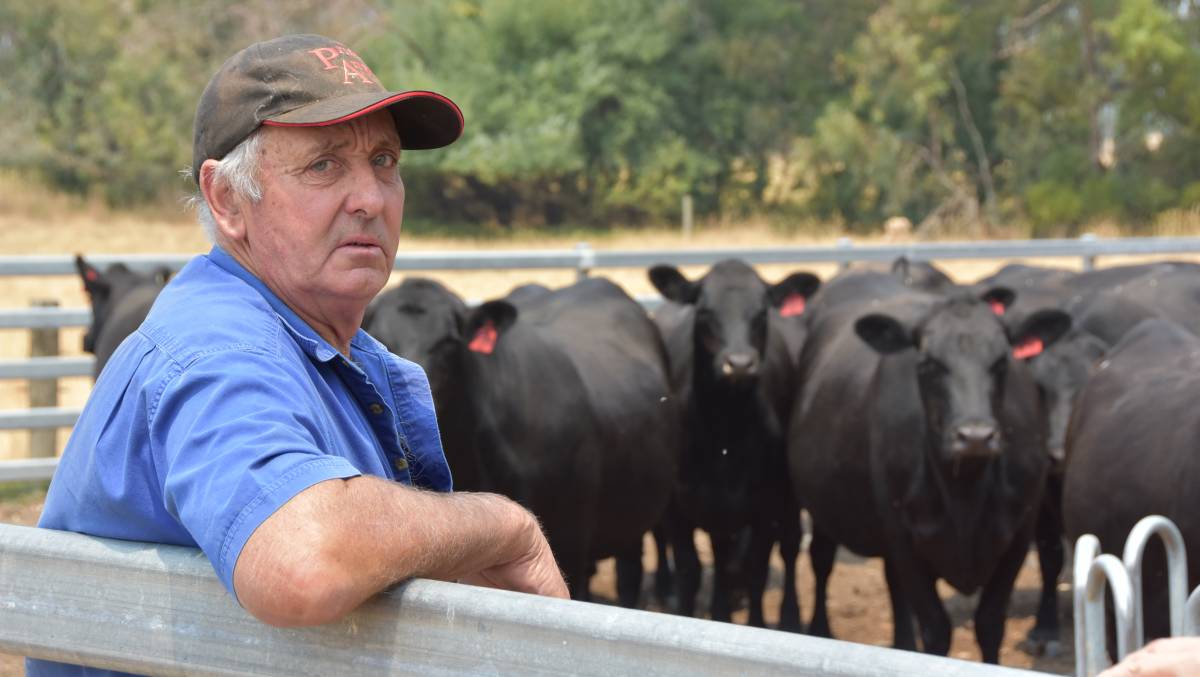 A close relationship with feedlots means Colin Flanagan knows how his cattle perform over the hooks.

He said as feedback direct from abattoirs to producers increases, scrutiny of cattle's genetic performance would increase.

But the breeders know how their stock performs after establishing a client buy-back program, purchasing Granite Ridge-sired steers for backgrounding before they were on-sold to Montrose feedlot.

This means they received direct performance data from the end of the supply chain.

Montrose is a 4000-head feedlot, as well as a 2300-head Angus herd, and last year purchased more than 400 Granite Ridge-blood steers thanks to a partnership with the duo.

"That is the secret, seeing your cattle over the hooks," he said.

"Backgrounding your own stud's progeny gives you a breeding focus.

"We have a vision of what we're breeding for, and we don't sway off it.

"We will go back into buying steers once we get going here, purchasing 500-600-kilogram steers for backgrounding so we can monitor how our cattle perform."

They conduct a fixed-timing artificial insemination program in May, where every bull's linage was verified before being individually selected for each cow.

Heifers were impregnated once they were more than 420kg and backed-up with the stud's top bulls 14 days after insemination.

"We will carry on that program here so that we calve down in mid-February," Mr Flanagan said.

Further changes will see Prime Angus bulls offered for sale in both spring and autumn from 2021 and be sold at 18 months-old, instead of 12 months-old.

"Once bulls get to 13-15 months-old, their entire structure changes, and we can see how they're going to perform for their life," Mr Flanagan said.

"Young bulls can have nearly perfect score structurally, but it isn't until they're carrying weight and their legs have fully developed that we can see how their correct phenotype is.

"We're very strict on what we do and it is to be done right and properly.

"I am paranoid about structure and feet.

"We run them on grass to see their natural growth at an early age.

"Six weeks before the sale, we will finish them on pellets for presentation."

Mr Flanagan said they were attracted to the Victoria's north-east due to its reliable water and extended growing season, as well as the performance of cattle they've purchased from the region.

These 11 month-old bulls will be offered for sale at Prime Angus' March auction, before the stud shifts to a split autumn and spring program.

The timing of their move across the border is opportune following the dispersal of former north-east-based studs Witherswood and Anvil Angus in 2018.

"We've taken two B-double trucks of cattle from this area, so we saw an excellent opportunity to start here," he said.

"We'll crank it all up now.

"Once our first joining is through, there will be a few of the stud blokes watching as our breeding comes in.

"We guarantee that we can add 50kg to our clients' weaner weights and we show how genetics can influence the performance of your cow herd and calf weights big time."

Mr Flanagan will open the gates of Prime Angus for Stock & Land Beef Week on January 30.

"We want to find our feet and feel our way with clients," he said.

"We can ask what our clients are currently wanting, and we can share what we're breeding.

"You've got to be able to prove what you're doing, and then back it up year after year."