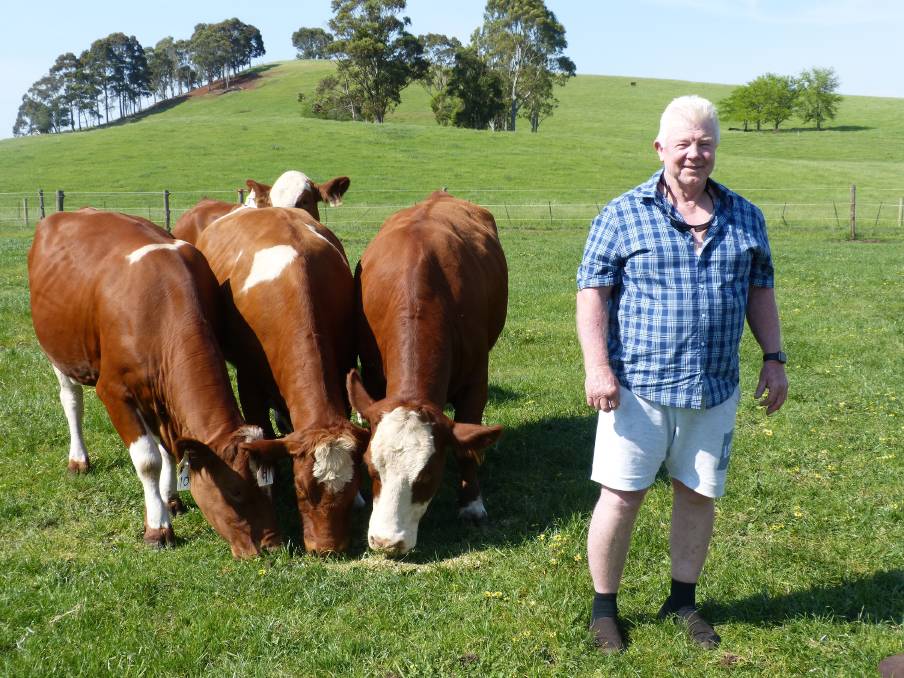 The brother of a top-priced $40,000 Simmental bull will be on show during Beef Week in February at Mt Ararat Simmentals near Nar Nar Goon.

The full embryo brother of the top-priced $40,000 Simmental bull sold at Dubbo in June will be on show in February during Stock and Land's Beef Week.

Mt Ararat Pioneer, the brother of Mt Ararat Phoenix - which fetched the top price at the third annual Simmental National Show and Sale in Dubbo - is expected to attract interested buyers from across the state when the stud opens its gates next month.

The operation is one of 13 studs taking part in day four of Beef Week on February 1, featuring South and West Gippsland breeders.

Located an hour south-east of Melbourne, the Nar Nar Goon stud made headlines in June after selling the top-priced $40,000 bull.

"It was like winning a grand final to me more so because it's my life, not a game," Mt Ararat stud principal John Leek said.

"It makes you very popular with people who are after a bull because they're after quality and everybody is after the best quality they can get because we're trying to breed an animal that is superior to all others."

Raised on a dairy farm at Yannathan, Mr Leek developed a passion for cross-breeding animals and took a particular liking to Simmentals at a young age due to their popularity and good temperament.

"I used to crossbreed them with Angus which is very popular for the beef market and that's what I mainly stuck to but other breeders up north are crossing them with Brahmans and that has become hugely successful up there," Mr Leek said.

"Studs are now taking bulls up Rockhampton way, taking the Simmentals to the doors of the Brahman breeders, and that's because they're genetically been made to perform."

Mr Leek said Simmentals were renowned for their milking ability and consistent meat composition, making them an "all-round" breed.

"The other one that is very important is temperament and they're probably the three main ingredients to a Simmental because they're very docile," Mr Leek said.

"Their fat cover is really great these days because of how they've been bred. They're really just ahead of the breeds as far as crossbreeding for the hybrid vigor goes."

Mt Ararat sells between 20-25 bulls annually to a mainly Angus-dominated clientele with a handful of Hereford studs and local farmers keen to crossbred often in the mix of buyers.

"We have about 80 breeding females now and 20 bulls and some of those bulls vary in different ages but the ones we're going to have up for sale at Beef Week are going to be at the 18-19 months of age," Mr Leek said.

"They're lovely young bulls out of leading sires and the females are as good as you can get."

The stud has also invested on sourcing international genetics from Buzzard Hallow Ranch in Texas via Woonallee Simmentals, SA.

"We've used King Of The Jungle over our good females and that has produced us some fantastic animals," Mr Leek said.

He said Mt Ararat had been "very successful" during previous Beef Weeks selling between six and a dozen bulls in a week on average.

"It's dropped off in the last couple of years a bit because of the seasons in New South Wales and Queensland but we've been lucky because our local market has kept us going," Mr Leek said.

The stud will also offer half-a-dozen breeding cows for sale during Beef Week.

Mr Leek said homo-polled bulls "are the way of the future".

He described horned bulls as a "thing of the past" and said studs like his were shifting their focus to polled animals due to increasing market demand.

"Abattoirs really don't want them and the local market and breeders in my area really want polled animals so our biggest aim now is to produce magnificent homo-polled bulls," Mr Leek said.

"If you put homo-polled over horned animals 98 per cent of them will be polled and if you put them over polled animals, you're really looking at 100 per cent and we've noticed a huge increase in demand for these animals."

Properties as far west as Edenhope and as far south as Bunyip in Gippsland took part in the challenge.

During the challenge, Mr Leek said he had been forced to take stock off his West Gippsland property months earlier after it received more than 500 millimetres of rain in the four months ending October.

"When I first started judging the cows had a longer, flatter muscle type and were a finer type of animal," Mrs Eden said.

"Simmentals are much heavier cattle now which is really good because you put vealers in the pens and that's exactly what you want but they can all still milk."