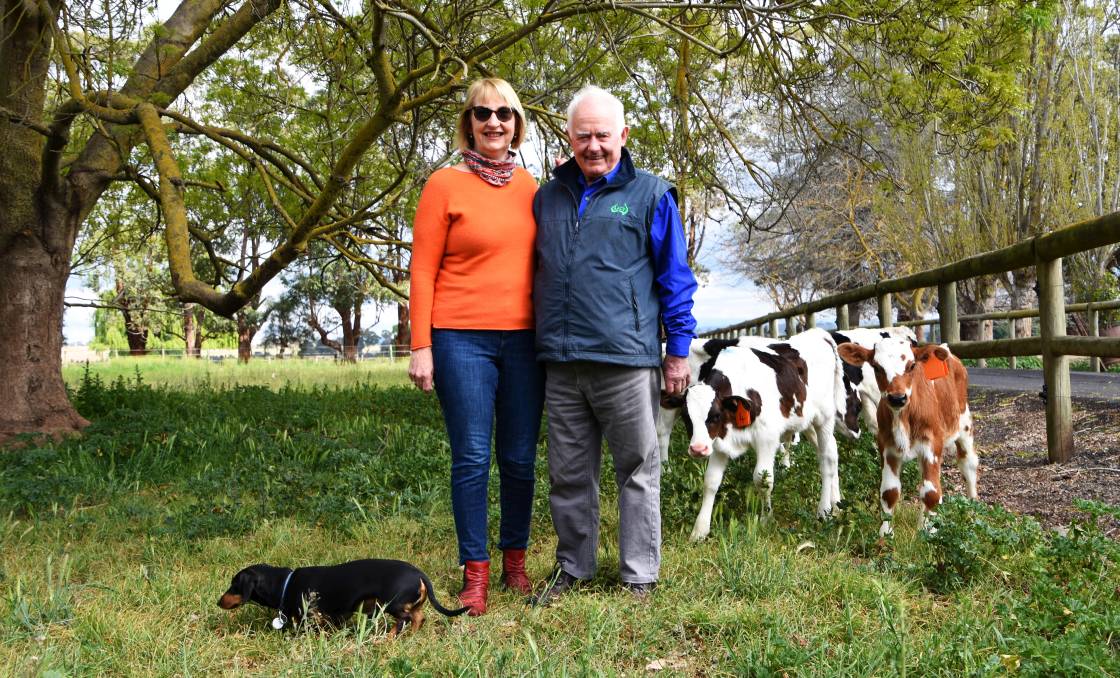 HYPERACTIVE: Jean and Jakob Malmo with their dog, Bertie, are "having a ball" running their two dairy farms after marrying this year and Dr Malmo's retirement as a vet.

Jakob Malmo says he's too old to be lying in the mud delivering a calf so Gippsland's legendary dairy vet has retired at 80 - to run two large dairy farms with his new wife, Jean.

Admitting others have described him as 'hyperactive', Dr Malmo is not one to sit still.

The achievements across his 58-year veterinary career are so many, it's hard to know where to start but the man himself was most proud of the Melbourne University Rural Veterinary Unit he and Professor Doug Blood established in Maffra.

"All of the Melbourne veterinary undergraduates in final year spent time working in the practice," Dr Malmo said.

"I have probably had 1600 young undergraduate veterinarians through this practice for training and anywhere I go in the world someone comes up and says 'Hey, remember me? I was with you 40 years ago?'

"That would be, I reckon, the highlight of my career."

While he does not mention other honours, Dr Malmo was made Officer of the Order of Australia, had a scholarship named after him, awarded the prestigious Gilruth Prize, and the second edition of the authoritative tome, Diseases of Cattle in Australasia, he co-authored was released this year. 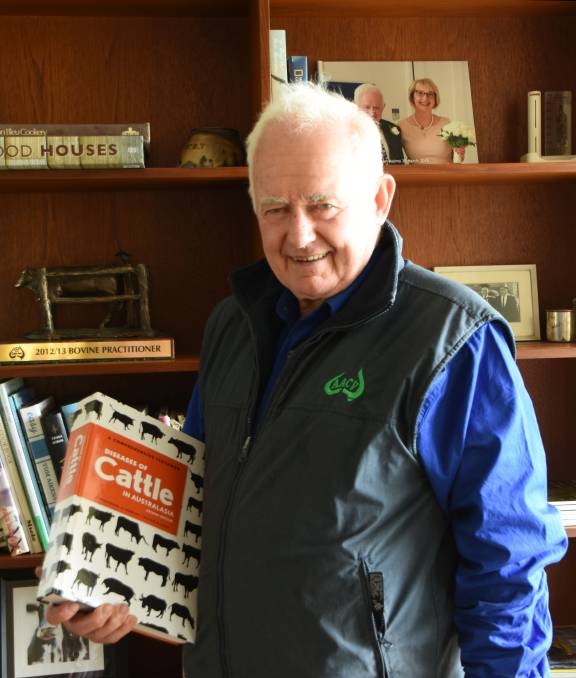 AUTHOR: The second edition of the authoritative 'Diseases of Cattle in Australasia' Dr Jakob Malmo co-authored was released this year.

A past president of the Victorian and national veterinary associations and professor, Dr Malmo continued to "dabble" in veterinary circles.

"I was very lucky to be working in a profession and have a job that I love doing," he said.

"I love going to work every day and my hobby would be dairy farming even though I didn't initially intend to get involved in farming.

"But my brother and my father bought a farm - my brother was a good dairy farmer - and my brother decided he wanted to sell that share to buy another farm.

"My father didn't ask me would I buy it, he said: 'Jakob, you will buy your brother's share of that farm. You will buy!'."

"I'd had sharefarmers at my Boisdale farm because I was too busy in veterinary practice to worry about running farms," he said.

"I now manage it myself with employed labour and I'm having a ball."

Almost all of the land is irrigated.

"Climate change may or may not be man-made but we're seeing a lot drier climates and we've got to work our way around it," Dr Malmo said.

"The Macalister Irrigation District (MID) is fed by the second most reliable dam in the country.

"Most years, the weir over-fills before the 15th of December - that's called 'spill' - and our water use prior to that is taken out and we start again.

"But it didn't spill last year and I'm frightened it might not spill again this year and that makes it tougher."

In fact, more water was needed.

Where 4 megalitres of water a hectare might have been the standard 30 years ago, Dr Malmo said around 8.5ML/ha was best practice today.

"You need to maintain moisture levels where the grass will grow optimally - if you stretch out the irrigation, it doesn't grow as well - which means we have a larger requirement for water than we used to have.

"Now, that water is used very productively and makes this one of the more productive areas of the state.

"Any attempt to provide farmers with less water can only have massively detrimental effects for the whole area.

Another 'hobby' common to Dr Malmo's veterinary and dairying careers has been a love of data analysis.

His office is set up like a control room, with two computers and four screens arranged in a semi-circle.

"If you don't, be it veterinary practice or farming, keep records and analyse them, you can't learn," Dr Malmo said, waving a hand at the technology.

Clients of the Maffra Veterinary Practice had contributed to a large data set over decades, yielding invaluable information.

"One of the biggest ones has been the problem with dairy cattle fertility," Dr Malmo said.

"Because we've been analysing fertility data on a fairly large number of cows for 25 to 30 years, we were able to say a number of years ago that fertility was declining with more empty cows and lower conception rates.

"For a while, people didn't take too much notice because, if the conception rate drops a half a percent you don't notice it much, but if it goes on for 15 years, you've suddenly got a problem.

"And that early information we had has subsequently been reinforced and that data has been used in the InCalf project one and two as part of their data set."

Dr Malmo is no less fastidious about his own dairy records.

"Every day, the factory provides me with the litres of milk, fat and protein," he said.

"That's entered every night into a spreadsheet.

"I know the number of cows being milked and what they're fed so every day I can look at my income over feed cost."

Detailed records of grazings, fertiliser, cropping and pasture growth rates are also kept, along with financials.

"One of the most important records I do is put the farms through DairyBase," Dr Malmo said.

"It is a Dairy Australia initiative for comparing performance and I'm amazed so many people don't put their figures in.

"We might measure anything we like but, if a farm is not profitable, you've got some bother."

Dr Malmo said he would like to see more pride in the dairy industry but lifting morale would take more than a better milk price.

"Many people say we need to see increased price for milk," he said.

"That's one part of the equation but the other part is we have to look at reducing our cost of production."

His own goal is to maintain a cost of production of less than $4 a kilogram of milk solids and said he had been able to achieve it "most years".

"Last year was the year from hell with ridiculously high bought-in feed costs."

"Just perhaps, some of us, and I include myself here, have gone too far in the way of bought-in feed."

His own farm fed its 480kg, strictly seasonal-calving, crossbred cows about 1500 kilograms of dry matter in the bail and produced about 500kgMS per cow.

Although the system worked well for him, Dr Malmo said it was important that farmers chose their own systems.

"If I was God, I would try and convince people to develop production systems that suit their area," he said.

"Don't try and produce milk to fit in with a milk processor's price system.

"Develop a production system, a whole system, that best suits the environment in which you live."

Dr Malmo's own environment, it seems, could hardly be more perfect.

Having remarried just six months ago and retired from veterinary practice in the same year, Dr Malmo admitted to being "very much" in the honeymoon phase.

"I still enjoy my involvement with both the profession and the farming community," he said.

"I've now moved to a new phase of my life where I'm enjoying a newly married life and I hope to keep going for a long time."