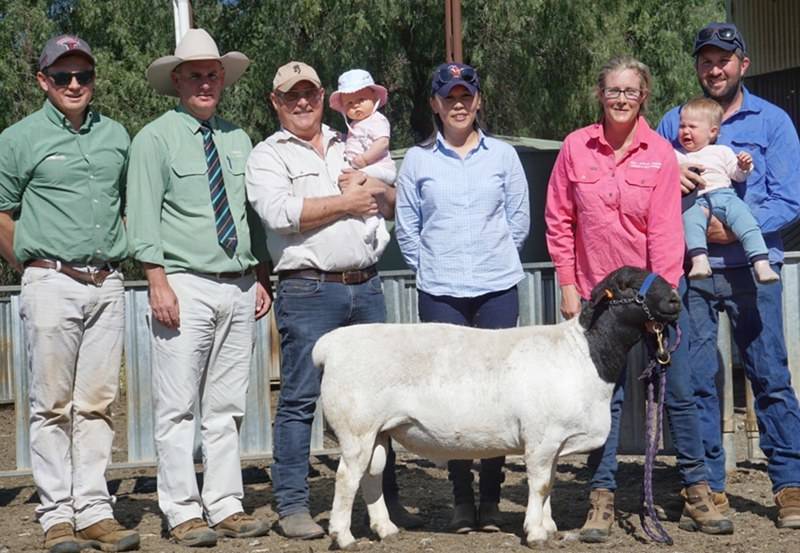 INTERSTATE buyers from Western Australia and South Australia were among the producers to take home Dorper and White Dorper rams from the Dell African Dumisa stud sale last week.

The Thyra, NSW, stud, north of Moama, NSW, sold 71 rams with three passed in and had 33 registered buyers at its sale last Tuesday.

"We were really happy with the sale because we were only expecting a 50 per cent clearance rate," stud principal Andrea Vagg said.

"A majority of the country up north where the Dorpers tend to go, around the Bourke and Wentworth areas, have had no rain."

Mrs Vagg said the sale grossed the same on the previous year's sale.

"The ewe flock nationally for Dorpers is down but they are more suited to drought," she said.

"It has had an impact on the demand for rams more generally because we've found buyers are more fussy with quality but we've had our sheep classed and the quality is up."

It also sold the top-priced ram at the Dubbo National Dorper Sale for $20,000, a record the stud has held for the past three years.

Top-priced Dorper buyers Matt and Zaya Wood, Goodooga, NSW, said they would use the $5000 ram as part of their embryo transfer program at Khan Dorpers on the Queensland/NSW border.

"Last year at the national sale we bought the top price ram Jackpot and we spent about $9500 ... he's a type five ram, he's structurally perfect.

"What we wanted to do is add some growth and speed and some more mass quicker and that's why this ram fits in with what we're doing."

Landmark Echuca livestock manager Lachie Collins said he was pleased with the results of the sale considering the dry conditions locally and interstate.

"It's a credit to the breeding program and quality of the stock and Dell Dorpers," he said.

"It certainly helps when repeat buyers come back and new buyers are always there because they're chasing new bloodlines."