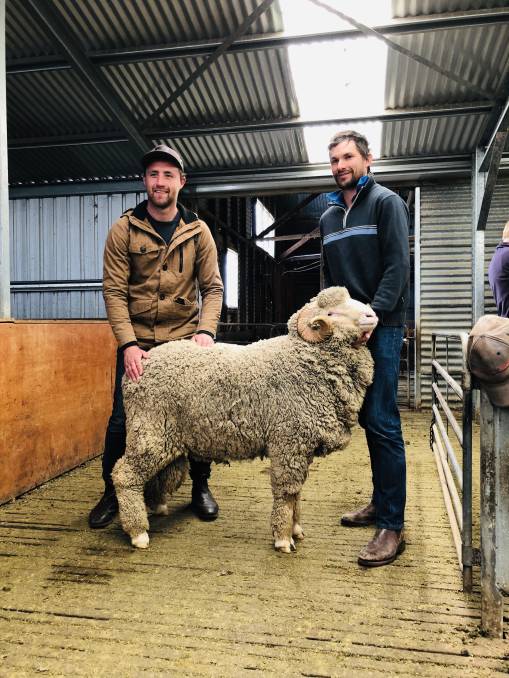 From the rams offered, 20 poll Merinos were sold to buyers while the remaining 39 horned rams sold well reaching a top price of $7250.

"The top price ram was sold to long-term and loyal buyers the Venning family who have been buying rams off us for at least 30 years now, " Mrs Crawford said.

"We're very happy with the quality of stud sheep sold."

Todd Venning, Kilmarnock, 15 kilometres south-west of Hamilton said the top price ram would be joined to his stud ewes in the coming months.

"We bought two rams from Rock-Bank, both of which we were very happy with," he said.

"In terms of the top-priced ram, we liked his skin and wool type there's not many ultra fine studs around in Australia anymore so when you see a good one you have to buy it."

"We went there with the intention of buying him and we'd seen him before the sale," Mr Venning said.

"Both of them we will join with specially selected stud ewes to breed our own flock rams.

"We've been buying from Rock-Bank since the 1980s and their rams' size, wool cutting ability for the ultra fine type and good doing ability is why we go back."

"We increased our sale numbers by about 14 head of sheep this sale and next year we plan to increase our numbers again because we have a lot of buyers who are still missing out," Mr Crawford said.

"Polls have also increased in numbers in recent years so we plan to have about 50 per cent polls and 50 per cent horn Merinos at our next spring sale in 2020."

Rock-Bank plans to expand its stud numbers to 1200 head this spring due to a good lambing percentage recorded in the last two years.

"Overall all we managed a lambing rate of 105 per cent, including a lot of maiden ewes," Mr Crawford said.

"We were very happy with that and that's mainly due to good pasture and a lot of shelter."