Six months after its launch, Sandy and Bridget Robinson have been overwhelmed with the response to their Woodlawn Lamb meat brand. 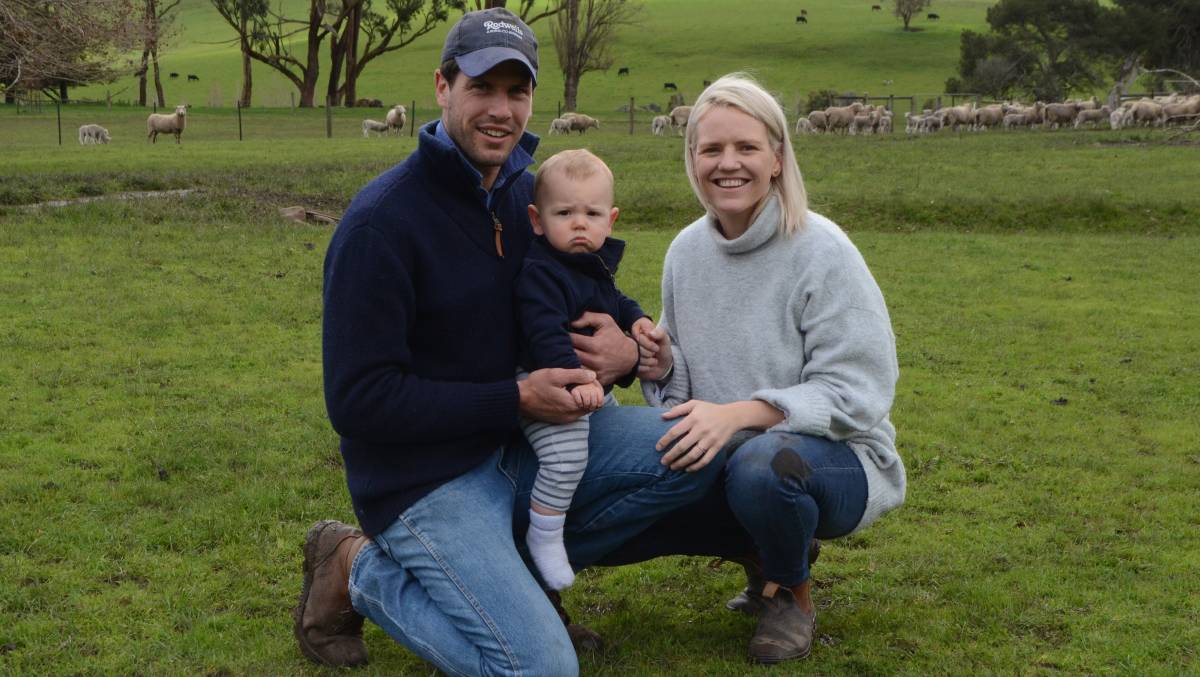 Six months after its launch, Sandy and Bridget Robinson have been overwhelmed with the response to their Woodlawn Lamb meat brand which is in strong demand from local customers.

According to the couple, the brand was developed to provide an alternative value-added market for their lamb, grown on the Robinson's family farm at Purnim.

And for Ms Robinson, who doesn't come from an agricultural background, the direct marketing initiative has also given her a way to be involved in the farm.

"Sandy and his family have always eaten their own home-grown lamb, but for me it was a big novelty," she said.

"We also had a lot of friends who were genuinely interested in getting some lamb and it snowballed from there.

"We were reluctant to do it as there are already plenty of other people selling their own branded lamb.

"But one night I sent a message about purchasing a box of Woodlawn Lamb and got 15 replies within half an hour.

"We realised if we can make it affordable and accessible, people are willing to buy lamb in bulk and they love the paddock to plate experience.

"We feel very fortunate to be able to enjoy our own lamb, so if we can share that with as many people as possible, that's a good thing."

Along with Mr Robinson's parents Bill and Di, they run a self-replacing flock of 1000 maternal composite ewes along with 200 Angus/Hereford-cross breeders on their 400-hectare property.

"My father originally ran Romney sheep, including a stud, and then switched to more cattle, but since I've been back we are building up ewe numbers again," Mr Robinson said.

The ewe flock is based on Coopworth genetics which were selected for their productive, maternal traits including high fertility and good mothering ability.

About 700 ewes are joined to Poll Dorset terminal sires to produce a quality prime lamb.

The remaining 300 ewes are mated to Coopworth rams sourced from the Tonissen family's Chrome Sheep studs, Hamilton, to provide the flock replacements.

After several months of development, the Robinsons carried out their first lamb order in April this year, sending several head to the Koallah abattoir at Camperdown, which were then marketed as a whole lamb.

"We wanted to test the waters and see how it would all work logistically, particularly in terms of the kill date and delivery to customers," they said.

"We were overwhelmed by the first lamb orders, it went really well which gave us the confidence to develop a brand and a logo and re-package it all.

"People are willing to pay in bulk as they know in the long run it will save them money.

"One thing we also didn't realise is the increased awareness of reducing wastage and food miles, so by purchasing a whole carcase there is nothing going to waste."

A carcase weight of between 20-22kg is targeted and next year the pair aim to turn-off about 100 head through the alternative market.

"A carcase size of about 22kg seems to work well in terms of the processing costs and also what customers can handle," they said.

To differentiate their product from other branded lamb, customers are able to select how their carcase is broken down, with options available for a range of different cuts which are then cryovaced and packaged ready for delivery.

"We send out an email and the customer sends back their order and it is as simple as that," they said.

"There is a slaughter fee per head and the butchering is charged on a per kilogram rate so it doesn't cost us any more regardless of how the lamb is cut up.

"We have tried to eliminate overheads and reduce marketing costs as much as possible so we can make the product affordable."

Although the Robinson's are still trialling demand, they have completed two more orders since April and plans are underway for a pre-Christmas lamb delivery.

Currently Woodlawn Lamb is being sold in the Geelong area and through south-west Vic including Port Fairy, Warrnambool and Koroit.

"At the moment, 15 head is about the biggest number we can manage between the two of us in terms of logistics.

"We want to make sure it is always our faces doing the delivery and quality control, we get a lot of satisfaction delivering the lamb from our farm, people love the story and the feedback has been very positive.

"Demand is currently through word of mouth and social media which has given us time to sort out the supply chain and delivery logistics."

The Robinsons said the direct marketing had proved profitable as it allowed them to set their price and in the future would reduce the impact of market fluctuations.

"When the market hits $10/kg you are probably better off selling them through the saleyards, but so far it has stacked up economically and offers us an alternative market if the spring supply checks."

With most of the lambs hitting the ground in early August, the Robinsons admit maintaining a consistent supply will be the challenge.

"Normally we aim to get half of the lambs out the gate as suckers while half will be retained and grown out," they said.

"Next year we will have to plan ahead and stagger some of the lambs to fulfil orders at different times."