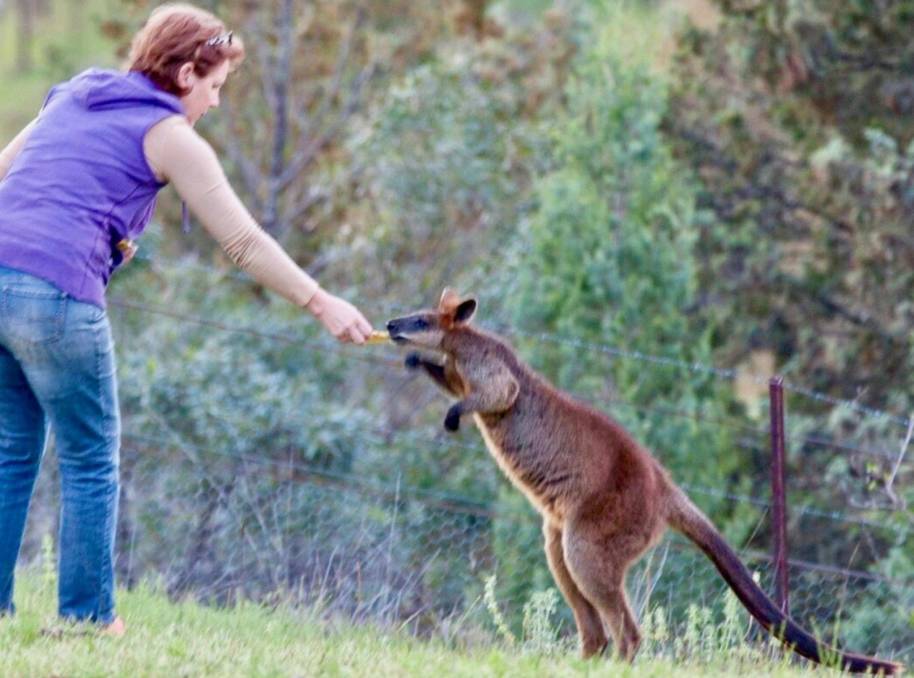 BANANAS: George the Swamp Wallaby has a love for fresh fruit on the Pride property.

Ross Pride's Mudgee mountain dogs, Harry and Ruby, now departed, were ever vigilant in their self-appointed mission of keeping the home paddock free of intruders.

Our Mudgee mountain dogs, Harry and Ruby, now departed, were ever vigilant in their self-appointed mission of keeping the home paddock free of intruders.

Humans would be comprehensively licked and tail-thumped, but anything with more than the statutory number of legs (two), was fair game for a bark and a chase.

That was until H and R grew old, of course, at which time a goat just outside the fence or a 'roo on the inside would be given a raising of the head, a narrowing of the eyes, and a growl, but that was about it.

One of the beneficiaries of their declining enthusiasm for chasing things was a swamp wallaby.

We christened him George (as in 'Wallaby' George Gregan), and alternated between cursing him for eating the roses and befriending him with the odd banana.

Then, one day, we met a George without the dangly bits. Georgina, as we christened her.

Just as cute/ugly, just as friendly, also loved snacks...hang on, she had the same nick out of the right ear as George.

And the same markings.

George was in fact also Georgina.

We worked out he could raise and lower his dangly bits at will.

I did think to myself that would be a handy skill, given some of the tiger pear and stinging nettle around here.

George/Georgina has become a fixture, and unless you let your fruit-holding fingers get too close to his teeth, he couldn't be regarded as carnivorous.

But wait! Should we be very afraid?

Animal expert and associate professor at the University of Sydney, Camden, David Phalen, was asked recently about the Lithgow Panther.

It, or they, has/have been rumoured to be on the prowl in the Lithgow/Blue Mountains/Hawkesbury area for years, and the good professor has a theory.

"Swamp wallabies have an unusual gait," he said.

"They carry their head low and their tail straight.

"They have a dark, sometimes black, coat, and I think if people are seeing the back end of one in the dark, they might confuse it for a cat-like creature.

"This may have resulted in a whole lot of 'panther' sightings."

Of course the reverse may be true.

Have some recent 'wallaby' sightings actually been of panthers? Should we be less cavalier about strolling into the garden, in case something much scarier than George is lurking?

And would the Penrith Panthers be treated with more respect by other NRL teams if they were called the Penrith Swamp Wallabies? So many questions.

It's a jungle out there, and we're armed with bananas.

The story A panther lurks in the garden first appeared on The Land.