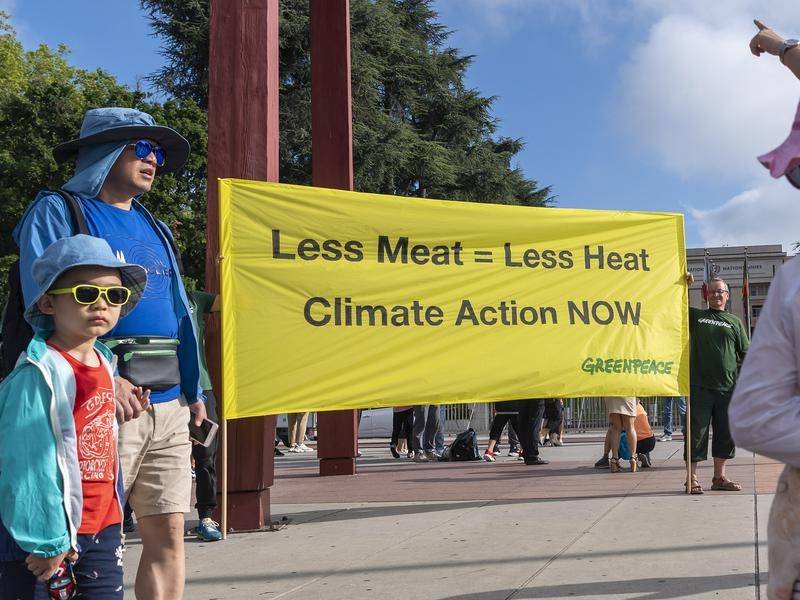 The UN is arguing for plant-based diets to curb emissions and free up land for sustainable uses.

The report by the UN's Intergovernmental Panel on Climate Change examined the relationship between land use and climate change and concluded global food practices need to be more sustainable.

It recommended increased sustainable land management practices to prevent land degradation and soil erosion, and also argued for plant-based diets over meat-heavy ones.

"This is a very, very important success story in Australia. Farmers, in particular, haven't been given the credit they deserve for the role, the enormous role, they've played on this front," he told ABC News on Friday.

But the minister brushed off concerns about the role meat-heavy diets play in climate change, suggesting the report was "forcing" people to become vegan.

"We're not going to tell people what they should be eating, that's just not the role of government," he said.

The Australian red meat industry has a target to be carbon neutral by 2030, she added, noting the local agriculture industry produced ust a fraction of the world's food and fibre.

But Ms Simson was surprised the report flagged reducing food waste as a means to reduce climate change.

"There are tonnes and tonnes of food that is wasted at the point of production," she told ABC News.

"Sometimes it's about misshapen vegies, carrots that look weird or those sorts of things, but also sometimes we just haven't got the labour to pick the produce in the fields.

"It's really important that we continue our focus on how we can do better at that here in Australia."

The IPCC is a UN body set up to assess science related to climate change, providing the information to world governments to help shape climate policy.

More than 100 experts from 52 countries prepared the latest report, drawing on work from 96 authors.

One-third of the food produced across the globe is lost or wasted, an outcome which has been linked to increased greenhouse gas emissions.

Farmers for Climate Action want the federal government to implement a national strategy on climate change and agriculture, and to speed up the transition to clean energy.

"With NSW marking one year since it was 100 per cent drought-declared ... and farmers across the country hurting from droughts, heatwaves and other extreme weather events, it is clear that climate change is already hurting Australian agriculture," the group said in a statement.

"Farmers are adopting climate-smart agricultural practices, including soil carbon sequestration. But agriculture cannot be left to carry the burden on this alone."