The Grasslands Society success and outcomes is based on connecting farming and science under one organisation. 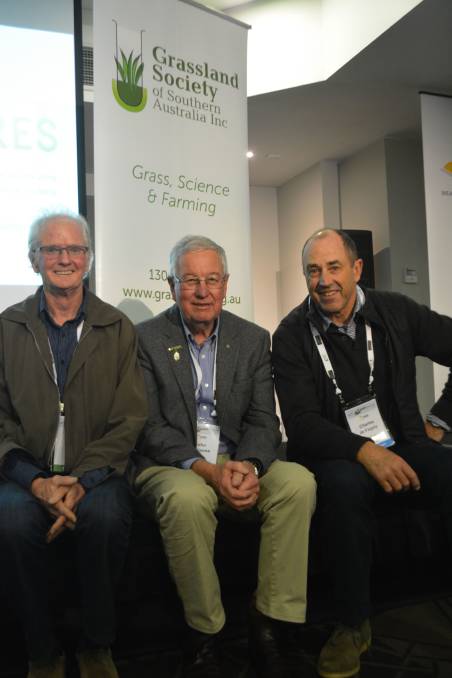 Linking science and technology with grassroots farming and production has been the key to the success of the Grassland Society.

The Grassland Society of Southern Australia has come a long way in the 60 years since a small group of farmers banded together in 1959 to help producers get the best out of their land.

During the annual conference last week, Gippsland agricultural consultant and GSSA life member John Gallienne outlined the history of the society, which he said continued to support livestock industries.

A member for almost 50 years, Mr Gallienne said the society brought together scientists and farmers.

"The society is a place where everyone can exchange information and hear ideas in a practical way that draws together the science and farming communities so both groups benefit," he said.

Mr de Fegely, who runs a pasture-based livestock property near Ararat, said the Grassland Society had been the basis of his production.

"Over the many years I've been involved, it has enabled us to get access to technology and link us to people that have helped to lift our production and profitability, and we've built up a lot of friendships and relationships along the way," he said.

Dr Hirth, from Albury, said the society gave farmers information and confidence to improve their systems.

"Grasslands connects all sections of the farming community. The fact that so many farmers come forward to share information demonstrates to fellow farmers what you can achieve and that is very encouraging," he said.

Originally formed as the Grassland Society of Victoria, it aimed to improve knowledge and interest in the production and use of pasture.

The formation meeting was held on September 21, 1959 in Melbourne and by October 7 there were 31 members.

The society aimed to produce quality reports for members and arrange meetings and field days to share knowledge in a logical and interesting way.

At the first annual conference in 1960, topics included the role of phosphate in pasture improvement and use of herbicides in pasture renovation.

more than 16,000 people, with many more involved in other activities.

The GSSA changed its name in 2003-04 to recognise branches operating in Tasmania and South Australia in addition to those based in Victoria.

The society has embraced technology through on-farm trials and demonstrations, including the Grassland Productivity Program from 1992 to 2004 which helped to re-establish the role of improved soil fertility as a driver of productivity.

It has also been involved in several on-farm research projects.

The GSSA now has about 580 members, about two-thirds are farmers and the balance were agribusiness consultants and scientists.