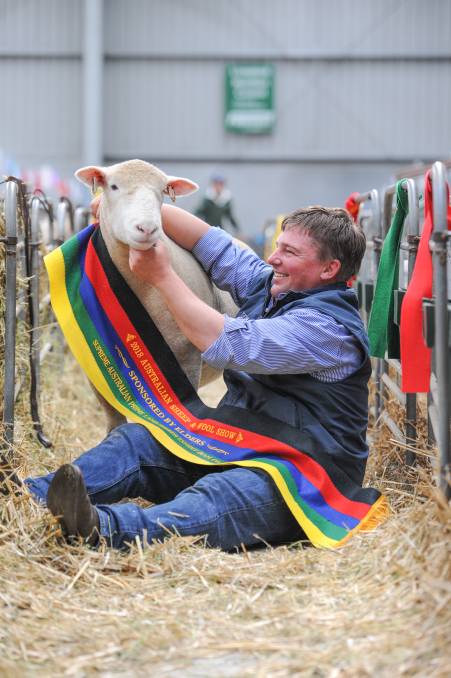 Apart from the unprecedented exposure Australia's largest sheep show provides for them, stud principal Brian Frost said it was the passion for the breed and the comradery of the exhibitors that kept them going back.

Although not every show has been accounted for in the memory banks, Mr Frost said last year's accolade of the supreme prime lamb exhibit of the show would have to be a standout.

A month before her win at Bendigo she was named the supreme exhibit at the NSW Dorset Championships at Cowra, NSW.

With the win came a rush of emotion from Mr Frost, who said it meant that much more when conditions were incredibly testing.

"You are going from one extreme to the other," he said.

"This win means even more, the emotions definitely build up."

Interbreed judge Wallace Binnie, Bungeet, said the ewe was the ultimate in fleshing, femininity and finesse.

"She was a sheep that could have stood on her own in the paddock or show ring," Mr Binnie said.

"She was a natural that didn't need to be pushed or shoved to get her to look at her very best; she's a top example of the breed.'

Last year Hillden were also named the winners of the supreme prime lamb group with their group of one ram and two ewes.

The judges, Mr Binnie, Nick Lawrence and Marilyn Stevens, said they were looking for an exceptional lead ram that was stronger than the ewes, yet the ewes had to be top breeders, and that is what they found in Hillden's Poll Dorset group.

Other memorable wins were the supreme Poll Dorset exhibits in 2007, 2011, 2014 and 2017, and most successful exhibitor wins on many occasions.

Mr Frost said the big sheep show was an excellent marketing platform for the breed, as well as a 'preview' for the next Dorset show and sale in September - the Australasian Championships - where they place a number of rams up for auction.

"It is a good lead up to the Australasian Championships, it gives a lot of the exhibitors and breeders a good look at the sheep before the major sales coming up," he said.

But for Mr Frost it's not all about winning a ribbon, it's about showing the best of the breed you are producing.

"We are trying to breed sheep with meat in all the right places, something that comes from years of selective breeding," he said.

"We pay a lot of attention to structural correctness and true Dorset type, and not concentrating solely on figures."

This year Hillden will be taking a full team of both rams and ewes to the ASWS.

Amongst the Hillden line-up will be 10 rams, most of which will be for sale at this year's Australasian Championships.

"We always offer three of our better rams at the Australasian sale," Mr Frost said.

At HIllden they run about 700 stud ewes annually with about 3000 first-cross ewes in the commercial flock.