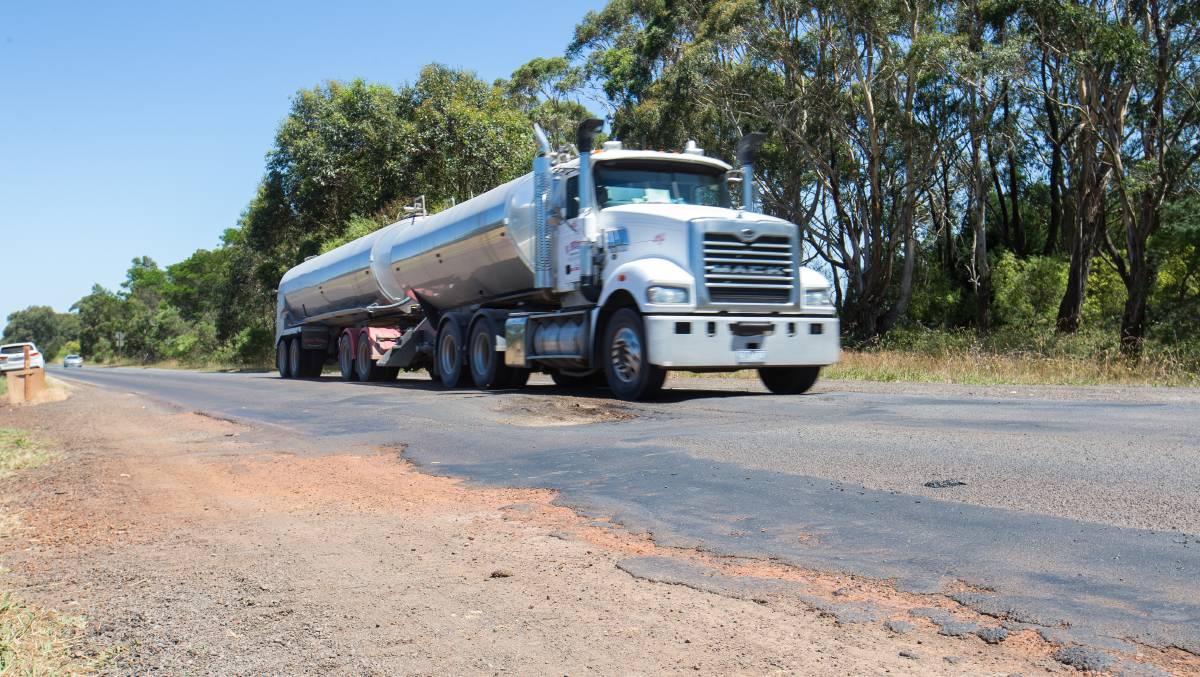 TRANSPORT COSTS: A leading economics consultancy firm has determined the transport cost of taking milk from the farm gate, processing it and shipping it as skim milk powder, to Singapore.

A new report estimates the cost of delivering a container of skim milk powder to Singapore.

A new report has found transporting milk from the farm gate in south-west Victoria, processing it into skim milk and then shipping the finished product to Singapore costs about $400 a tonne.

The Deloitte Access Economics report, 'The Impact of Freight Costs on Australian Farms', found transport represented 14per cent of the export unit value cost of freighting a tonne of skim milk powder to Asia.

Deloitte used figures from 2015-16, based on each stage of the typical distance from a south-west Victorian farm to a processor, delivering the finished product to the Port of Melbourne and then to Singapore.

"The total estimated freight cost incurred in delivering one shipping container of milk powder is $391 per tonne (inclusive of the raw milk freight costs from farm to processor) to the destination port in Singapore," the report found.

Transport of skim milk powder was one of several products examined in the report, which pointed out freight costs continued to dampen Australia's competitiveness on the international commodities market..

"In Australia, freight costs are highest for grains at 27.5pc of gross income, and fruit and vegetables at 21pc," Mr Harvey said.

"Knowing how much farmers pay for transporting their produce to consumers is crucial to measure the competitiveness of Australian farmers and to find out where the transport of agricultural goods faces pinch points and bottlenecks."

The report showed Australia had comparatively higher freight costs for many of its commodities compared to international competitors and that was hurting the bottom line. .

"Strategic planning and regulatory framework are required to ensure infrastructure can be efficiently utilised by industry," Mr Harvey. said

The study authors found that milk was transported 50km by road from farm to milk processor, at the cost of 0.025cents/litre.

Milk was processed into power at the processor, bagged, palletised and then loaded into shipping containers for delivery to port by road.

"The average cost to deliver one tonne of milk powder to the Port of Melbourne for export is $292."

"Seeking approval from road management authorities for the higher mass limits is time-consuming and expensive for individual companies."

Farms which could not accommodate B-double trucks also faced an additional cost, as semi-trailers were more expensive on a per-litre basis.

"However, upgrading farm access for larger, heavier vehicles can often outweigh the costs."

But regional dairy farmers and the State Opposition said the condition of roads was also adding to the cost of transporting milk to factories and processed product to port.

Last year, the government flagged what it said was the biggest road maintenance blitz Victoria had ever seen.

In addition to the record maintenance spend, a $100 million Fixing Country Roads fund was established to provide grants to rural and regional councils to fix their local roads.

This year, the budget papers said the government had invested $1.9 billion in Victoria's regional roads in the last four years.

It said $804m was being set aside for the regional road network.

"There's a further $425m to fix deteriorating roads and improve our primary freight corridors," he said in his budget speech.

She said there had been a $220million budget cut, this year, with virtually no money for regional road upgrades.

There was also no certainty for funding the Fixing Country Roads program beyond 2019/20.

"We have a crisis on country roads, most of the constituents coming through the front door at my office say the roads are appalling."

Ms Britnell said the government's "worst first" strategy, of giving priority to the roads that most badly needed it, was poor management.

"If you are going to buy yourself a new car and not spend any money on it, not put any oil in it, and wait until the engine dies, you are managing your investment poorly," Ms Britnell said.

"That's the government's approach to our rural roads."

Companies had invested in B-doubles, which did less damage to roads, particularly when they were turning.

"But they can't access some of the bridges, they can't use the most efficient route, so there are obviously additional costs."

Bernie Free, Winslow, said it wouldn't have been hard to work out the effect of poor roads and restricted access on transport costs.

"I've talked to a couple of fellows who cart hay, and they talk about the maintenance required on trucks, because of the poor condition of the roads," he said.

"They talk about the Princes Highway being a major highway, but it's not a major road any more, it's a goat track."

He said recent closure of the Princes Highway at the Shaw River bridge, Yambuk, for repairs had meant heavy vehicles were diverted onto unsuitable roads.

"They had to send them up two of the roads everyone complains about."

Diverting trucks from the highway also meant a reduction in the load that could be carried, pushing up costs as more trips were required.. .

"That's a cost that nobody really sees and the only person that wears it is the dairy farmer."

"It's very disappointing there has been a drop in budget funding, regarding roads.

"The other thing, of course, is the repairs and maintenance on trucks and vehicles, as a result of the poor condition of the roads.

"We, along with other farmers, absorb all those costs."

He said dairy companies and other trucking firms had the potential to increase the size of their vehicles to carry more milk or freight.

"The trouble is that roads and bridges are not up to standard, to benefit from that.

"That's a lost opportunity for profits to go back to dairy farmers."

Opposition Agriculture spokesman Peter Walsh said there was no money in the budget for the country roads and bridges program, as there had been under the previous Coalition government's $160m Country Roads and Bridges program.

"Those 40 councils across Victoria that got $1 million each year for four years really appreciated that money, which they could spend upgrading their road infrastructure," Mr Walsh said.

"Now that gap in their infrastructure funding will increase again because there is no country roads and bridges program.

Municipal Association of Victoria president Councillor Coral Ross said councils would welcome the State budget investment in local and country roads, but it was not yet clear how the money would be allocated.

"Councils are responsible for 85pc of the state's entire road network, and maintaining ageing road assets is a huge challenge for rural and regional councils," Cr Ross said.

"Last year's establishment of RRV, as a new division of VicRoads is a welcome step.

"We expect they will work closely with councils to determine the highest priority roads to receive funding committed in the Victorian budget.