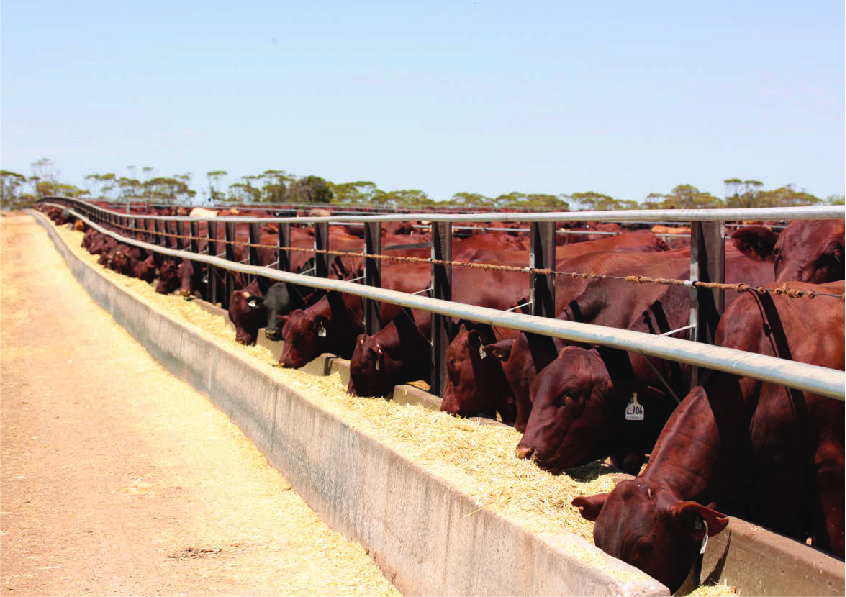 FEEDING FRENZY: Numbers of cattle on feed have hit record levels at the end of the March quarter as the impact of droughts and floods continues to bite hard.

Droughts and floods have contributed to a new record number of cattle on feed at the end of the March quarter.

Australia's feedlot industry is almost bursting at the seams with cattle on feed hitting a new record of 1.146 million head at the end of the March quarter.

National feedlot capacity also set a new record, up four per cent on the December quarter, at 1.363m, according to the latest feedlot survey by Meat and Livestock Australia and the Australian Lot Feeders Association.

ALFA president, Bryce Camm, said the number of cattle on feed continued to be influenced by dry conditions coupled with strong demand for high-quality Australian beef.

"The record level of cattle on feed for the March quarter was driven by an unfavourably dry summer resulting in more cattle moving into the feedlot production system," Mr Camm said.

"The record capacity and cattle on feed number, despite being faced with very challenging seasonal and climatic conditions, indicates how resilient lot feeding businesses have become and the important role they play in meeting our customer's needs," Mr Camm said.

MLA market analyst, Alex McIntosh, said during the past 12 to 18 months, high feedlot utilisation (84pc at the end of the March quarter) had supported national beef production through challenging seasonal conditions.

Growth in quarterly shipments to China were a standout, Mr McIntosh said, lifting 77pc from year-ago levels to 14,347 tonnes.

The China market had grown in importance to Australian grainfed exports in recent years, competing extensively for product with more traditional markets such as Japan and Korea.

Competition from a lift in US beef output had also challenged grainfed beef exports to these markets. March quarter grainfed shipments to Japan decreased 8pc year-on-year, to 32,958 tonnes while volumes to Korea fell 11pc, to 12,284 tonnes.

The national saleyard feeder steer indicator had averaged 261c a kg live during the March quarter, down 10pc on the same period in 2018.

Queensland and NSW completely dominate the feedlot sector with 653,528 head on feed in Qld at the end of the March quarter and almost 319,000 in NSW.