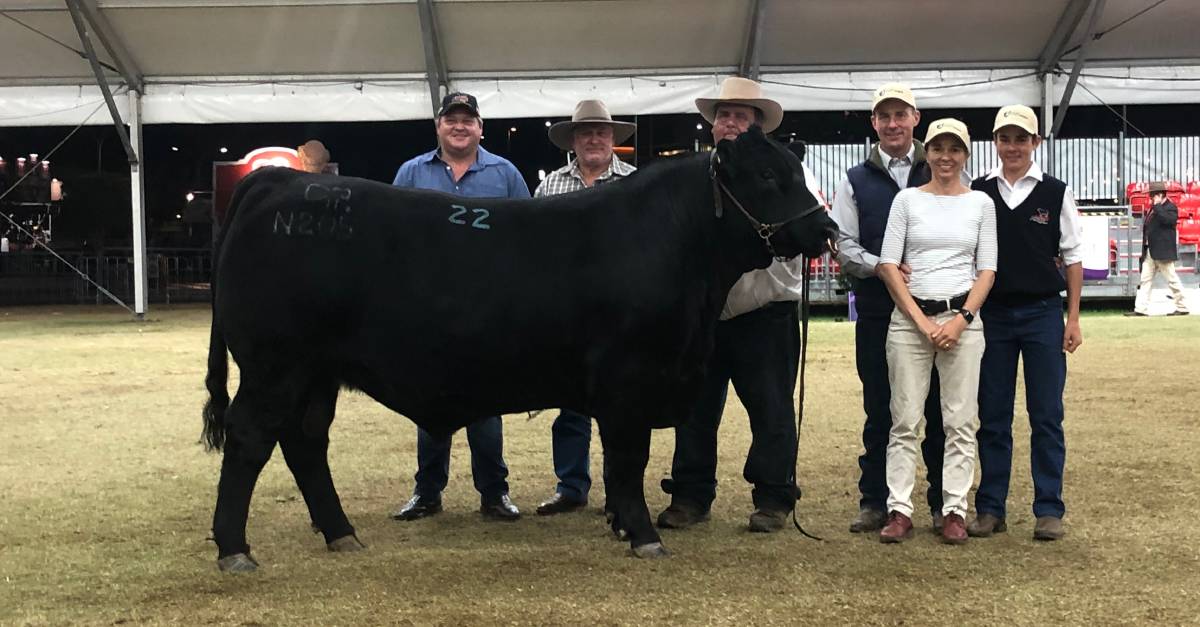 NEW Angus genetics were in hot demand during the RAS Angus Centenary and Feature Breed Sale, where a $34,000 top price was reached and a new Australian record for a semen sale was recorded.

Raff Necessity N205 was the $34,000 sale-topping bull that drew interest from many stud buyers for his unique genetics that combined bloodlines from the United Kingdom and the United States.

Purchased by Trent O'Donnell of Oakland Park Angus, Kempsey, the rising 19-month-old bull was sired by Raff Levi L165 from Raff Blackbird E280, and tipped the scales at 880 kilograms with an eye muscle area of 124 centimetres squared and measurements of 16 millimetres and 13mm in the rump and rib fats.

He was selected by Mr O'Donnell, who runs about 160 breeders, including 80 registered females, for his new genetics.

"I have always been on Raff genetics, but I was looking for a sire that would offer something new," he said.

"The more and more I saw this bull, the more he grew on me."

"In 2006, Anna and I travelled to South Dakota to the Hoff Scotchap dispersion sale where we bought four cows," he said.

"Over the next 16 months, 330 embryos were imported from these four females, and the mother of the top-priced bull here today was one of those embryos.

"In 2013, David and Jill went to the UK and imported embryos and the sire of this bull was the result of this.

"So this bull is new Raff genetics from two seperate trips to secure animals we phenotypically liked."

David and Vivienne Young, Londavra Angus, St Mary's, Tasmana, made the most of their trip to watch the Angus feature judging at the Sydney Royal Show, securing the $31,000 second top-priced bull Circle 8 Rearview Mirrow P105.

Commercially their prime piece of dirt sees them turn off milk tooth steers dressing 400kg while their on-property sale bulls also have significant daily gains on a grass preparation.

Having converted from Shorthorns to Angus in 1993, the couple were losing bidder on the top price Raff Angus bull. They then turned to the Circle 8 bull sired by Baldridge Command C036 from Circle 8 9108 Rosebud L103.

"I just liked his Breedplan figures, his softness and we want to keep the birthweight figures under control in our herd," he said.

An online bidder through AuctionsPlus secured the top-priced female, Raff Blackbird J460, that sold for $19,000.

The rising six-year-old was sired by Raff Empire E269 from Raff Blackbird E267, and sold with a bull calf at foot.

Semen packages hit a new Australian record when the final release of 10 straws of HF Kodiak 5R were sold for $1100 a straw. to David Adams through Elders Armidale.

Embryos sold to a $2000 top, for a package of four Pathfinder Genesis G357/KO Dream G68 embryos offered by the KO Angus stud, Kangaloon, and purchased through Landmark Yea, Victoria.

The story Angus Centenary Sale tops at $34,000 first appeared on The Land.