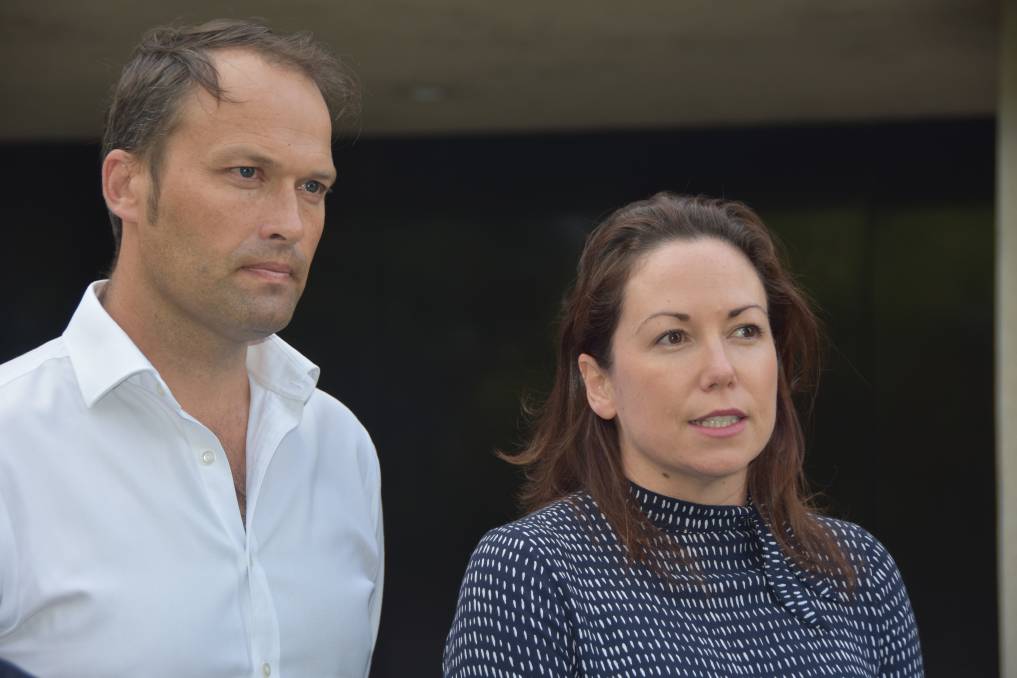 Police have charged 40 people, including two 17-year-olds and a 15-year-old, following a protest in the CBD.

Victoria's Agriculture Minister Jaclyn Symes has described vegan protests, in Melbourne and across Victoria, as outrageous.

"It's illegal, it's destructive, and I think they are undermining their own cause," Ms Symes said.

She said she would meet with police this week, to talk about the range of laws that could be employed to deal with such protests.

"There is trespass, there is theft, there are all sorts of misrepresentation offences - there are quite a lot of applicable offences," Ms Symes said.

"I'm interested in hearing about anything, that would discourage practices such as this."

Ms Symes said it had been a very distressing day for many farmers to witness what she said was inappropriate behaviour, on the streets of Melbourne and across Victoria.

"It was just not on, I condemn this behaviour, and we are here to stand with our farmers, our producers and country communities."

Police have charged 40 people, including two 17-year-olds and a 15-year-old, following a protest in the CBD yesterday.

Ms Symes said the arrests were part of the latest round of protests, but were part of an emerging trend, which was concerning for country Victorians and farmers.

"We have seen instances of trespass, intimidation and theft on farms

"We are working with police to ensure those people are brought to justice."

She said she was also outraged that the protest had involved children.

"I am outraged you have 12-year-olds sitting at the main intersection, in Melbourne, under the false pretence these people are there for a just cause.

"I support animal welfare practices, I support people protesting, but I don't support people, during peak hour traffic, making the city come to a standstill.

"It's outrageous, and I want it to stop."

But she stopped short of promising to strengthen laws, to combat such activism.

"When you try and strengthen laws, it's not always a silver bullet - I think what we need here is the police to be able to get on with their job, and deal with this behaviour, but also some cultural change."

"I want cultural change; I don't want people like this."

She said she didn't want animal lovers, of all ages, to think it was an appropriate way of getting their message across.

Ms Symes said she hoped those with good intentions on animal welfare would be persuaded against joining forces with the activists.

State National Party leader Peter Walsh said Victorian farmers should be able to go to work without fear of harassment, intimidation or threats against them, their family or their business.

"For months farmers and their family have felt unsafe in their own homes since their addresses were mass published online, making them the target of extreme activists," Mr Walsh said.

Activists trespassing on farms and stealing livestock were breaking the law.

"If current Victorian laws aren't protecting our farmers and the integrity of Victoria's biosecurity they must be strengthened," he said.

"The Liberal-Nationals stand side-by-side with our farmers and agriculture sector.

"We recently introduced a motion to State Parliament calling for a parliamentary inquiry to strengthen our state's farm trespass laws and defend farmers' rights."

He said despite the constant attacks against farmers and farm business, Ms Symes had been silent on the government's support for the inquiry.

Ms Symes said she wasn't opposed to such an inquiry.

"On its current terms, I think the terms of reference are a little bit narrow," Ms Symes said.

"I will be talking to Mr Walsh and Ms Bath (Nationals Eastern Region MP Melina Bath)about their motion, but there are many more things we can do than law changes."

She said farmers cared deeply about the animals under their care.

"What we want to see is what we do in agriculture to be promoted to a higher standard," Mr Jochinke said.

"We are not the enemy here, we want to try and produce the best food we can, and we want to be respected for that."

He said the protest showed the resolve of some of the activists was beyond what was socially acceptable.

"We want to make sure when people did feel that disruption (in Melbourne) that it's also happening outside of the city and that's affecting people's families, their communities and their businesses."

He thanked Victoria Police for their handling of the protests.

"Farmers respect their animals and invest heavily in research and development to ensure they are always adopting the latest science-based methods and to guarantee their end product meets a range of specifications to suit a wide variety of consumers from all around the world," Mr Jochinke said.

"While farmers and city-based consumers may at times live very different lives, we have many things in common.

"We value family and safety, we care for our animals be they pets or farm animals, and we pride ourselves in growing and consuming great food."