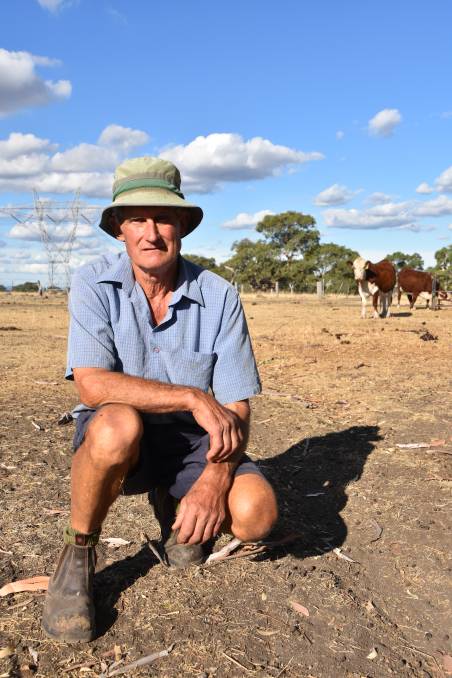 Livestock producers say red tape - and unrealistic expectations of what farming involves - are two of the biggest impediments to retaining agricultural production in Melbourne's peri-urban fringe.

The government has asked communities, councils, farmers and agricultural industries, around Melbourne's green wedge and peri-urban areas to help identify and protect what it says is vital agricultural land.

Cattle production takes place right around Melbourne, including on the Mornington Peninsula and the city's northern boundary.

Glen Goulburn Poll Hereford stud's Lynn Vearing, Epping, said while his property was not within the green wedge, its proximity to housing had brought its own problems.

His property is bounded by the Hume Freeway and industrial land.

"Most of the laws are there for everything else, but not for farming," Mr Vearing said.

"The environmental movement and city people seem to have more rights than the farming community does."

He said legislation had not kept up with the "right to farm.

"There are many different ways you can earn a living from farming; it doesn't just mean running sheep or cattle," he said.

Noise and amenity complaints were a significant issue for farmers, operating near residential housing.

"People grumble about the windmills making noise at night - they want to come out and live in the country, but don't want to put up with country life."

Mr Vearing said there appeared to be a different attitude towards agriculture, in Europe.

"We've been over to Europe, and they grow horticultural crops right amongst the houses, unfenced," Mr Vearing said.

"Land can be very productive, even in suburbia.

"I've seen them growing potatoes, berries, all those sorts of things - people don't damage the crops as they respect agriculture and appreciate what people are doing to provide food."

In Australia, crops were stolen, fences cut, and rubbish was dumped on urban fringe farmland.

Meridie Jackson runs cattle in the Yarra Ranges council area, to the north of Melbourne.

"Agriculture in our area holds intrinsic value to people that are part of other industries, such as tourism, or residents that choose to live in a rural area," Ms Jackson said.

"This means that agriculture has significant additional value over and above the income that can be generated from the land itself."

She said she had experienced the impractical restrictions, being increasingly layered over agricultural businesses.

"When I needed to clean silt out of a dam on my property. I had to apply for a permit that required many hours of my time, over many months, that could have been better spent running my business," Ms Jackson said.

"It was a complete waste of time and money for myself and the council resources involved.

"The real concern is that we will be increasingly bound up by regulations that dictate what can and cannot be done on our farms, which will only negatively impact our ability to operate and ultimately drive farmers to other areas where they can profitably exist."

The real concern is that we will be increasingly bound up by regulations that dictate what can and cannot be done on our farms. - Meridie Jackson, Yarra Ranges beef producer

She said it was the role of councils to pass laws encompassing agricultural areas, but they needed to spend time consulting with industry, so they could understand the impact on people trying to run farming businesses.

"Main Ridge is too far away; it's more the Moorooduc, Somerville, Mornington people who are at risk," Mr Wyatt said.

While he owned a small property, he also farmed land at three other locations on the Peninsula.

"People want to live with the land around them, but don't want the responsibility of running livestock, so I take that on."

He said he had been active in supporting peri-urban agriculture, for some time.

"The issue the government has to deal with is that the easiest land on which to grow vegetables is flat and sandy loam, with access to water.

"The best land developers like is flat, sandy loam - they both want the same piece of land."

"During the Strategic Agricultural Land Use consultation period, be aware of the competing land uses, in green wedges, and do not be complacent," Ms Brassington said.

"As this is a conversation of what land could or might be useful for current and future agriculture, it is not a straight forward box-ticking exercise of what farmland is protected and what will be kept.

"We, as Victorian farmers, still need to voice the Right to Farm formally, and voice our need for future agriculture use of our current available farmland."

She said the research being done by Deakin University had highlighted "crop creep.

"The climate might be okay in the Goulburn Valley today, but tomorrow the climate we need for apple and pear orchards may need to be south of the Great Dividing Range," she said.

"It's enabled the shire to put a line in the sand and say 'we wish to hold 60-70 per cent of the land mass, because of its suitable agricultural land."

He said the Peninsula's climate, soils, access to artesian and potentially recycled water and proximity to markets all pointed to its importance for food production.

"It's definitely a significant part of the food bowl of Melbourne," Mr Matt said.

"So it's more about drawing a line for a permanent urban growth boundary - anything over the other side of the fence should remain rural, forever."

He called on the State Government to resist calls to rezone parts of the green wedge.

Baxter horticulturalist, PenFresh Organic's Wayne Shields, agreed that in some places it would be a case of "too little, too late."

He said a significant factor, in protecting valuable agricultural land, was the provision of irrigation.

Plans to bring Class A, the highest quality of recycled water, to the Baxter area, seemed to have been shelved.

Mr Shields said he had always been puzzled by the extension of irrigation to Cranbourne and Devon Meadows, only to see the land there being sold to developers.

"I can't access irrigation, and I am floundering down here, in a dust bowl, at the moment."

He said Melbourne's green wedges were under constant threat and pressure from development.

"On the Mornington Peninsula, they have been really good - I doubt whether or not I would still be farming down here if we didn't have the good governance we had.

"But it only takes a change of council, or councillors, and all that work can be undone."

He also has a farm at Barham, on the Murray River.

"I am farming in both places, and I am a hell of a lot more efficient, down on the Mornington Peninsula," he said.

"The Peninsula has fantastic soil, and cheaper land, I am farming in both places, and I'm a hell of a lot more efficient down on the Peninsula.

"The one restrictive factor is the water."

Yarra Ranges council social and economic development director James Collins said the municipality had the largest proportion of green wedge land in all of the Interface Councils.

"We have a high use for, and demand, for this land for agricultural and horticultural purposes," Mr Collins said.

DELWP draft mapping had shown a significant amount of strategic agricultural land in the Yarra Ranges.

"Current arrangements with green wedge zoning serves our community well now, and into the future, ensuring land is available and dedicated to the use of agriculture and horticulture," Mr Collins said.

"This being said, green wedge policies must adapt to changing agricultural practices, so we can continue to supply our growing population."