SALE TOPPER: Witherswood Klooney N0157 was knocked down to Mary and Bill Goldsworthy, Eurobin, for $7250.

Ms Goldsworthy said the bull would initially be used over Hereford heifers.

"His docility, great confirmation and acceptable birthweight attracted us to him," Ms Goldsworthy said.

"He is a nice striding bull. We'll use him over our heifers, and he shall also accommodate the cows as he matures."

His docility, great confirmation and acceptable birthweight attracted us to him. - Mary Goldsworthy

He had an intramuscular fat measurement of +2.2 per cent.

"Many people aren't buying females and are probably selling cows."

Stud manager Ian Peake agreed seasonal conditions has an impact on the sale, which he still described as positive.

"Considering there are a lot of cows gone out of the system, some of our usual clients picked up some pretty good bulls," Mr Peake said.

But he said he was surprised that several new buyers came to the sale.

"Being our last sale, I thought it would mainly be our older clients coming along."

New buyers came from Tasmania and the NSW north coast.

"It was interesting to see some of the people who had bought females off us, but hadn't been to bull sales, came back and bought bulls."

He said the demand for the females was exceptional.

"There's not one female left on the property, with the majority going into studs or bull breeding programs," he said. 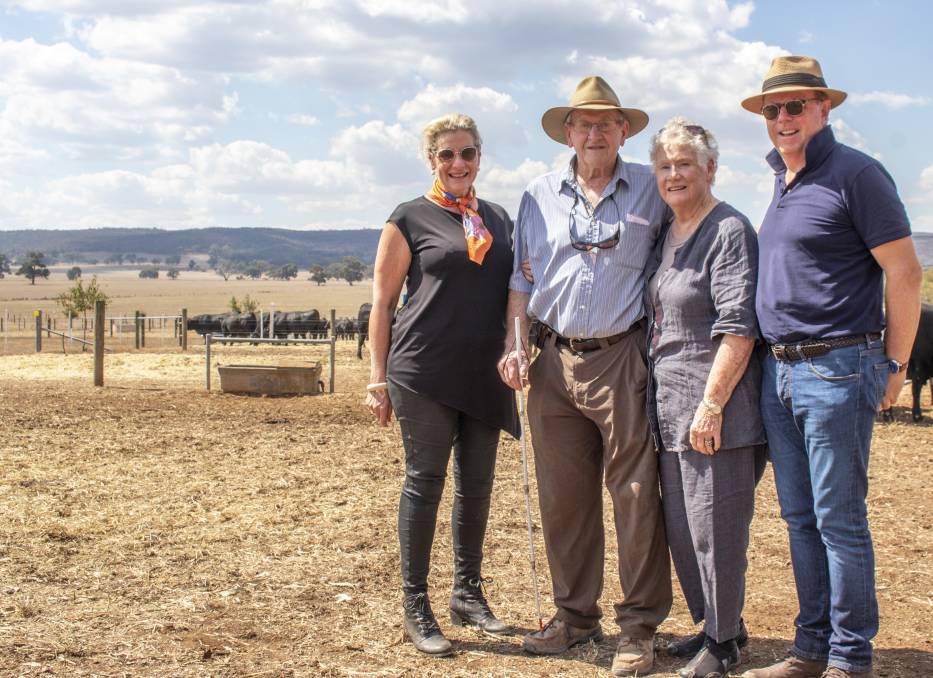 Witherswood made headlines when it joined a consortium to buy Millah Murrah Kingdom K35 for $150,000, the most ever paid for an Angus bull in Australia.

The Witherswood consortium also bought Millah Murrah Klooney K42 for $80,000, the fifth-highest ever recorded for an Australian Angus bull at the time.

The sale included 18 Kingdom sons and three sired by Klooney.

"Our genetic base is second to none," the stud's John Woodruff said.

"Our foundation cows were purchased from Booroomooka Angus over 20 years ago, and we were one of the first Victorian breeders to buy from the very successful Millah Murrah Angus in NSW."

Despite not reaching a total clearance at auction, Mr Woodruff said he was still very pleased with the result.

"I'm always happy; it's a tough, tough market at the moment and people have sold a lot of cows," he said.

"We had a big crowd, it was one of the bigger crowds we have had for a sale.

"It was a goodbye to the industry we have loved."

When asked what he was going to do, Mr Woodruff quipped, "I'm going to buy a farm".

"But we have plenty of things to do; we will find things around to keep active, there is plenty to do in life," he said.

"We'll sell our property over the next few months when we get a break, and things green up a bit."

Mr Woodruff said he was pleased by the many people at the sale who were "delighted" to have been able to introduce Witherswood blood to their herds.

"It's nice to see the Witherswood brand follow through, with the genetics the new owners are using to get ahead," he said.

"We are so pleased to be able to go out of a good industry, leaving behind genetics that are second to none."