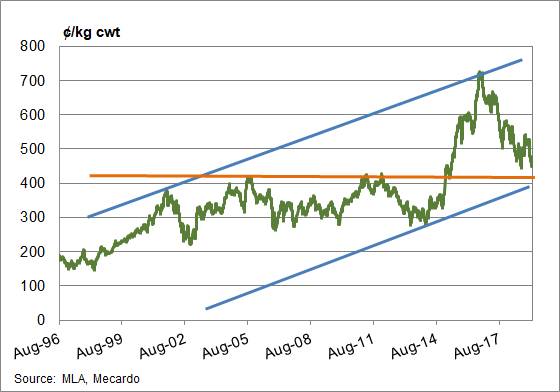 For much of the 2000 to 2015 period the EYCI met with significant price resistance at the 420 cents level.

Often when a market breaks through previous significant resistance this level becomes a key support area on the way back down.

From a long-term classical technical perspective, the EYCI should find significant support at the bottom of the trend channel, near the 400-420 cents level.

Technical analysis suggests that the EYCI would have found intermediate support near the 450 cents region. We have been holding ground around the 450 cents level for the last few weeks, but last week saw the EYCI slip lower.

Since the start of 2019, the EYCI has softened, but the weakening trend is running out of momentum.

Crucially, the recent price action of the EYCI compared to the Relative Strength Index (RSI) shows that there is some bullish divergence at the 425-435 cents level for the EYCI.

Bullish divergence is when price makes new lows, but the corresponding RSI fails to make new lows and usually means the market is ripe for a rally.

The same bullish divergence pattern occurred for the EYCI back in the May-June period of 2018 and subsequently, the EYCI rallied 50 cents.

All the current technical patterns suggest that the EYCI is nearing crucial support levels between the 400-420 cents region.

Expect to see young cattle prices across the Eastern states to find a base in the short term and begin to climb as we head toward the autumn break.