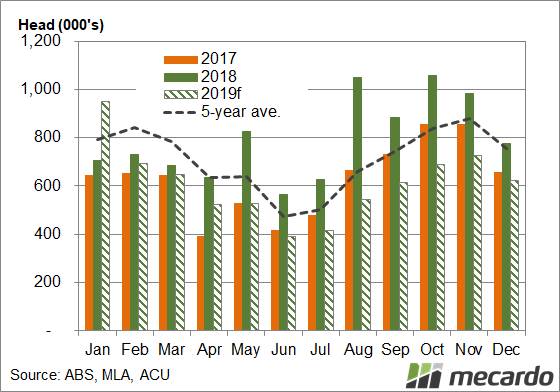 FIGURE 1: Australian sheep slaughter. If we take the projection for 2019 slaughter, of 8 million head, subtract estimated January slaughter and divide the rest by historical seasonality we get monthly slaughter as shown above.

If we’re not seeing the low for mutton prices now, we’re not far off it, says Mecardo's Andrew Whitelaw.

With the fast start to the year and continuing dry weather, MLA are not projecting 2019 to be the low for sheep slaughter as they are for lambs.

The flock did manage to grow 7pc in 2016-17, which suggests the flock is more fertile than in 2011, and a good season might see sheep slaughter around the 7 million head mark.

February to April slaughter should be down on last year, but not by much.

If we are to reach the 8 million head target, sheep slaughter will have to well back on last year from May to December (Figure 1).

Over the medium and longer term, things look equally rosy for mutton markets.

MLA don’t expect sheep slaughter to get back above 8 million head until 2022.

If we’re not seeing the low for mutton prices now, we’re not far off it.

The story Mutton closing in on a low first appeared on Farm Online.