Mecardo look at the impact of rising grain prices and a low supply of feeder cattle.

GRAIN-FED prices have not been immune to the marked movements in cattle prices since the year opened.

After a pre-Christmas rally, grain-fed cattle prices have been on the wane.

Input costs rose in line with the higher finished cattle prices back in December, but lotfeeders have not enjoyed much of a fall in feeder cattle or grain prices since.

Falling output prices and steady input prices have inevitably led to a squeeze on lotfeeding margins.

It seems respite might only come from rising output values.

There is little difference in the grain price between northern and southern zones, which is costing close to $400/t.

Feeder prices are 10¢ cheaper in the north though.

There has been a small fall in feeder cattle prices, likely due to the squeeze on margins.

However, at 307¢/kg lwt in the north and 317¢ in the south, prices are still pretty good on historical measures. 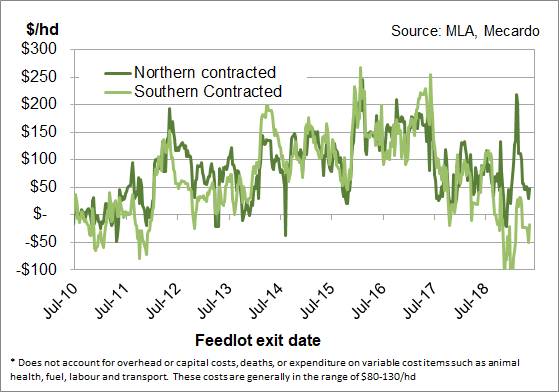 FIGURE 1: Gross margin on contracted steers after input costs. Northern lotfeeders’ margins are tight, and they are in the red in the south.

Strong feeder prices are no doubt due to tight supplies.

The herd liquidation, lower marking rates and lack of grass for backgrounding means lotfeeders have to pay 60-70¢/kg lwt over the Eastern Young Cattle Indicator (EYCI) to secure supplies of young steers over 400kgs lwt.

This is as strong a premium as we have ever seen.

With over 1.1 million head of cattle on feed, there has been room for grain-fed prices to fall.

With more unfinished and female cattle filling kills, it seems processors have been able to pull prices back.

Southern feeder margins are moving back into the red, and this is before overheads (Figure 1).

In the north, the $40-50 margin is keeping a floor in feeder values, although lotfeeders are likely breaking even at best after overhead.

It’s hard to see supply of feeders improving, or grain prices falling, so the hope for lotfeeders is tightening supply of cattle to processors which will see them coming to feedlots to fill kills.