FIGURE 1: Lamb slaughter and forecasts. The forecast slaughter in 2019 would be a significant step-down. Lamb slaughter is expected to grow from 2020 to 2022 to almost get back to the 2018 level.

SHEEP industry projections look very good for those who still have their flock intact. But the figures released by Meat and Livestock Australia suggest that many flocks are in fact not intact.

MLA have forecast 2019 lamb slaughter to fall 7 per cent.

These projections are based on the results of the October Sheepmeat and Wool Survey. The 21.2 million head that are expected to be slaughtered would be a seven-year low (Figure 1).

To reach MLA’s target, lamb slaughter will have to be lower than last year in every month except July, August and December (Figure 2).

The biggest deficit is likely to be in May, where last year a record number of lambs were slaughtered.  Our analysis suggests there could be 22pc fewer lambs slaughtered in May. 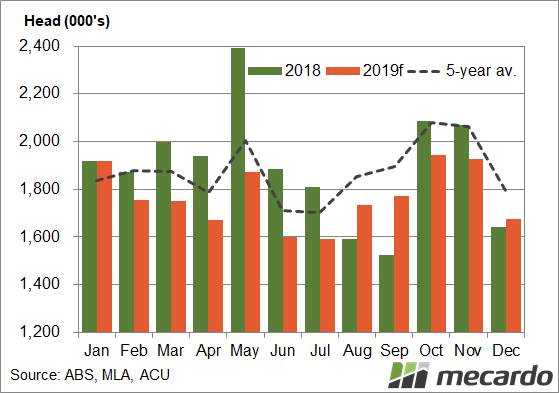 FIGURE 2: Seasonal lamb slaughter. If we apply the five year average seasonality to the 21.2 million head forecast and deduct slaughter of similar to last year for January, we get the seasonal supply curve.

With slaughter running strong for 2019 to date, there will have to be a significant decline in lamb supply at some stage over the coming months.

The timing of the supply drop off is likely to be rainfall dependent.

However, with limited ability to finish lambs on cheap feed this year and fewer lambs in total, the supply squeeze should come about earlier than last year, which was in June.

If slaughter runs strong, that simply means there will be fewer lambs to slaughter later.

With potential replacement ewes also going to slaughter, this will deplete lamb supplies for years to come.

It remains to be seen whether this is possible, but what it does tell us is that upside from currently levels is large and the forward price offers of 780¢ for June might be a bit light.