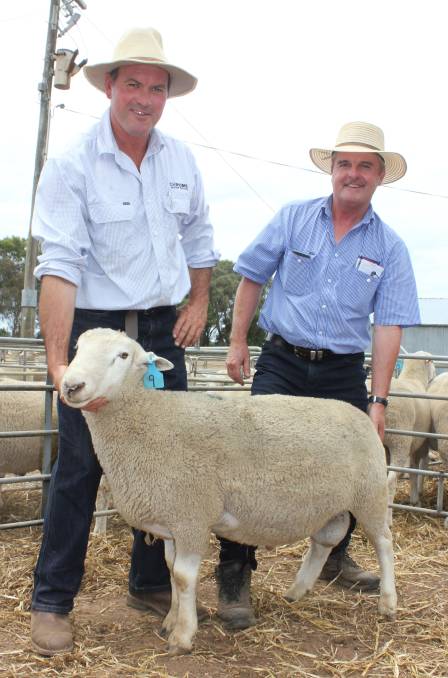 Chrome Sheep studs, Hamilton, has cleared all of its Southies and Poll Dorsets at its annual summer sale, as stud principal Matt Tonissen struggles to keep up with demand.

Local buyers were to the fore at the annual sale, which saw 232 rams go under the hammer.

“I think the Southies are something we are pretty excited about,” Mr Tonissen said.

“It’s certainly been one of the biggest areas of growth in our stud, in the last two or three years,” Mr Tonissen said.

“It’s testament to the drop of sheep we are producing.”

Mr Tonissen said Chrome had been running Poll Dorsets since it was founded, introducing Southies - a Southdown-Poll Dorset cross - about five or six years ago.

‘We set about breeding a terminal sire to serve our clients who were wanting to mate ewe lambs, maiden and Merino ewes.

“Their great attributes are their lambing ease and easy, soft doing ability.

“By all reports, the lambs are extremely easy to finish.”

But he said he was in the interesting position of trying to keep up with demand.

“I’m six months behind in my breeding  program, and I can’t catch up,” he said.

“I would much rather sell sheep, which are more mature.”

The backbone of the stud, Chromedales, still sold well, with the top priced animal coming from that section.

One of twins, it recorded Australian Sheep Breeding Values of -0.5per cent for post-weaning fat and a post-weaning eye muscle depth of 1.3millimetres.

“Most of the Chromedales went back into the area; a few went up to Wagga Wagga, which was the furthest afield,” Mr Tonissen said.

“They’re doing a good job for those guys.”

He said buyers took Chromedales to use in self-replacing maternal ewe flocks, to breed replacement females.

Kerr and Co Livestock’s Robert Claffey said it was a solid result, with prices back on the “heady heights” of 12-18 months ago.

“We lacked northern activity, because of the season, which hasn’t helped,” Mr Claffey said.

“Overall the fundamentals of what Chrome are doing, and delivering on, are very good.”

Buyers mainly came from the south-east, south-west and central Victoria.

Sponsored by
Rise in demand for grass-fed Tassie lamb.
Test
Victoria and Tasmania reach agreement for seasonal workers and return Australians
Test
The WVLX at Mortlake has grown with plans for new ventures in the pipeline.
Test
Turning off six to seven month old weaners is paying dividends.
Test
A large penning of 3591 cattle at Mortlake was soaked up at strong prices by a large gallery of buyers,
Test
Good prices continue as agents yard 4000.
Test
After establishing five years ago, Whiteline Speckle Park has continued to grow its herd.
Test
Little relief from coming heatwave until early next week.
Test