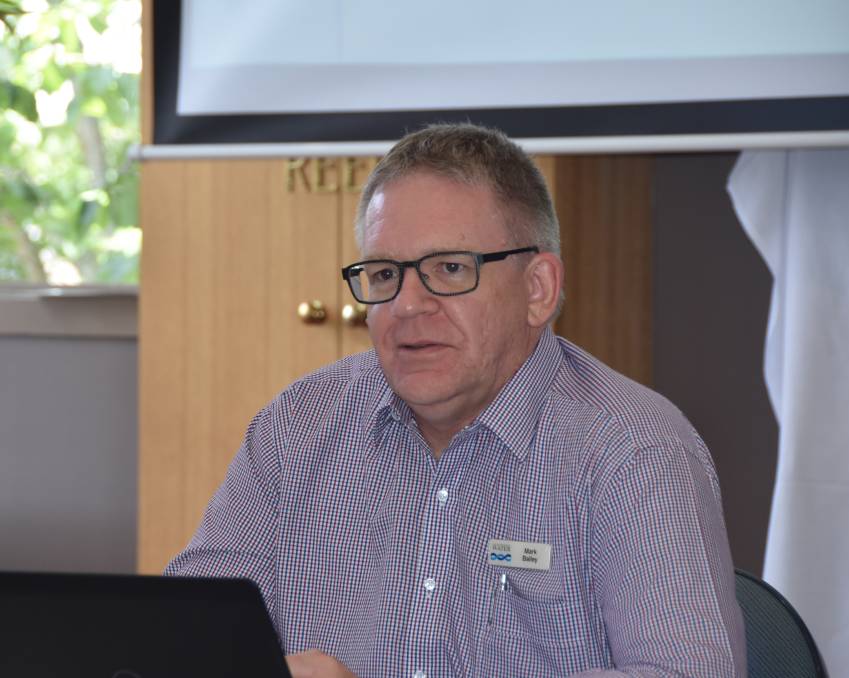 CAPACITY CONCERNS: Dr Mark Bailey, Northern Victorian Resource manager, has raised concerns about the amount of irrigation water that can be supplied to the Sunraysia region.

Climate, constraints, change in land use all combine to raise capacity concerns.

A senior Goulburn Murray Water manager has raised concerns the Sunraysia region is facing a serious shortfall in the amount of irrigation water for permanent horticultural plantings.

“In a dry year, there will be no water for half of that predicted expansion,” Dr Bailey said.

“Someone is going to be really, really unhappy, in 2027, if we are in a dry period,” Dr Bailey said.

“How that’s going to pan out is not something I want to contemplate,” Dr Bailey said.

He said his report was an amalgam of work by Goulburn-Murray Water, Lower Murray Water, Murray Darling Basin Authority and Department of Environment , Land, Water and Planning.

This is a sobering chart... pic.twitter.com/IrpmCuns0n

Dr Bailey said the higher risk, now facing irrigators, had been brought about by “a real period of change” in the operations of the Murray River and Southern Connected Basin.

Entitlement ownership had changed, as had the climate.

The Commonwealth Environmental Water Holder now had the biggest water portfolio, in both the Murray and Goulburn systems.

But there was a less likelihood of environmental water being released to the market.

“Unless something changes, in terms of legislation, the CEWH is looking more at delivery rights, than they have in the past,” Dr Bailey said.

“If there is a lot of demand in the river, all at once, the water holder has tended to say ‘I’ll let the consumptive water go first, meet those orders, and I’ll step back as part of a good neighbour policy’,” Dr Bailey said.

“There is no guarantee that will continue in the future; the water holder has been making that clear.”

He said if that challenge arose, it was going to be “a very interesting space” as to what that meant and who had priority over water delivery.

The climate was also playing an increasingly important role.

“We have been getting less of that spring break, which is something I am getting increasingly annoyed about, but we are also seeing more rain occurring in summer.”

He said some producers were pumping water up to 17 kilometres from the river.

“Goulburn-Murray Water is also interested in that because a lot of the water they are using is coming out of the Goulburn Murray Irrigation District.”

“It’s not an ideal situation, but that’s the way the market has developed.

“The climate is drier, and sunnier, and (the area) is really conducive to growing almonds.”

He said it was likely the Sunraysia would again face capacity issues, as it did in January, this year, after a burst of hot weather.

“The river level fell by 300 millimetres, everyone was hooking in simultaneously, to get water to their trees,” Dr Bailey said.

Compounding the problem was decreased capacity to push water past the Barmah Choke, on the Murray.

“The capacity has fallen by about 1000Megalitres since 10 years ago, that’s primarily due to it being pushed so hard, it’s starting to erode the banks.

“It’s reaching a point where the banks are starting to break out, at certain points.

“At the moment, there is an overbank flow, through the flood runners, in the Barmah forest,” Dr Bailey said .

Banks of the Barmah choke are eroding away. pic.twitter.com/RfS0PXwmP5

There were also concerns about putting too much water down the Goulburn, with both the regional catchment management authority and Victorian Environmental Water Holder worried about the ecological health of the river.

having an impact on the environmental health of the river

“That’s going to be a real problem if we find a limit as to how much water can be delivered,” Dr Bailey said.

“It won’t support all those developments occurring in the lower Murray.

“There hasn’t been an answer to that, and the Goulburn Catchment Management Authority is growing increasingly concerned.”

He said options to mitigate the risk included by-passing the Barmah Choke while taking water out of the Murrumbidgee and Menindee Lakes, was possible, but not likely.

GMW could also draw on Lake Boga, but because it had not been used for a while, salinity levels there were high.

“It’s going to be a real challenge, as to where the water is going to come from, to meet the demand,” Dr Bailey said.

It’s going to be a real challenge, as to where the water is going to come from, to meet the demand. - Dr Mark Bailey, Northern Victorian Resource manager

“It would be insanity to ignore all the painful lessons, learnt from decades past.”

“You can’t just go and build a house wherever you like, is it any different to that,?” Mr Morton said.

He said local government was hamstrung by State government planning laws but should be able to ask questions around risk management.

“Surely part of the development application process should give consideration to the risk associated with it, or at least have a process of identifying and working through the risks,” Mr Morton said.

This was particularly relevant when it came to risks involved with reliable water supply.

“Ideally, government’s don’t want to be telling people how and where to invest, or what to invest in, but there are lots of things governments do regulate.

“I think everyone can see what’s happening, but no-one is doing anything about it.

“You can’t just say, let the market sort it out, we regulate lots of markets, so I don’t know why this is any different.”