Check out the November edition of Smart Farmer here 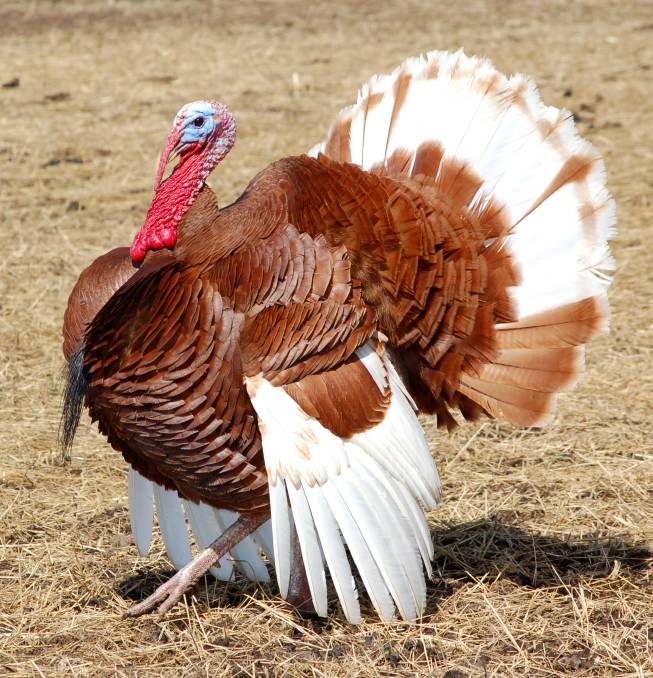 IMPRESSIVE: Flocks of Bourbon Red turkeys can be found in Australia. Photo: Shutterstock.

A couple of friends have mentioned that I have never written about their favourite poultry - turkeys.

I wonder whether it is the birds themselves or the taste that they love!

Turkeys are kept for the table and will be forever associated with Christmas in Europe and Thanksgiving in the US.

The original wild turkey was imported into Europe by the Spaniards in the 1600s and still exists in the Americas.

The breed has evolved considerably over time with the breeding of birds for human consumption and show.

In Australia turkeys at show are not common but good specimens can still be found.

Turkeys are commercially bred in the white variety, but in Australia flocks of Bourbon Reds, Narragansett, Bronze, Royal Palm and the slate/blue can be found.

These are recommended for backyards or farm type environments as they are very colourful and offer showing opportunities.

Turkeys can be naturally bred or incubated and like all poultry they need a safe, dry environment to do well.

There has been some discussion as to whether they should be kept away from other poultry because of disease but this point is debated amongst breeders.

The young birds need a high level of protein to grow and usually they are fed turkey starter which is higher in protein and readily available as it is used by breeders, myself included, for young chickens; especially fast growing birds like Campines and Araucanas.

Turkeys are also large birds, to make an obvious point.

They need a good amount of space and do enjoy a run outside to amble around and pick up the trace elements that are vital to their well being, especially when they are in ‘full production’.

Turkeys lay some eggs but the varying numbers depend on heritage and type as well as conditions.

Generally though these are an extra and birds are kept for the table.

The same care and rules apply to keeping turkeys as they do to general poultry although the young are probably more delicate than chicks.

When thinking about turkeys keep in mind the space you have and what you are keeping the birds for.

Turkeys look rather grand on lawn, but like all poultry, they can be destructive and are best kept away from prize gardens.

The story More than just good eating first appeared on The Land.