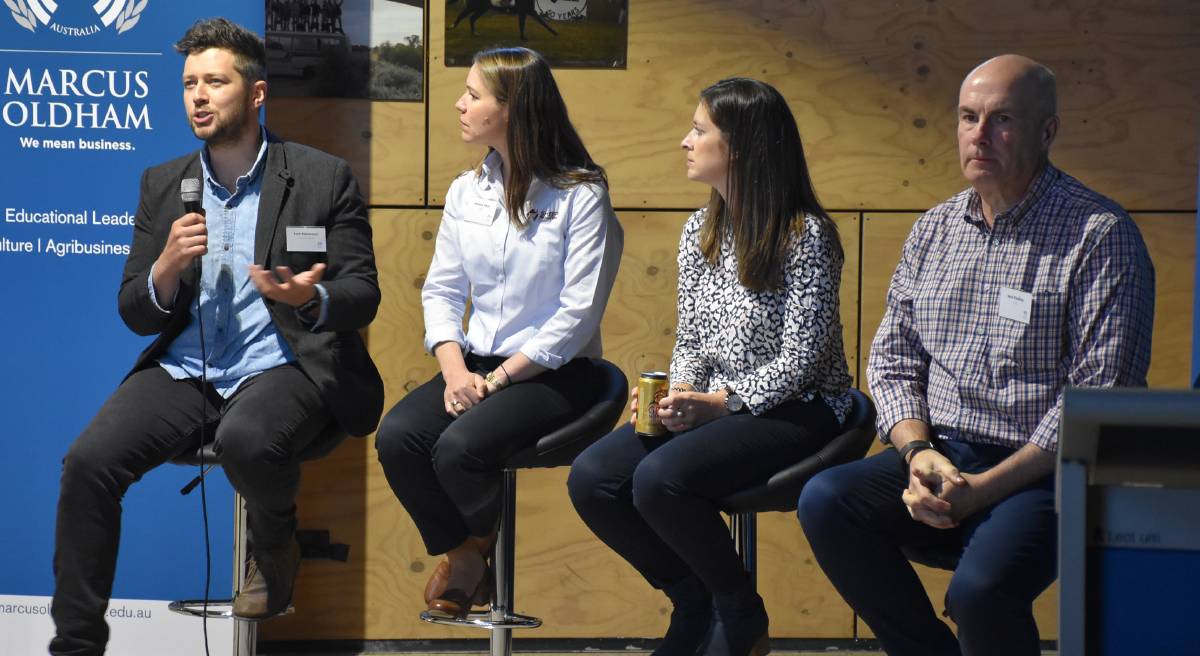 You need to be creative to get onto a farm, according to a panel of experts.

It is absolutely possible to own a farm, so long as you are prepared to hustle your way onto it.

That was the message from Cultivate Farms co-founder Sam Marwood, who spoke on the New Breed panel at Marcus Oldham College, Geelong, last week.

Mr Marwood has been working to flip the stereotype that you need to be a millionaire to be able to buy a farm.

“I grew up on a dairy from in Dingee and when I was eight years-old my old man laughed at me when I asked for the farm,” he said.

“He said I wasn’t getting it, because he and Mum were selling it to buy a house in town when they retired.”

He said from that age, intuitively, he knew he would never be a farmer.

But to fund that yourself was no easy feat.

He estimated that to buy a farm on the average Australian wage, a young person would need to save for roughly 32 years to be able to afford a deposit.

“We think that’s terrible, we want you on that farm as soon as possible,” he said.

While he had only recently come to terms with the fact that Cultivate Farms was the Tinder of the farm ownership industry, he said the business model was to be a matchmaking service between farm owners and investors and young people that want to get on the land.

“We should have called it ‘eFarmony’,” he joked.

He said the best way for the transaction to work was to build relationships.

“There are people out there with money, far too much money, and they want to buy farms and need a co-owner like you,” he said.

“And there are farm owners out there whose kids, for some crazy reason, don’t want the farm, and they need people like you to get on board.”

To find these opportunities, young people needed to network.

And while it might feel weird, the best way to do this was to find the places farmers nearing retirement frequented, for example the local pub.

“Money’s not going to fall out of the tree, so if you’re not out there hustling, who’s going to want to invest in you?” he said.

Mr Marwood has been able to make exciting phone calls to young farmers, who have been selected by investors out of Cultivate Farm’s database.

One investor picked a free range pig farmer from central Victoria out of the database, and now, he and his wife own a 50 per cent share of the new operation.

Just recently, he made another phone call to a young man who was selected by an investor who had $15 million in the bank to buy a farm.

And there are other ways you can get on the land, according to PricewaterhouseCoopers senior consultant Ginny Blair, who also spoke on the panel

Ms Blair works in the mergers and acquisitions space, and said the volume of transactions happening in agriculture at the moment had increased.

“There’s a huge amount of money being pointed at Australian agriculture,” she said.

She said this allowed for opportunities for young people who may not be able to afford to buy their own farm.

“There’s a lot of foreign money coming in and a lot of these funds need managers,” she said.

NAB head of agribusiness Neil Findlay also spoke on the panel, and said if you wanted to get on a farm, it would work in your favour to get your foot in the door straight away.

“If you haven’t got the money, there’s still an opportunity to start with something, whether it be a lease, or share-farming,” Mr Findlay said.

“If you have nothing behind you, no family farm to fall back on, it’s going to take some time, and it may require a mix of off-farm income and other support.”

He said it may not be the easiest thing to do, but it is certainly possible, as he has seen success stories.

The most important part was knowing where you wanted to go.

“The difficult part is when you get enough scale to grow, figuring out how to take the next step,” he said.

“I think it’s really important to understand what you want to do and where you want to go.”

He said the best way to go about this was to think laterally, and take on non-traditional opportunities that may arise.

What do you think? Is it possible to get on a farm? Comment below.