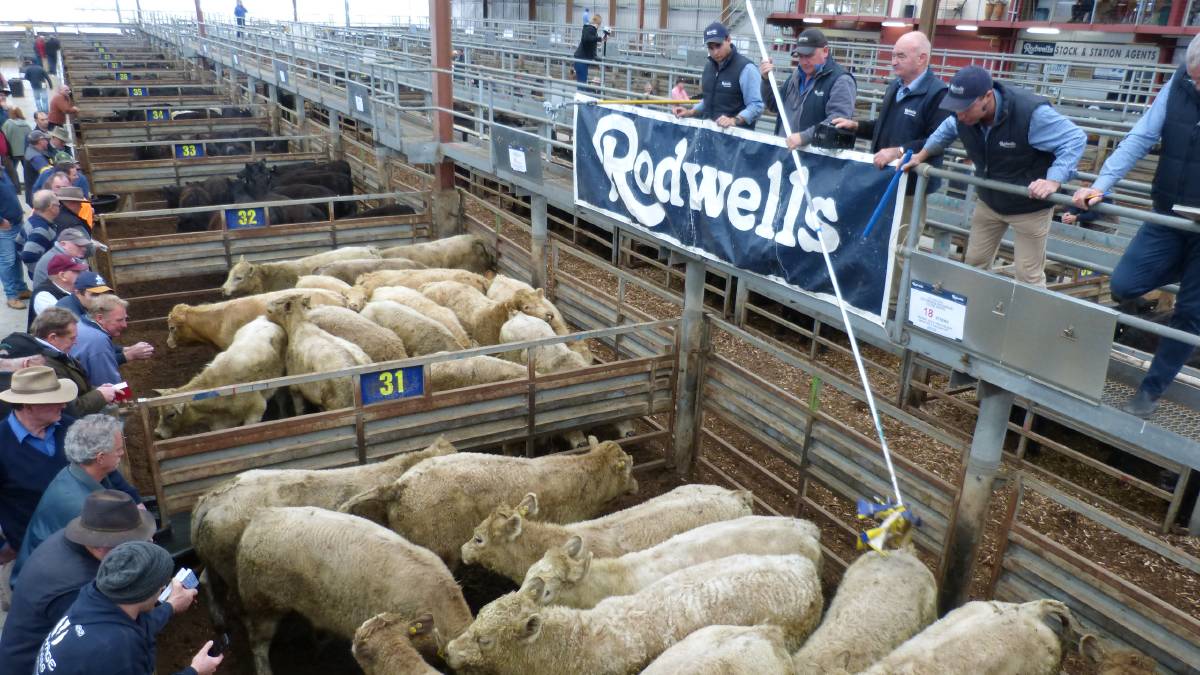 The recent store cattle sale at Pakenham saw an increased amount of competition from local graziers, thanks to recent rain in the region. This photo was from a sale earlier in the year.

The market at Pakenham’s store cattle sale last Thursday surprised agents, as it was up significantly on its previous sale a fortnight ago.

The market at Pakenham’s store cattle sale last Thursday surprised agents, as it was up significantly on its previous sale a fortnight ago.

Recent rain inspired confidence, with an eager buying gallery in attendance, looking to restock their properties.

Landmark agent Andy Grant said prices were “easily” $100 a head dearer across the board, with the cow and calf market performing particularly well.

Mr Grant said there were plenty of steer weaners making between $900-$1100.

He said this market reflected other local sales last week.

He said there was a lessened amount of drought-affected cattle coming from up north out of New South Wales, than there had been in previous sales.

“That lessened the numbers,” he said.

Feedlotters had been dominating the market in recent months, but he said on the day, they were being outbid by local graziers.

And he thanked the rain for that.

“Probably most parts had an inch to an inch and a half of rain earlier in the week, and it was mild afterwards,” he said.

“All of a sudden, most places are looking very good again locally.

“Everybody had rain, so that drove a lot of confidence.”

He said while there was still a long way to go, the rain came after what had been a significantly drier than normal season.

“It looks alright now, but we just need more rain,” he said.

Rodwells agent Anthony Delaney said the lineup was far better this sale than what had been penned up at previous sales.

“There were some particularly good lines of younger cattle, with a few runs of calves in very good nick,” Mr Delaney said.

“A lot of the heavier cattle were fairly forward too, having cleaned up after spring.”

He said this would have also contributed to the result.

“Especially heavier and medium weight steers sold to much better demand both locally and to professional buyers, which probably saw prices lift 10-20c/kg,” he said.

He said smaller cattle were not as dear, but still sold to great competition.

He said the rain up north also contributed to the result.

“The rain around at the moment has certainly helped,” he said.

But it was local support that really made a difference in the sale.

“It wasn’t through the roof, but it was certainly a hell of a lot better than previous sales,” he said.

“It was a pretty good, local yarding from Gippsland and Melbourne-based farms, and it sold accordingly.”

He said while the rain was well-received, they certainly weren’t out of the woods yet.