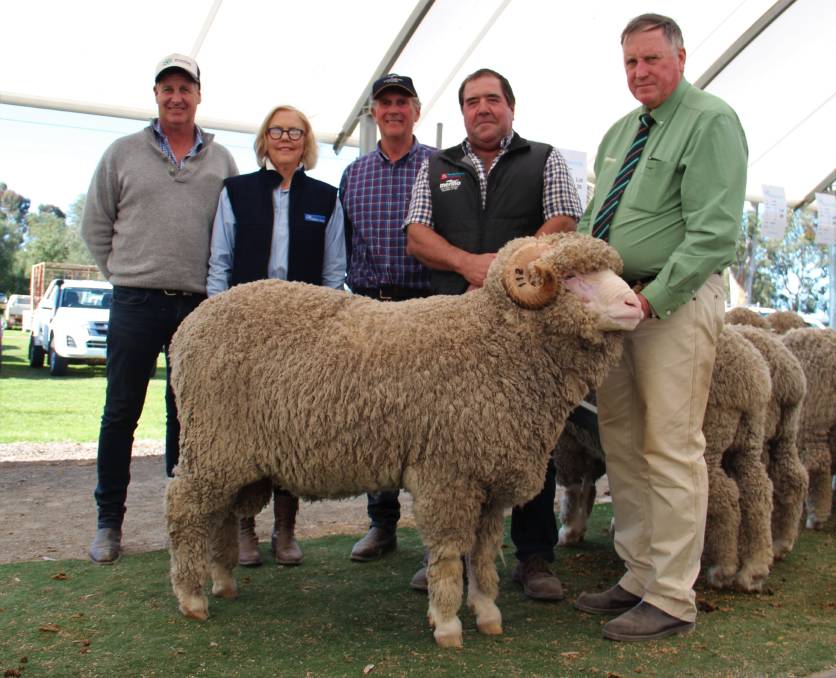 Confidence spurred on by strong wool prices has seen the Carter family of Wallaloo Merino stud, Marnoo, sell 185 rams to a record-breaking top of $52,000.

The impressive figure is believed to be a new national on-property record for 2018.

The $52,000 top-price was knocked down to Scott Pickering of Derella Downs Merino stud, Esperance, Western Australia.

Mr Pickering said he first saw the ram at Bendigo and was in the market for an impact horned ram.

“He fits in very well with our type, he’s got a bold, heavy cutting fleece on a good frame,” Mr Pickering said.

“It is really hard to find a good horn ram at the moment.”

Franklin Grazing of WA made a purchased of one ram for the third highest price of $14,000.

Volume buyer was Dhuramein Nominees, Balranald, NSW, who purchased 27 rams to a top of $3500 three times and averaging $2370.

Purchasing from the middle of the draft was Barmoul Nominees, “Belmont”, Barham, NSW, who loaded up with 12 rams to average $1500.

Landmark’s Andrew Sloan said it was a very even draft of rams presented by the Carter family.

“It was a terrific result with a strong average. It certainly showed the confidence in the industry we are currently experiencing,” Mr Sloan said.

Stud co-principal Trent Carter said he was thrilled with the sale.

“We haven’t had confirmation either way to let us know whether it beat the country-wide record, but nonetheless, it’s fantastic,” he said.

“We never thought that this would be possible, with how the Poll Merino industry is going.

“This ram really ticked all the boxes and the buyers were very pleased.”

“We’ve had years with higher averages, but it was a really good day overall,” he said.

“The rams that were passed over during the auction were all sold afterwards.

“Some people who turned up for the sale are in dire straights, but their outlook was extremely positive; these are people who are just passionate about the industry.”

The stud will head to the Marnoo Field Day on September 20. The sale was conducted by Landmark and Elders.